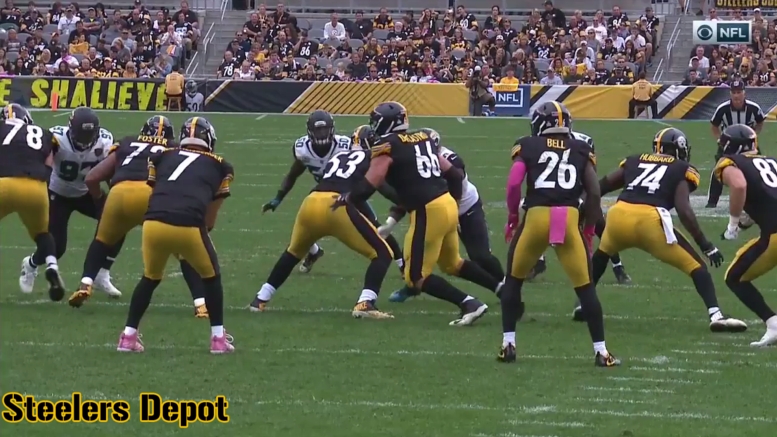 During his Tuesday press conference, Pittsburgh Steelers head coach Mike Tomlin was asked to talk about how much stock he puts into the tape from his team’s Week 5 home loss to the Jacksonville Jaguars when it comes to using it to prepare for the Sunday rematch against them. In summation, Tomlin said that he’s mostly interested in reviewing induvial matchup from that game more than scheme because teams evolve so much during the season.

On Wednesday, Steelers All-Pro guard David DeCastro was asked a similar preparation-related question during his interview on the ‘Mad Dog Sports Radio’ show on SiriusXM Radio. DeCastro was asked if he goes back and studies that Week 5 film of the Steelers loss to the Jaguars or if he’s more inclined to study more of what Jacksonville has done recently.

“A little bit of both for sure,” DeCastro said. “It’s always nice to watch some film of you actually playing the guys you’re playing against, but at the same time, there’s so much change that happens within a season. Obviously picking up great player like Marcell Dareus, watching film on him and just kind of watched them as they played in the last couple of couple of games and get a better feel, you know. Because we do the same thing. We changed a little bit, too, and the usual kind of ongoing transformation as the season goes on for any team, especially ones that are in playoffs.”

On the heels of the recently nationally published interview with Steelers safety Mike Mitchell that was framed as if he and his teammates are already looking past the Jaguars and ahead to possible rematch against the New England Patriots in the AFC Championship game, DeCastro was asked how he knows for sure the team will be “buttoned up” for the game against the Jaguars on Sunday and not looking ahead. In short, DeCastro was asked to tell fans of the Steelers why they shouldn’t be worried about the team being ready to play the Jaguars at Heinz Field on Sunday.

“Look at the performance we had last time,” DeCastro said, a reference to the Steelers 30-9 home loss to the Jaguars back in Week 5. “You know, they beat us up pretty good. We know we can’t walk in there and do what we did last time. We know that we’re going to be embarrassed if we do that and, yeah, I mean it’s all Jacksonville this week. I’m not even thinking about the Patriots. That’s hilarious. If you’re thinking about that, I mean, let’s be honest, both sides of the ball got their hands full.”

DeCastro was asked how he and the rest of the offense go about trying to make sure that they don’t have a repeat performance of that Week 5 game against the Jaguars on Sunday.

“It’s a team thing,” DeCastro said. “You know, everyone talks about the quarterback throwing picks, but it’s usually a lot more factors that go into it when turnovers happen like that. And it’s definitely one of those team-type games where everyone’s got to do their part, you know. They’re a complete defense, we’ve got to be a complete offense and we gotta be efficient. We gotta be in rhythm and we’ve got to hopefully get out to a nice lead and control the game. That’s the kind of game plan every game, so it’s a little cliché, but it’s just more emphasized when you’re playing against a defense that’s like I said, complete is the best word to describe them. Complete, elite, all that stuff.”