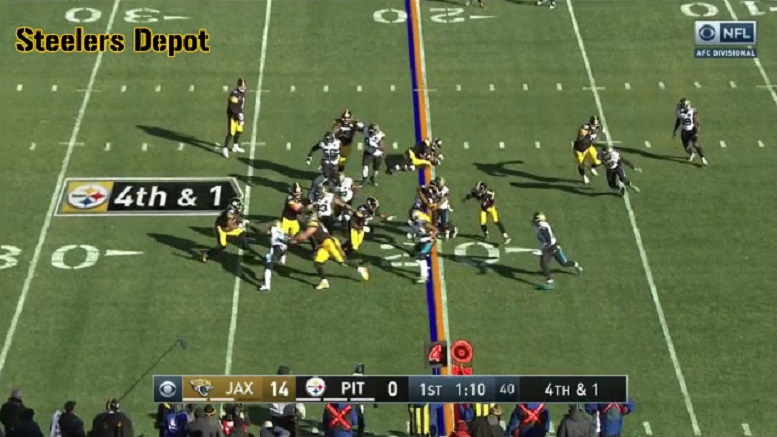 Did you take issue with the two fourth down and short play calls in the Pittsburgh Steelers Sunday Divisional Round playoff loss to the Jacksonville Jaguars? If so, we finally know where you can place the blame.

According to Steelers guard David DeCastro on Monday, both 4th-and-1 calls during Sunday’s loss to the Jaguars came from the sideline. In short, from Steelers offensive coordinator Todd Haley.

DeCastro just said both 4th-and-1 calls came from the sideline.

The first failed fourth down play, a crack toss to running back Le’Veon Bell, took place with 1:12 left in the first quarter from the Jaguars 21-yard-line and the Steelers trailing 14-0. The right-side pitch to Bell was easily strung out by the Jaguars defense and it didn’t help that Steelers tight end Vance McDonald seemingly whiffed on his block attempt on Jaguars cornerback Jalen Ramsey.

Even if McDonald makes the block, Bell still likely would have been tackled short of the first down marker. On that play, it looked as though Steelers quarterback Ben Roethlisberger might have audibled to that toss play, but if we’re to believe DeCastro, that wasn’t the case.

The second failed fourth down play, an incomplete pass from Roethlisberger to wide receiver JuJu Smith-Schuster, took place with 12:50 left in the fourth quarter from the Jaguars 39-yard-line and with the Steelers trailing 28-21. That play, which utilized a play action fake to Bell, was run out of the same formation as the first failed fourth down play was.

On that play, it also appeared as though Roethlisberger may have audibled to it. Additionally, it looks as though Smith-Schuster might have been held on the play by Jaguars cornerback A.J. Bouye. The referees, however, obviously thought otherwise as no flag was thrown.

With the Steelers season now over and Haley’s contract expiring, it will now be interesting to see if he’s signed to a new contract. If that doesn’t happen, Steelers quarterbacks coach Randy Fichtner would likely become the favorite to succeed Haley.

We’ll likely find out very quick whether Haley will be back. DeCastro, by the way, said the team’s offense has a ‘great’ relationship with Haley and that everyone gets along well.

Steelers OG David DeCastro said offense has a 'great' relationship with OC Todd Haley and everyone gets along well. Feels right nucleus in place but adds, 'the business is tough so we'll see.'