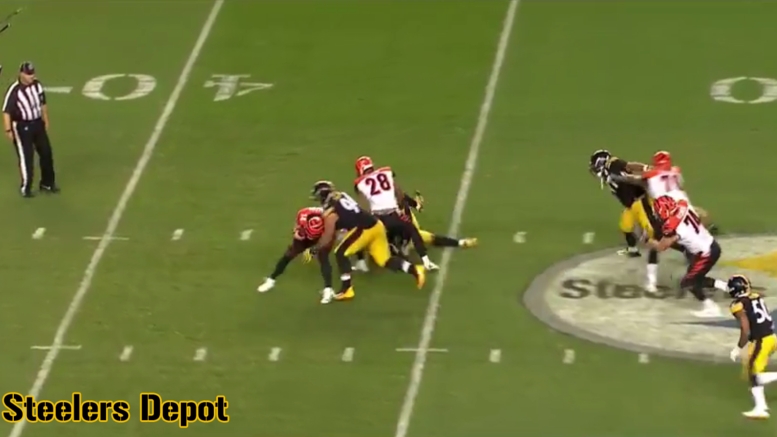 We’ll continue on with this series with a look at the 4 sacks that Steelers defensive end Tyson Alualu registered during the 2017 season.

While Alualu’s first sack of the season in Week 7 against the Cincinnati Bengals was essentially a cleanup one thanks to outside linebacker Bud Dupree missing quarterback Andy Dalton, it’s a fairly high quality one for him just the same. At the snap of the football you’ll see Alualu swat away the arms of Bengals right tackle Jake Fisher and then explode through the B-gap just in time to finish what Dupree couldn’t. This was a nice and quick one-on-one win for Alualu

Alualu’s second sack of the season came in Week 8 against the Detroit Lions and it happened on 4th and goal play from the Steelers 1-yard-line. While technically a clean-up sack thanks to the initial pressure on Lions quarterback Matthew Stafford by Dupree, Alualu shows a nice spin-off counter move back to the inside against right tackle Ricky Wagner. That counter puts him in great position in the middle of the field to corral an escaping Stafford. Would Stafford have scored had Alualu not gotten back to the inside? It’s hard to say and it’s a good thing the Steelers didn’t have to find out.

Alualu’s third sack of the season didn’t come until Week 17 against the Cleveland Browns. On this 1st and 10 play, Alualu rushes to the outside of Browns left tackle Spencer Drango. He turns and engages Drango and slowly walks the tackle back into the pocket where he can get his hands on Browns quarterback DeShone Kizer. While it takes over 5 seconds for Kizer to officially get sacked on this play, Alualu has his hands on the quarterback in a little more than 3 seconds. Kizer, by the way, had a crossing wide receiver open as well as potentially an inside breaking tight end in the middle of the field.

Alualu’s final sack of the 2017 season also came in the finale against the Browns. On this fourth quarter play the Browns appear to have a blocking scheme issue as a result of the Steelers looking like they are going to rush five on 2nd and 8. At the snap, the Browns left guard slides protection to his right and blocks stunting Steelers defensive tackle Javon Hargrave and that allows Alualu to have free access to the backfield where running back Isaiah Crowell awaits him. This is a clear mismatch and it’s obvious that Crowell wants no part of the large defensive lineman. Alualu runs right through the half-hearted blocking attempt by Crowell to record an easy sack of Kizer.

Summary: Alualu’s first season in Pittsburgh with the Steelers certainly wasn’t an awful one. He was fairly solid against the run during the 2017 season and while never known as overly productive pass rusher during his career, he still managed to produce 4 sacks and 13 total pressures in less than 250 pass rushing snaps. Of his four sacks, we can probably classify at least 2 of them as high quality ones and maybe even three of them. Alualu is perhaps one of the best backup defensive ends that the Steelers have had in the last several years and he’ll be back in 2018 looking to improve on his 2017 stats.