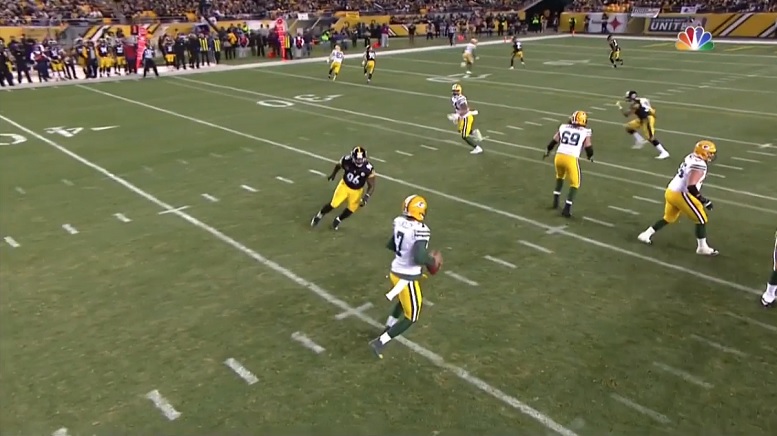 We’ll continue on with this series of posts by looking at and contextualizing the 2 sacks that Steelers defensive end L.T. Walton registered during the 2017 season.

Walton’s first of two sacks of the 2017 season came in Week 11 against the Tennessee Titans and in the fourth quarter. On this play, Walton initially drops off the line to not only secure the outside edge, but spy the running back as well. After being flushed up into the pocket by the pass rush of Steelers defensive end Tyson Alualu, Titans quarterback Marcus Mariota is ultimately tripped up by a diving Walton. while not a high-quality sack by walton, he showed good awareness on the play and effectively stopped Mariota from escaping.

Walton’s second and final sack of 2017 came in Week 12 against the Green Bay Packers. On this third quarter play, Walton scrapes around the right end as containment and in doing so he gets himself somewhat into the throwing lane of Packers quarterback Brett Hundley and his tight end coming across the formation. After rolling out following his play action fake to the running back, Hundley decides to step up and ultimately turtle to take the sack.

Summary: Walton, as most of you already know by now, is never going to be a premier pass-rusher. Walton has, however, showcased himself to be a fairly smart and dependable player during his career in Pittsburgh and will likely be on the back-end of the defensive line depth chart once again in 2018. Walton played just under 150 defensive snaps in 2017 and just under 90 of them included him rushing the passer. He totaled 6 pressures during the 2017 season.