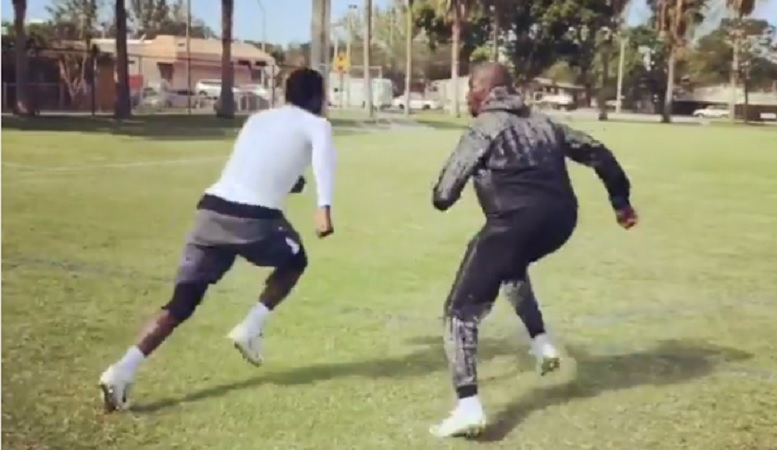 When it comes to self-improvement, Pittsburgh Steelers wide receiver Antonio Brown leaves no stone unturned. Not only is he a famously fanatical and tireless worker at his craft, he is well-known for seeking out peers and challenging himself against them in training during the offseason. He talked about his relationship with Odell Beckham, Jr. during the offseason, for example.

He also talked about the drive and motivation that he felt during Pro Bowl practices this week, working with players such as T.Y. Hilton and Jarvis Landry and the other wide receivers, whom he admitted he knows all want to be where he is right now. He knows every wide receiver in the league is gunning to knock him off his perch as the best in the NFL.

He doesn’t just work out with his contemporaries, however. In fact, former Cincinnati Bengals wide receiver Chad Johnson, or ‘Ochocinco’, is somebody who has worked with Brown for a number of years now. The two even worked together quite recently as the Steelers wide receiver rehabbed from a nasty half injury.

“We have been training together 10 or plus years behind closed doors before social media came about”, Johnson said, calling Brown a “very good friend of mine”. While many might primarily remember Johnson for his personality antics, he was a very good wide receiver in his time, and, outside of his marriage, his light-heartedness also matched a kind heart.

Johnson enjoyed being a spectacle and to be hated by his rivals, especially by fans of the Steelers, but—maybe I’m completely wrong—I think many have grown a certain level of respect for him as a player and a personality, especially after his retirement. The fact that he has been working with Brown for years doesn’t hurt, either.

Playing from 2001 to 2011, Johnson caught 766 passes in the NFL for 11059 yards and 67 touchdowns. While not indicative of somebody deserving to be enshrined in the Hall of Fame, those are excellent career numbers for a wide receiver, and he averaged a healthy 14.4 yards per reception as well.

Johnson is somebody who excelled at the highest level, so he knows what excellence looks like. And he has worked with Brown more than most has, so he has more insight into the way that he works than the vast majority would.

So it means something when he says that Brown is the best wide receiver in the game, and may be the best to ever play by the time his career is over. “He is the only person you can line up, like in the Marvin Harrison era, to leave him on one side and tell him to get open”, he said. “That’s easy. That makes other people’s jobs easier. That is what Antonio Brown is”.