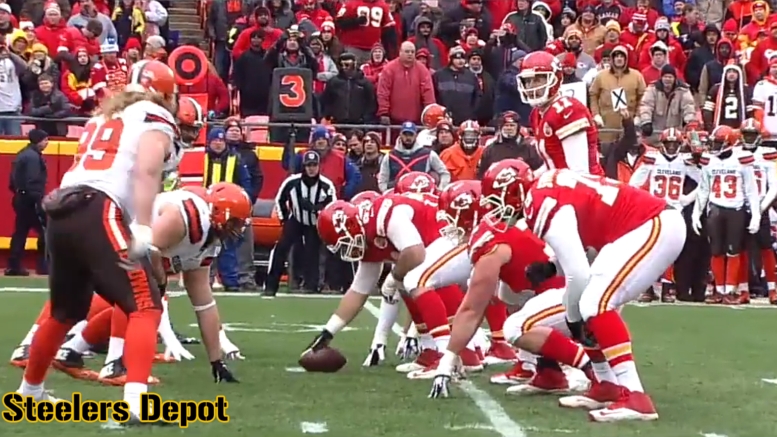 The Cleveland Browns are not thrilled about their current quarterback situation, and are expected to make a significant splash in hoping to address it this offseason. They hold both the first and fourth picks in the first round of the 2018 NFL Draft, and are bound to use one of them on one of any of the top five quarterbacks that they have identified. There has also been talk about adding a veteran, which would not preclude them from drafting a quarterback as well.

Kansas City Chiefs quarterback Alex Smith was not thrilled around his situation, either. Not because he was unhappy with the Chiefs, but because he knew there ws uncertainty regarding his future. Kansas City moved up to draft Patrick Mahomes in the first round of last year’s draft, and they are obviously hoping he is the future.

It turns out the future is now, because Kansas City just dealt Smith to the Washington Redskins, who signed him to a four-year contract extension. And that means the team will be moving away from Kirk Cousins, following two seasons playing under the franchise tag.

Smith could have been a potential target for the Browns, though he would not have cared for it himself. The 13-year veteran was recently on the Dan Patrick Show and was asked about the possibility that he ends up being traded to the Browns, who currently have at quarterback DeShone Kizer, the primary passer during an 0-16 season.

“I haven’t even thought about it”, he conceded with a laugh. “They’ve got nowhere to go but up. 1-31 over the last two years just sounds amazing”. That doesn’t exactly sound like a ringing endorsement. After all, Smith is a bit long in the tooth to be any franchise’s savior.

The Browns reportedly did attempt to trade for him while he was on the trading block, though that should come as no surprise. They already spent much of last offseason first attempting to trade for Jimmy Garoppolo, and then AJ McCarron, successfully working out terms for the latter but then botching the paperwork to negate the trade.

But Smith being off the trading block now, and into a spot that ostensibly had a franchise quarterback, now opens up the inevitability of another big domino to fall. Kirk Cousins. He will be the biggest free agent on the market this year by far, assuming that the New Orleans Saints have no issues completing a new deal with Drew Brees.

The Browns would be an obvious candidate to pursue Cousins, and it would make a lot of sense on their part. They have the cap space, for one thing. They can pay the six-year veteran pretty much anything that he wants.

And that would still not preclude them, necessarily, from drafting somebody as well. With two picks in the first four selections of the draft, it would almost be foolish not to take one of them, between Sam Darnold, Baker Mayfield, Josh Rosen, and Josh Allen, or even Lamar Jackson.

While the Browns have taken a few quarterbacks in the first round, they haven’t come in the top 20 picks since they first returned to the NFL, taking Tim Couch at the top of the 1999 Draft. There really is no reason they should not come away from this offseason without at least a high-first-round quarterback, a big free agent quarterback, or possibly even both. In fact, it’s borderline inexcusable if they don’t.

As a caveat to all this, it has to be pointed out that teams cannot make trades right now, officially, so there is no trade yet. In fact, trades cannot be officially made under March 14, the start of the new league year. So…Smith to Cleveland could still technically happen.