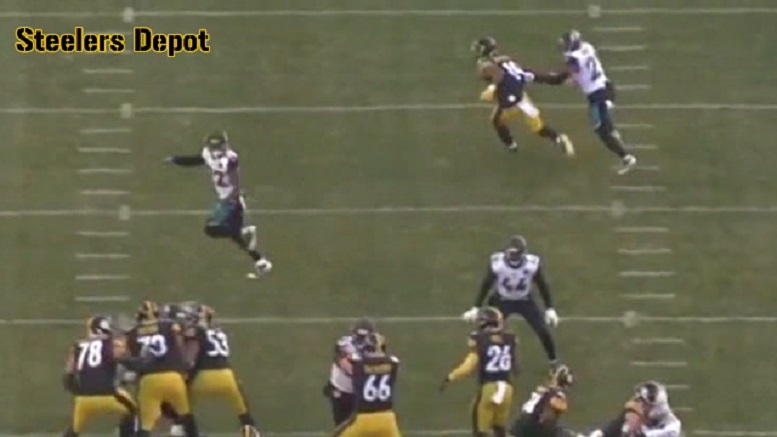 While there’s no sense crying about the two failed fourth down plays the Pittsburgh Steelers ran in their Sunday home playoff loss to the Jacksonville Jaguars, quarterback Ben Roethlisberger still has somewhat of a problem with the second failed one that resulted in an incomplete pass to rookie wide receiver JuJu Smith-Schuster with 12:50 left in the fourth quarter and the Steelers trailing 28-21.

During his Tuesday interview on 93.7 The Fan, Roethlisberger talked about that incompleted fourth down pass to Smith-Schuster and how there probably should of been a penalty called on Jaguars cornerback A.J. Bouye for holding.

“JuJu got a hand on it, it would’ve been a remarkable catch,” Roethlisberger explained. “But you know, I actually asked the official after that play, I said, ‘Did you see that?’ Because from my angle, where I was standing directly behind the play, or in front of the play, I got to see the guy grab his jersey pretty good and I asked the official and he said, ‘You know what, I saw him grab his jersey, but I didn’t think it was enough. And so basically telling me that JuJu’s at fault because he’s a big, strong receiver running through a guy pulling his jersey, which is unfortunate.”

Unfortunate indeed, but as you saw in that replay during the television broadcast of Sunday’s game, Roethlisberger is correct as Bouye certainly did tug on Smith-Schuster’s jersey a little as he was coming out of his break. The end zone view from the all-22 tape shows it even better.

As for the play call, itself, Roethlisberger set that up on Tuesday as well as talking about his progressions on the play.

“I think it was the time I went to the sideline and we talked, and that play was called,” Roethlisberger said. “It was A.B. [Antonio Brown] taking off [deep] and Eli [Rogers] was running a quick, shallow cross. We we’re gonna fake the inside run, hopefully thinking that they were going to bite on that. They covered Eli and then JuJu’s coming into the next window and when I threw it, the defender actually grabbed JuJu’s jersey and gave him a little slingshot, you know pulled him and pulled himself around JuJu.”