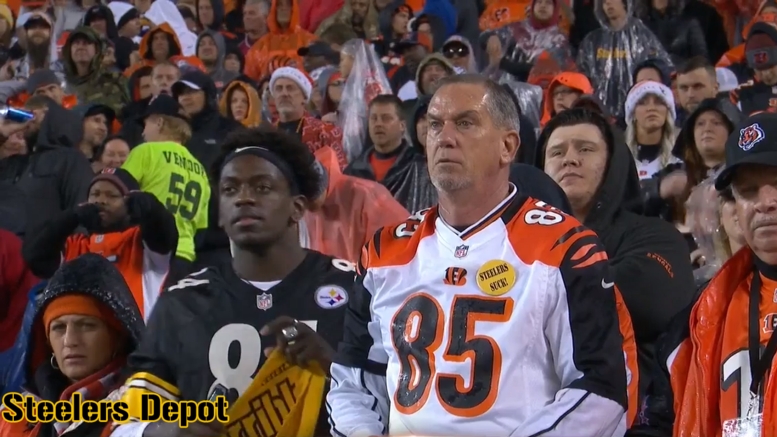 The Bills, who had not reached the postseason since 1999, were vaulted in through the back door this year by virtue of the Bengals defeating the Baltimore Ravens. The game-winning play occurred on fourth and 11 from the 49-yard line with under a minute to play when Dalton found and connected with Boyd, who streaked past a trio of Ravens defenders for the score.

Had the Ravens won, they would have been the fifth seed. Their loss placed the Tennessee Titans into the fifth-seed role while the Bills were granted the sixth seed. The Titans also needed to win their Week 17 game—as did Buffalo—in order to have the chips fall as they did.

While the Bengals gained nothing from the Jaguars’ victory on Sunday, evidently, Cincinnati’s fans were appreciative of the fact that it came at the expense of the Pittsburgh Steelers, their biggest rivals in the AFC North. Of course, the Steelers are everybody’s biggest rival in the AFC North.

According to Mike DiRocco of ESPN, over 100 Bengals fans have since Sunday donated money to the Blake Bortles Foundation, raising in the ballpark of $5000 to date. I must say, I would not mind at all to see it become a trend for fans to donate to players’ charities for whatever reason.

The development was significant enough that it prompted Bortles, who is currently preparing to face the New England Patriots in the AFC Championship game, to release a statement on behalf of his charity.

“Fans are at the core of the football experience and it’s truly exciting and rewarding when they band together, regardless of the team they cheer for, to make a positive impact in the lives of others”, he wrote. “I greatly appreciate the support displayed by Bengals fans and they should know their support will make a difference”.

DiRocco notes that Bortles’ foundation pointed to a Cincinnati sports radio host by the name of Mo Egger as the catalyst for the rash of donations. He evidently suggested that Bengals fans ‘pay it forward’ as Bills fans to for their players’ charities.

It should probably not be surprising that the net gains have been vastly different. Bills fans earned their team’s first playoff berth in this millennium thanks to a shocking 49-yard touchdown, and responded by donating over $300,000. The Bengals’ fans simply got to see the team they most love to hate lose a playoff game. I suppose when you haven’t won a playoff game in decades, that might be worth $5000.