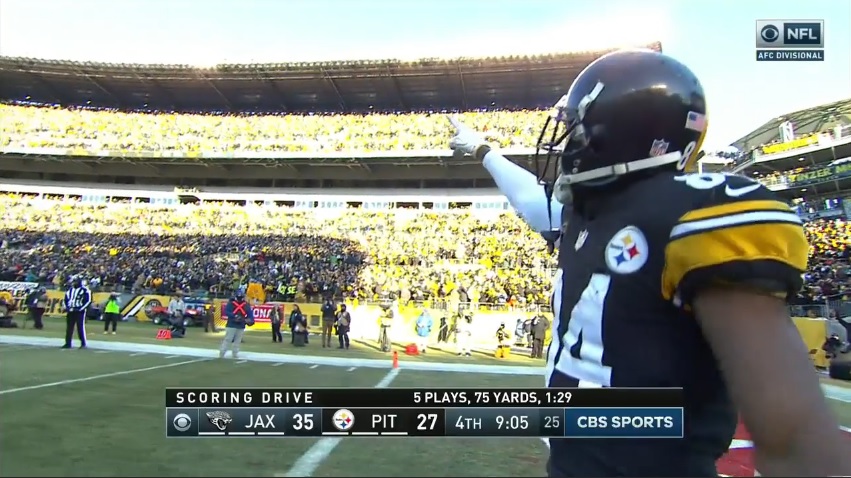 Antonio Brown has already done enough to be a Hall of Famer. We don’t need to be coy about it, don’t need to “wait and see” what happens in another three years. Dude is getting in. First ballot. Count it.

So the last thing for him to really chase is a Super Bowl ring. And yet again, the Pittsburgh Steelers have fallen short of that mark. Brown expressed some of that frustration to reporters following the Steelers’ 45-42 loss to the Jacksonville Jaguars.

“It’s disheartening,” Brown said per the team website. “I thought we had the right group of guys the right team, and the right atmosphere and the right moment. We just fell short again.”

Brown, of course, did anything but. Despite playing on a calf injury that put him at less than 100%, his words, not mine, he put up over 120 yards and two scores, both of which were about a ten on the difficulty scale. He battled the injury, and the flu, and still dominated against an elite pass defense.

But alas, if he wants a ring, he’ll have to wait at least another year.

“We’ve got to remember this feeling and start the process again for 2018.”

He’ll at least have his QB. Ben Roethlisberger confirmed he’ll be back for next season and told Brown “we’ll get there” after the loss. Via Aditi Kinkhabwala.

Ben Roethlisberger puts a hand on Antonio Brown's arm in the #Steelers postgame locker room and says: "Are you OK?" Brown responds quietly and the QB says, "We'll get there. We'll get there."

Brown made the Super Bowl his rookie season, the only time he’s ever been there. Of course, that was long before Brown was AB, and he caught just one pass in the loss to the Green Bay Packers.

If he can’t get back there in the Roethlisberger era, which could come to a close after 2018, there’s no telling when – or if – that’ll happen. He certainly could be waiting quite some time.

“It really hurts. It’s really sad…as a player, you live for these moments. You’re hoping we can do it one day. Just start all over.”

Maybe one day. But not today. What a shame.