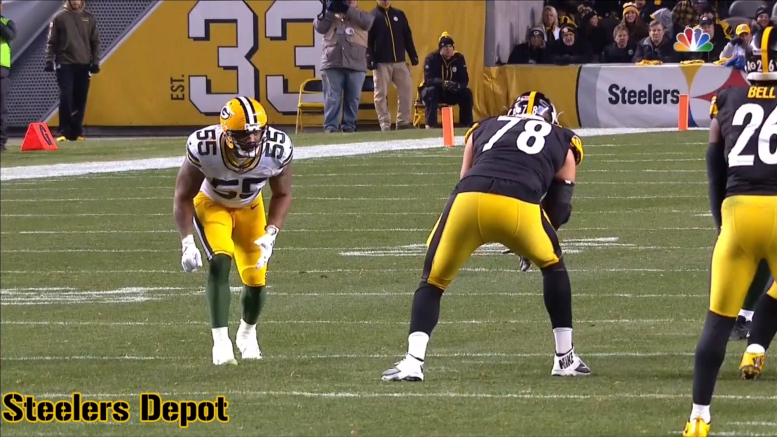 Across the entire offensive line, and maybe even all of the Pittsburgh Steelers’ roster, there may be no harsher critic than Alejandro Villanueva. Not on others but himself, his own tape, his own mistakes. All stemming from the high standards created in the Army. And so even coming off a year where he showed continued growth and played much better at the end than the beginning, Villanueva knows there’s work to be done.

“I obviously had my growing pains as well,” he said via the team website. “Like every player does.”

Villanueva gave up more sacks than any other Steeler, though as he acknowledges, and is fair to point out, part of that has to do with the position he plays.

First of all, we’ve officially reached the stage where Ben Roethlisberger can be considered an immobile (ish) quarterback. That’s a long ways away from Backyard Ben. Second, what Villanueva says is true. Le’Veon Bell is such an asset out of the backfield that the Steelers will frequently use empty sets, or use Bell on a route of the backfield, not giving the line any extra help.

As has become the norm for Villanueva, for better or worse, he’s gotten off to slow starts before picking things up at the end. Through six weeks of 2017, we have him down for giving up 4.5 sacks. Over the next ten, he allowed just 1.5, with one of those coming in the regular season finale.

Now there’s an entire offseason to review the tape and make corrections.

“I never look at the good. I look at the bad. I know this offseason, I have a lot of things to look at. And improve for next season.”

I know he won’t look at the good but there’s plenty there. Few tackles have the length and strength he possesses, and when he wins, it happens in dominant fashion. It’s all about cleaning up the mistakes and becoming more consistent in pass protection though in all honesty, Mike Munchak gets aggressive with Villanueva in his sets, which creates some of the hot and cold to his game. Maybe adjustments there could help, too.