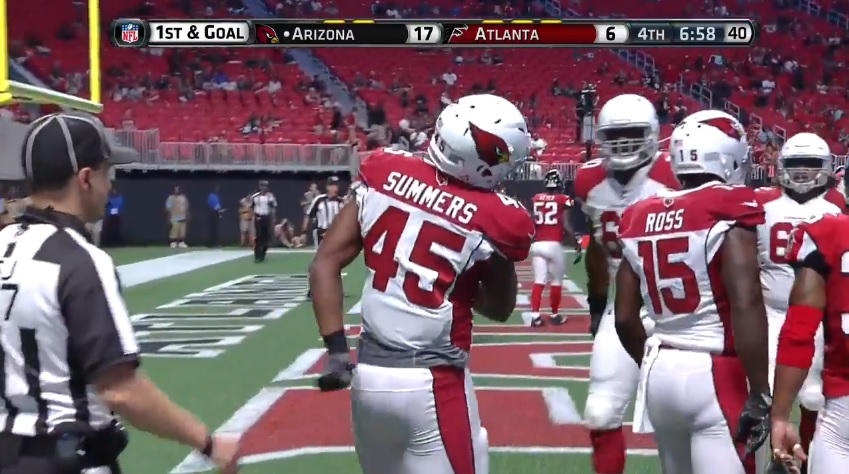 Today, we’ll look at one of the team’s most recent batches of signings with RB James Summers.

If you watched the Pro Bowl, you saw Randy Fichtner’s offense pull off a couple of trick plays. Two flea flickers and an attempted RB pass from Le’Veon Bell. It was the Pro Bowl so sure, the playbook was going to be a bit silly because hey, why not. It’s the Pro Bowl. No one cares about running 22 Double.

Come training camp, if anyone is in charge of running a trick play late in a game, it could very well end up being Summers. Only a few years ago, Summers was lined up in the backfield. As a quarterback. That’s where he played at Page High School in Greensboro, North Carolina.

Summers initially committed to NC State but reportedly flipped to UNC a short time later. It’s hard to find specific details on his recruitment. Either way, it didn’t end up mattering. Summers didn’t qualify academically, sending him to Hargrave Military Academy for what was supposed to be just one semester.

Again, there were apparent roadblocks in the way and things didn’t work out at the Academy, he told Greensboro.com in October of 2015. That sent him down the rabbit hole to Hinds Community College in Raymond, Mississippi. There, he was a dual threat QB. Check out this bullet for a touchdown from 2014.

After two years there, he finally made the move back to Division One college football. Summers came back to North Carolina, close to home, to play for East arolina. As a junior, he didn’t see many carries but frequently found the end zone; eight touchdowns on 96 carries, including a two-score, 169 yard breakout performance in an early season win over Virginia Tech.

He also crept into playing time at quarterback, replacing starter Blake Kemp and leading a come-from-behind win over SMU. When he entered the game, they were down 23-7. He ran for two scores, threw for two more, than put up 42 unanswered in a blowout victory.

The next season, he became the lead guy at running back with 162 carries for the Pirates. He ran for nearly 900 yards and scored seven times. finishing the year strong with a TD in four of the last five games. Summers threw two passes on the year, completing each, one that went for a 31 yard touchdown to beat UConn.

He didn’t run at his Pro Day and the only info I can find is a 33.5 inch vert, 9’11” broad jump, and he put up 11 reps on the bar. After going undrafted, he signed with the Arizona Cardinals. Appearing in three of those games, he carried the ball 30 times for 95 yards (3.1 YPC) and this touchdown, showing speed to the edge.

In addition to all that, he returned a couple kicks and did the usual grunt work of running down kicks.

Despite a decent showing, Summers was released at final cutdowns, signed back to the practice squad, but cut for good nine days later after the team signed Chris Johnson and D.J. Foster following David Johnson’s season-ending injury.

I can’t find any transaction of him being signed elsewhere during the season but like Mike Hilton, he had an end-of-season workout with the Steelers. Obviously, whatever he did left a memorable impression. Though the move was announced by the team, it apparently happened earlier this month, according to this tweet sent out by his agent.

Congrats to @ECUPiratesFB alum @uno_summers1 for signing a one year deal with the Pittsburgh @steelers! #ProPirates #Steelers

Summers will take the place of Terrell Watson as the reserve big-back on the roster. Those players tend to offer up a little more interest than usual in camp because of their size and when it comes to runners, the Steelers like them to come hefty.

The #3 spot will likely be open when the team reports to camp, especially if Stevan Ridley uses his cup of coffee to look for a better opportunity elsewhere. Pittsburgh clearly likes Fitzgerald Toussaint but it’s obvious they’re comfortable with an upgrade there, too. Just as Watson made the team, Summers is going to have to carve out that niche as a short-yard back while possibly showing a little more athleticism in space, out of the backfield, and on special teams (Watson played 147 of them).

It’s always difficult to focus in one on guy and say “he’s going to be the one to make noise” because it’s a needle in a 90 man haystack. But the backstory is interesting and there’s some ability there. A name to keep in the back of your mind.