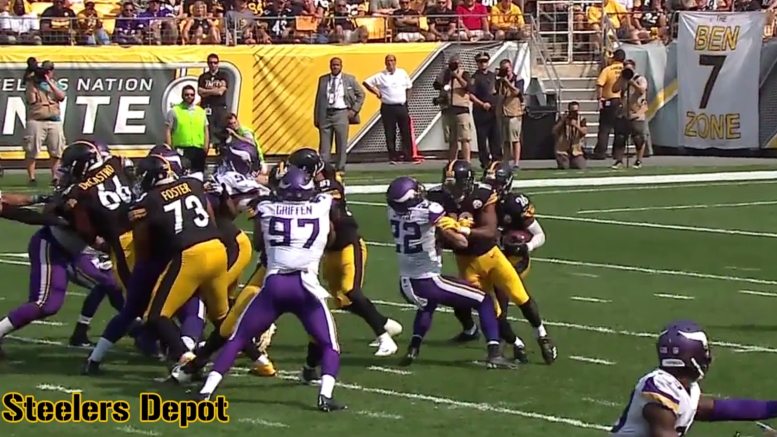 Who would have known at the time that the Steelers’ Week Two victory over the Vikings and their ‘backup’ quarterback, Case Keenum, would end up looking like one of their strongest victories of the season? Minnesota went on to win 13 games and advanced to the NFC Championship game.

Granted, Keenum probably doesn’t belong in the top half of NFL starters, but I imagine it would be fair to say that he played better this season than anybody anticipated that he would. He completed almost 68 percent of his passes while protecting the football and even managed 7.4 yards per attempt.

But his first start was not his prettiest. He completed 20 of 37 passes for just 167 yards with no touchdowns. In fact, the Vikings did not score any touchdowns.

The defense, which has been ragged on for most of the second half of the season, held Minnesota to just nine points on three field goals, while the offense put up 26 points, jumping out to a quick 14-0 lead in the first 17 minutes of the game.

The scoring opened with a 27-yard catch-and-run by Martavis Bryant, who also had a 51-yard reception on a deep pass and also drew a long pass interference call. His 91 receiving yards was a season-high during his up-and-down return.

This was also the game in which we were really introduced to rookie JuJu Smith-Schuster. He authored a crushing block on All-Pro safety Harrison Smith and caught his first pass on a shovel toss from four yards out for a touchdown. He caught three passes for 19 yards in the game, but he was just getting started.

Antonio Brown, in the meantime, was largely held in check by Xavier Rhodes, the Vikings’ All-Pro cornerback. He had just five receptions on 11 targets for 62 yards.

Meanwhile, the Steelers’ cornerbacks largely held Minnesota’s passing game in check, with Stefon Diggs gaining just 27 yards through the air, Adam Thielen with 44. Even Tyler Matakevich got involved, blocking a pass on a fake punt.

The only Vikings player who really excelled on the day was Everson Griffen, another Pro Bowler for their group, who had two sacks. The Steelers’ ground game was still short of full capacity and Le’Veon Bell didn’t have a run longer than 11 yards, but he at least managed 87 on the ground.

This victory was not seen as the accomplishment at the time that it would come to look in hindsight. Sam Bradford was injured in the first game and not many gave Keenum a chance. But he would go on to win 13 games, including one in the postseason, for the Vikings.