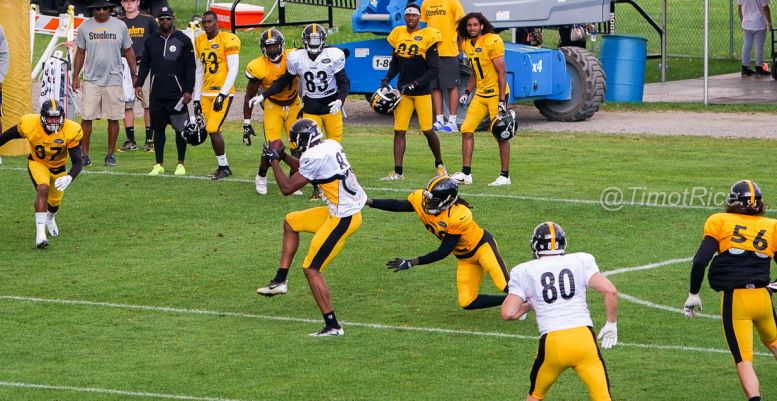 There is a long road between the draft and the start of the season. OTAs. Minicamp. Training camp. The preseason. All important stepping stones in building and honing a 53-man roster. You can’t skip a step and expect to get the results that you want.

Le’Veon Bell learned that a bit as he sat out the entire process, and then he struggled in the early games of the season. Even Head Coach Mike Tomlin went so far as to refer to him as “not a finished product” stemming from his lack of practice and reps.

It’s hard to learn much in OTAs, of course. The most you can learn about most players is what sort of physical fitness that they are in. There is not much installation of concepts. We did get a brief glimmer of Daimion Stafford, who would seemingly end up retiring before training camp, never reporting. That is where T.J. Watt began to prove he was the real deal.

But even he knew it would be when the pads come on that they, and he, would truly start to learn the truth. The thing is, even if he was inexperienced, he never slowed down, nor ever stopped learning. And so he never stopped playing.

Training camp and the preseason had a lot to teach us, though, and things to sort out. Like the depth chart at wide receiver. And cornerback. Eventually, players like Sammie Coates and Ross Cockrell were moved. Vance McDonald and J.J. Wilcox were added.

The late addition, and the biggest addition, was Joe Haden, who was a plug-and-play starter for the team at cornerback. He didn’t even get the play in the preseason or practice much before the season started, but he hardly missed a beat.

Mike Hilton was another player for whom training camp was big. He earned his roster spot with his play in the preseason, for sure, including on special teams, and that made a big difference this year to have him playing in the slot.

It also taught them that they needed help at tight end, because they didn’t have enough, which is why they brought in McDonald. That worked out—when he was healthy. Wilcox, on the other hand, didn’t really help out much at safety, even if he started a game.

In general, the offseason was a successful one, showing them to be a team with both talent and depth, and even health, as well. There was good reason for optimism heading into the year, a year that saw them go 13-3. In no way did it predict an early postseason exit. At least not after the addition of Haden.