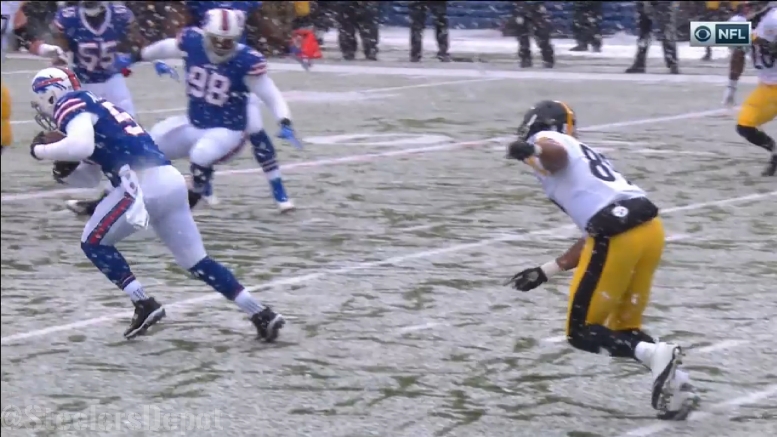 Question: Is anybody even giving the Bills much consideration?

Today’s question isn’t really about the Steelers, as the topic in question would not be able to affect them for a couple more rounds yet. It’s more about the underdog. As we quickly approach the first games of the 2017 postseason, we are again at the period in which teams are dismissed out of hand, not even given a shot to advance. And frankly, those moods are frequently on the nose.

One of those teams seems to be the Buffalo Bills, who will head down to Florida to face the hosting Jacksonville Jaguars, a team that arguably boasts both the best and the most talented secondary in the NFL, particularly their pair of cornerbacks, A.J. Bouye and Jalen Ramsey.

The Steelers learned first-hand just what sort of competitors those two can be during an ill-fated visit to Heinz Field. It was perhaps the worst game of Ben Roethlisberger’s career, or certainly one of the very worst, as he three five interceptions with no touchdowns to match.

The Jaguars have since not continued such a stunning touchdown-to-interception ratio, however. In fact, they are actually heading into the postseason riding a two-game losing streak, having fallen victim to both the 49ers and the Titans. Tennessee, a wildcard playoff team this year, beat the Jaguars in both meetings this year.

Jacksonville, making the postseason for the first time in years, got off to a slow start, ending up with a 3-3 record after six games, and they lost their last two, but in between they were arguably the best, and likely the hottest, team in football, winning seven of eight games as their defense smothered and their offense even came to life.

The Bills? Right now, they’re simply hoping that LeSean McCoy can play in some capacity, as it sounds like, under normal circumstances, he wouldn’t. But a playoff game makes you heal faster. Frankly, they don’t have much else outside of him. He has the most receptions for the second-most receiving yards, and the leader, their tight end, doesn’t even have 600 yards.

The Bills’ strength on defense is their pass coverage, but the Jaguars put their running game first, and Buffalo allowed 22 rushing touchdowns this season at 4.3 yards per carry. It will be hard to imagine them matching without McCoy.