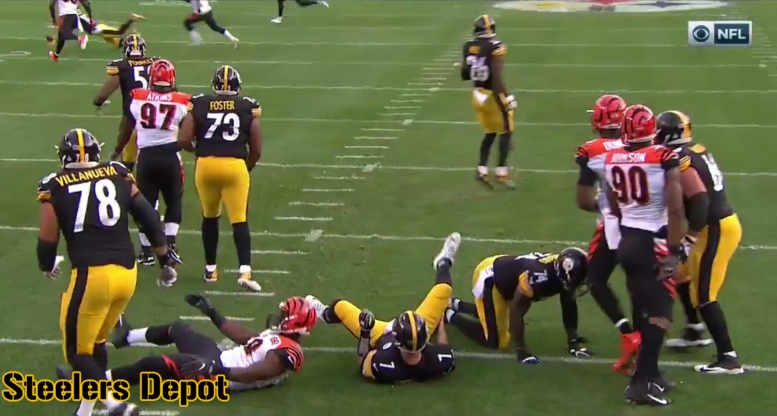 The Pittsburgh Steelers didn’t get any help from their AFC competition yesterday, with the Ravens, Patriots, Jaguars, and Titans all winning, which continues to make their margin for error in their quest to secure homefield advantage throughout the playoffs pretty thin.

But they can afford to lose a game, provided that it’s not to the Patriots. And I think we all know that if they don’t lose today, they’re going to lose next week, because the Steelers just can help but think about the Patriots, which means that they have to lose a game before they play said Patriots. They’re distracted, and these are both trap games against their two biggest rivals.

While those in the locker room are laughing or rolling their eyes over people on the outside painting absurd portraits about their ability to focus on large men smashing up against them because they are wearing the wrong color of uniform, there is a game to be played—a primetime game, even—at the home of a division rival.

There’s no way they can ‘get up’ for this one, and even if they somehow manage to lose, if it is not in convincing fashion, then it is still prime fodder as an example of them playing to their level of competition.

Seriously though, ‘trap games’ are really not much of a thing in the NFL. You have to be a pretty bad coaching staff or a really undisciplined player individually to look past any team in the NFL and just assume that your natural talent, even at say 70 percent capacity, with no real preparation should be more than adequate to stake by.

I would like to say, and to think, that there is nobody who actually believes that the Steelers are looking past the Bengals, against whom they have had some of their most heated games of the decade, just because they know the Patriots are on the horizon. I would like to think that, but I know that I can’t, because I know that it’s not true, and I’ve seen the people saying these things.

The problem with preconceptions is that they’re easy to maintain because of the way that the human mind works. You have a tendency to recall only the pieces of evidence that reinforce the preconception while disregarding or handwaving those that do not. So as long as the Steelers have one-score wins against teams who have two or more wins fewer than they do, we will still have to hear about the mythic ‘trap games’ that almost never actually happen.

And it’s not like the Steelers have that big of a margin of error. At the most, they can afford to go 3-1 in the four games that are not against the Patriots without needing help to retain the top seed. They know they have a lot more games yet to win in order to get where they need to be. Not just one win, two weeks from now. Very likely four of five. There is no looking ahead when you face that reality.