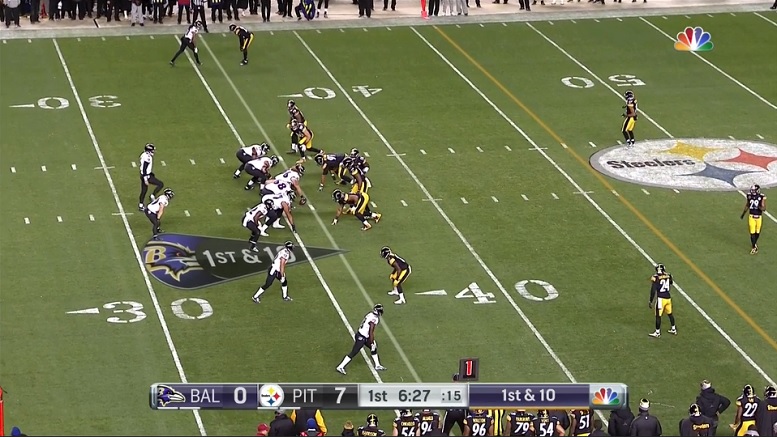 With Pittsburgh Steelers inside linebacker Ryan Shazier lost for the remainder of the season a week ago Monday due to a spine injury that he suffered, the team was forced to use three different players at his position during their Sunday night game against the Baltimore Ravens to replace him. If you watched that game against the Ravens, you know that those three players, Arthur Moats, Sean Spence and L.J. Fort, each struggled individually some at the inside linebacker position that Shazier normally plays.

On Tuesday, Steelers head coach Mike Tomlin admitted that it might take some time for the team to figure out the best way to attempt to replace some of the things Shazier is able to do on the defensive side of the football.

“We acknowledge as we continue to work to find our rhythm in the replacement of Ryan that it’s probably not a one-week thing,” Tomlin said during his Tuesday press conference. “It’s a multiple-week thing in terms of defining that balance in terms of the distribution of the many jobs that he does for us, or did for us, this year. And so, we’ll continue with that.”

So, how did Tomlin think Moats, Spence and Fort all played against the Ravens and does he think there’s room for growth?

“All three had their moments positively and negatively,” Tomlin said when asked that question. “We’re going to assess those moments and work to accentuate the positives individually and collectively, and minimize the negative. It might be a redistribution of snaps, it might be a redefining of roles within that division of labor and not only this week, but in the upcoming weeks.

“It’s just how it goes. We were going through a similar division of labor discussion at the beginning of the year when we were trying to find our rhythm between JuJu [Smith-Schuster] and Martavis [Bryant] and Eli [Rogers]. It happens from time to time and none of it happens probably as quickly as you would like. But the more you play, and particularly if your open to letting it reveal itself to you, it will.”

Tomlin was also asked Tuesday if he would prefer to see one of the three players ultimately step up and replace Shazier.

“Man, I’d love to see one guy, but identify that guy,” Tomlin responded. “You know, Shay [Shazier] is a special guy with a lot of talents. Not only physically, but mentally and from a leadership standpoint, communication. So, it’s just not a realistic discussion to talk about one guy replacing him. Just like it’s not a realistic discussion talking about one guy replacing any of our significant components. If we were playing without Le’Veon Bell, and we’ve played without Le’Veon Bell in the past, it’s multiple guys, for example.”

Tomlin was then asked if it’s a challenge to play three different players instead of one at a position.

“There really isn’t,” Tomlin said. “Not anything substantial other than one. All of these guys have been here, largely, and got a background with us and understand how we are built and how their roles fit in the big picture of things. So, I don’t know that there’s any significant difference in working with multiple guys. None of the guys are new, even Spence isn’t new to us.”

As you can probably imagine, the communication on defense Sunday night against the Ravens was lacking without Shazier being on the field and Tomlin was asked to discuss that topic on Tuesday.

“You know, not as smooth as you would like, but that’s probably a reasonable expectation. We were without our defensive quarterback,” Tomlin explained. “So, it’s also reasonable to expect them to smooth out as we continue.”

The Steelers will host the New England Patriots Sunday at Heinz Field and if their inside linebackers play in that game like they did Sunday night against the Ravens, it’s hard to imagine them beating the AFC stalwart. Being as Tomlin hinted Tuesday that we might see some snap redistribution in the coming weeks at Shazier’s position, perhaps Fort will be given a chance to play more. Against the Ravens, Spence played 34 snaps while Moats played 19. As for Fort, perhaps the most athletic and most capable of the three players, he played just 8 snaps against the Ravens.

Perhaps when he’s healthy again, fellow inside linebacker Tyler Matakevich will be part of the three-headed unit replacing Shazier so that Moats can go back to his normal outside linebacker position.