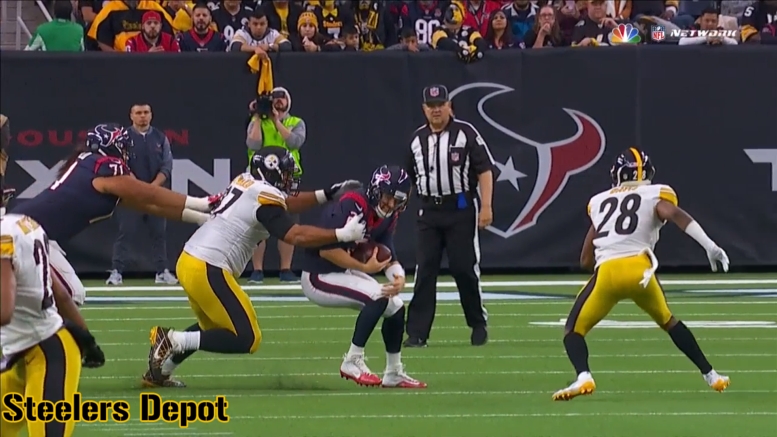 As noted a short time after the Pittsburgh Steelers Monday win over the Houston Texans, the team’s defense now has 50 sacks on the season and thus now has a chance at breaking the franchise’s single-season record in that statistical category. On Tuesday, Steelers head coach Mike Tomlin was asked to talk about what it is exactly that has led to the team’s defense being able to get consistent pressure on opposing quarterbacks this season.

With two sacks against the Texans on Monday, Steelers defensive end Cameron Heyward now has 12 quarterback take-downs entering the team’s regular season finale. While the former first-round draft pick wasn’t voted to the Pro Bowl this year, Tomlin made sure to point out on Tuesday what an injustice that was and why Heyward shouldn’t be classified as a prototypical defensive end that rushes off the edge.

“I can’t say enough about the contributions of Cam Heyward, not only in the game, but all year,” Tomlin said. “Oftentimes he gets misidentified because of our base structure. He’s a 3-4 end, but the reality is that he is an elite interior rusher – no different from Aaron Donald or Geno Atkins. When you look at it from that perspective, the season that he is having is a really special one. He rushes on the interior just like those men and is having a very comparable season to the best in the world in terms of being an interior rush man.”

The Steelers will close out their regular season at home on Sunday against the Cleveland Browns. Back in Week 1 the Steelers defense registered seven sacks against the Browns so it’s easy to speculate that we might see roughly that many quarterback take-downs in this meeting between the two teams.

“I think that if you’re going to be a group that is committed to applying pressure on the quarterback you have to be willing and capable of it coming from any and all areas and that’s something that we really focus on,” Tomlin said.

Well, Mike Tomlin was on to something. Per @NFL's Next Gen Stats @CamHeyward has played 87.1% of his snaps as an INTERIOR lineman. And no one has more sacks while lined up as an interior lineman than him (and Aaron Donald). pic.twitter.com/TR7K1nauwL