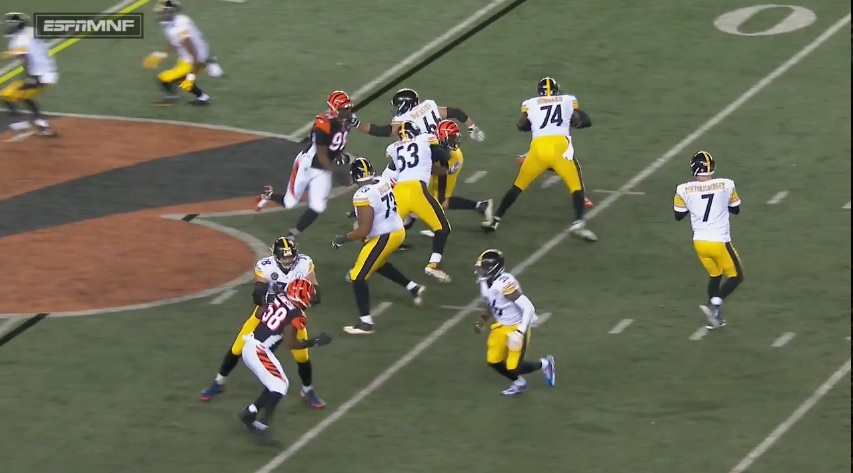 Chris Hubbard isn’t Marcus Gilbert. But he’s doing an awfully good impersonation. Last week, we highlighted how good he was against the Green Bay Packers. And Thursday, Todd Haley hammered home the point. Chatting with Bob Labriola’s in the weekly Coordinator’s Corner, Haley talked up what Hubbard has done over the year.

“He’s been a great story. And he has been since he got here. Just his versatility. But now that he has had to step in and play and play against some of the teams that he has and play at a high level and give us a chance to win, I think it’s really been impressive. A testament to him working and continuing to work even though me might not have been a front line guy.”

Haley said the Bengals win was the biggest challenge Hubbard has had to face so far because of the unique size and length of their ends, namely Carlos Dunlap, who stands in at 6’6, 280 with nearly 35 inch arms. Hubbard is shorter, not that much heavier (and we’re going off Dunlap’s listed weight, which are generally inaccurate) and definitely doesn’t have that kind of length.

An undrafted free agent out of UAB, he’s arguably the most successful active player from that school. Like Ramon Foster, he began his career as a Swiss Army knife, able to play any spot, and this year, has settled into his natural tackle role. Teammates have been effusive in their praise of him being used in difficult roles. Practice time at any one position was inconsistent before he settled to his right tackle spot and when on the bench, Hubbard never knows where he’s going to end up. Could be at right tackle, a tackle-eligible, or maybe even center in an emergency.

Hubbard held his own, even if it didn’t always look pretty. Approaching 600 snaps this season, Hubbard, by our count, has allowed just one sack on the season. That’s fewer than David DeCastro, Ramon Foster, and the same as Maurkice Pouncey.

The road doesn’t get easier Sunday night against the Baltimore Ravens. Terrell Suggs, well into his 30s, is still playing at a high level. He leads the team with 10.5 sacks and will primarily be facing Hubbard in a primetime matchup with everything on the line.

If Hubbard can play like he has been filling in for Gilbert, Ben Roethlisberger will continue to flourish.