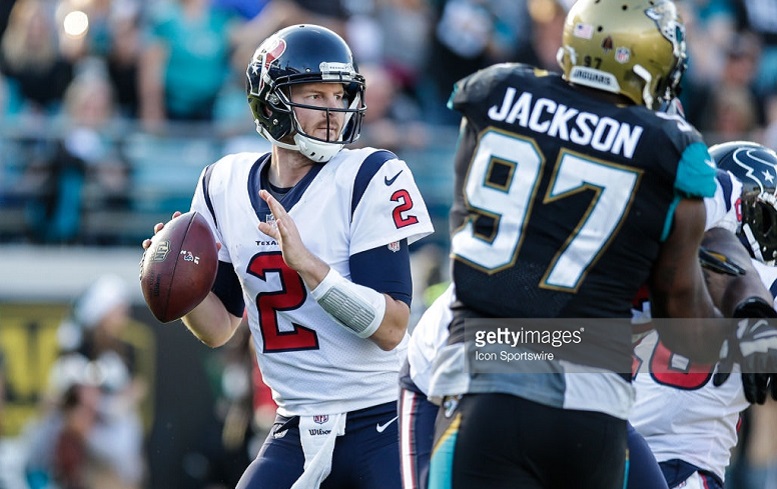 As expected, the Houston Texans will start quarterback T.J. Yates at home against the Pittsburgh Steelers on Monday as regular starter Tom Savage will miss the contest due to a concussion that he suffered a few weeks ago. Texans head coach Bill O’Brien made the announcement that Yates would start against the Steelers on Wednesday during his press conference with the media and he talked briefly about his journeyman signal caller.

“He came in late in the year and he’s done a good job for us,” O’Brien said of Yates, who was signed by the Texans in early November after rookie quarterback Deshaun Watson was lost for the season due to knee injury.”

Yates, who made his first start of the 2017 regular season against the Jacksonville Jaguars this past Sunday, completed just 12 of his 31 total pass attempts in that contest for 128 yards with one touchdown and one interception. He was also sacked four times by the Jaguars defense in the 45-7 loss.

“I know it’s been tough. I think the Jacksonville defense is a great defense and to come in there for your first start, that’s not easy and I know he’ll get better,” O’Brien said of Yates’ first start.

While Sunday may have been Yates first start this season, it was the eighth regular season one of his career which originally started back in 2011 with the Texans after they drafted him in the fifth round of the 2011 NFL Draft out of North Carolina. Yates also started two playoff games for the Texans during his rookie season.

As far his regular season career passing stats, Yates enters Week 16 with a 55.6 completion percentage and 9 touchdown passes and 9 interceptions. He currently owns a 6.5 yard per attempt number and a career quarterback rating of 72.8.

In last year’s AFC Wildcard game between the Steelers and Miami Dolphins, the team Yates was with last season, he played one snap in place of quarterback Matt Moore, who left that contest following a hit to his head and neck area from Pittsburgh outside linebacker Bud Dupree. That was the only time Yates has faced the Steelers during his career.

The only two Texans offensive linemen who remain of the five who started the 2017 regular season are left guard Xavier Su’a-Filo and right tackle Breno Giacomini.

“We have some work cut out for us in terms of looking at the [Texans] quarterback play and maybe the questions that position and the challenges it provides us,” Steelers head coach Mike Tomlin said on Tuesday during his press conference. “They are different men with different skills sets and so we have to be light on our feet. We have to have a strong enough plan to combat the skill set of both guys.

“[T.J.] Yates being a little bit more mobile in some of the things they are capable of doing with him in terms of moving the pocket and moving him. Whether it’s by design for ad lib, makes things a little bit more different for us. They’ve done an awesome job really when you look at the video of keeping you off balance, utilizing what seemingly might be a disadvantage from a circumstance standpoint and making it an advantage.”