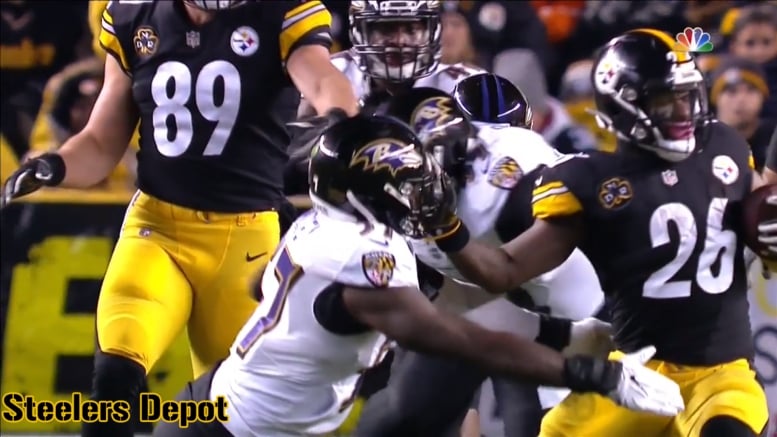 Apparently it wasn’t just me, because it was the Pittsburgh Steelers themselves who clearly indicated during Sunday’s game that they were missing tight end Vance McDonald. The veteran, in his first season with the team, missed the previous three games with an ankle injury, but left in his return with a shoulder injury in the second half.

Up until then, however, the Steelers were making very heavy use not just of him, but of the 12 personnel package. They only really turned to their usual 11 personnel with three wide receivers on the field once the wheels started to fall off in the second half.

In fact, the first six plays of the game were all run out of the 12 personnel package, with McDonald and Jesse James playing in a variety of roles. Each of them lined up as a receiver three times apiece, including twice together on the same play. James caught two passes for 20 yards in that span.

The final two plays of that drive featured three receivers, but then moved back to two tight ends, with the fullback mixed in, as well as the tackle-eligible. The first three plays of the second drive featured McDonald paired with Jerald Hawkins and fullback Roosevelt Nix, with Antonio Brown the only receiver on the field.

Nearly the entirety of the 14-play touchdown drive featured run-heavy personnel, with only one play—a second and 11 that drew a pass interference call and thus was officially not a play—run with three receivers on the field. In fact, the final play of the drive had none of the field, with the rare 23 package making an appearance.

We were already by that point brought into the late stages of the second half, where over the course of their final two possessions in the final seven minutes they ran a total of 16 plays, all out of 11 personnel, with about half of that coming out of the no-huddle look.

Following the absence of a time crunch, the Steelers went back to the two-tight-end look to open the third quarter, with six of their first seven plays run out of 12 or 22 looks, but it was on the fifth play—coincidentally the one out of 11 personnel—that McDonald would play his last snap.

It would appear that he suffered the shoulder injury on a play a few snaps prior to that, a nine-yard reception on second and eight, on which he shoulder-charged inside linebacker C.J. Mosley on the run fighting for extra yardage.

Considering that McDonald did not practice yesterday with his shoulder injury, I would not be particularly optimistic about his chances of playing on Sunday, and based on how they appeared to be using him—playing 36 of the first 45 snaps, more than James—the Steelers will miss him, as they have for much of the past two months.