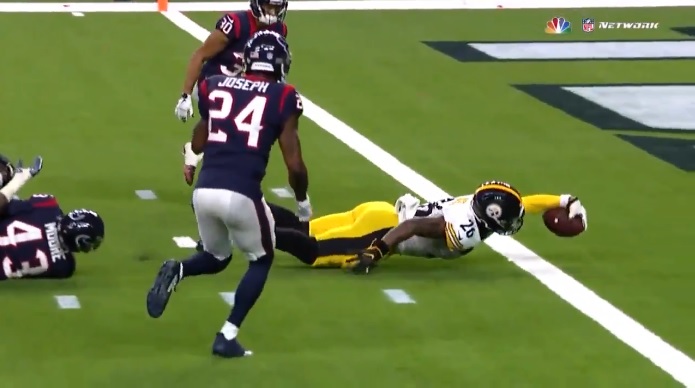 A very Merry Christmas to Steelers’ Nation. Your gift? A blowout victory.

Mike Hilton: You gotta start with Mighty Mike. Three sacks in a game, becoming the first Steeler DB to do it since Troy Polamalu in 2005. Texans had no account for him in their protection schemes and Keith Butler sent creative blitzes to overload both sides. Sack total jumps from one to four sacks just like that.

Justin Hunter: I have long been a critic of Hunter, the one naysayer in camp when everyone else drooled over him. And for basically the entire year, Hunter has been super quiet. But to his credit, he stepped up today with his first touchdown as a Steeler. Nice job to retrace his steps and work back to the ball, securing the throw and boxing the CB out. Well done. Team effort to fill in for Antonio Brown.

Roosevelt Nix: Rooooooosie. The Steelers have said they have a red zone package for him and they showed it today. FB dive and 45 did the rest, his second TD of the season. It was just one play but that was a really fun moment.

David DeCastro/Maurkice Pouncey: I thought the whole offensive line did an excellent job today. But gotta hand it to the good ‘ol Duke boys in the middle. I don’t know how Pouncey gets dinged so much by grading metrics. But DeCastro has been highly rated all year long and with good reason. Two of the most athletic guys on the line anywhere in the league. DeCastro had a pancake on Nix’s TD, Pouncey working to the LB on Bell’s.

Cam Heyward: Two more sacks, a forced fumble. Just another day at the office. Give Heyward 12 sacks on the season. And still no Pro Bowl vote. What a joke.

Vance McDonald: There may have been another nick in there, which is frustrating given his long range of injuries, but McDonald was productive. Especially early, earning look after look from Ben Roethlisberger.

Martavis Bryant: No, I didn’t forget about Bryant. This was the game he needed to have. Showed attention to detail making sideline catches and played to his size, running over a pair of Texans on a 3rd and 12 conversion. Well-rounded, impressive game from him. Nothing bad to say.

Run defense: Not good enough. Especially knowing the Texans couldn’t throw the ball a lick. Too many big lanes in the second level, poor job forcing the ball inside, and communication, or lack thereof, caused a lot of problems. Combined, Houston ran for 176 yards and well over six yards per carry. This is a run game that was not scary. Shouldn’t have happened.

And while not related to run defense, some bad QB play (and coaching) bailed the Steelers out.