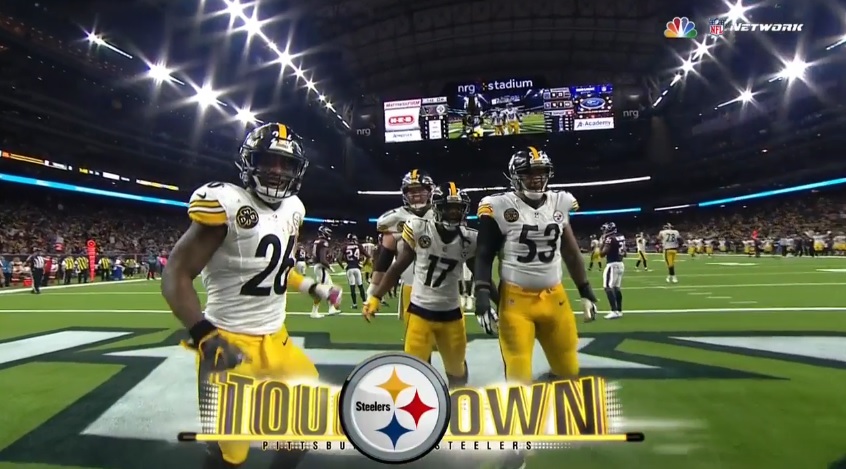 What a wonderful Christmas present that was, provided by the Pittsburgh Steelers.

A dominating 34-6 win over the Houston Texans at NRG Stadium was just what the doctor ordered for the black and gold coming off of a heartbreaking loss to the New England Patriots one week ago.

Thanks to the win over the Texans, and a Jacksonville loss to the 2019 Super Bowl Champion 49ers, the Steelers locked up at least the No. 2 seed heading into the final week of the regular season.

Overall, the Steelers controlled almost every facet of the game against the Texans, picking apart a strong secondary, controlling the ball throughout and really putting the clamps on a Houston passing attack that had been very good in recent weeks.

Let’s take a look at how the Steelers’ positional groups performed, at least from my view.

Ben Roethlisberger continues his strong run of great games in the second half of the season. While he wasn’t as needed on Christmas Day as in games past, Roethlisberger completed 20-of-29 throws for 226 yards and 2 touchdowns.

His first touchdown was a great scramble drill, allowing Justin Hunter to work open in the back corner of the end zone for a sliding catch, recording just his fourth catch of the year and first touchdown as a Steeler.

It was a great throw by Roethlisberger, throwing Hunter open against Houston cornerback Kevin Johnson, placing the ball where only Hunter could get it. Roethlisberger also dialed up the deep ball well on Christmas Day, finding Martavis Bryant down the right sideline early in the game for a 36-yard toe-dragging catch before then finding Juju Smith-Schuster deep down the left sideline in the second half for a 49-yarder.

It was tough sledding early on for the Steelers’ ground game, but throughout the game the Steelers really took it to the Texans as Le’Veon Bell rolled up 69 yards and 1 touchdown on 14 carries, while newly-signed backup Stevan Ridley added 28 yards on 9 carries in the blowout win.

Bell was his usual patient self, waiting for holes to open up before bursting through for big gains. He continues to dish out punishment at the end of his runs too, which is encouraging. He’s not taking hits, he’s handing them out. That’s what I love in a running back.

As a receiver, Bell had a light workload, hauling in just five passes for 28 yards. What was nice about his game on Christmas Day was that he was very productive despite a light workload. The coaching staff did a good job of working Ridley in.

In his first game as a Steeler, Ridley ran hard and decisive, providing a change of pace to the Steelers’ ground game behind Bell. His longest run on the day was just 7 yards, but it’s clear he brings a physical element to the backfield.

Fullback Rosie Nix is starting to get used to the end zone! Nix plunged in from 1-yard out for his second touchdown of the season – his first on the ground – stretching the Steelers’ lead to 17-0 in the second quarter.

This unit did a really nice job once again without the services of Antonio Brown.

Smith-Schuster led the way with 6 catches for 75 yards and a touchdown, continuously making tough catches in traffic, but his best play of the game was his wide-open touchdown in the second half, where he cooked the Texans’ safety to find himself wide open in the middle of the field for the easy touchdown. Route running is an underrated part of Smith-Schuster’s game, and it was on full display on that route.

Bryant hauled in just 3 passes on the day, but he was tough to cover throughout the game for Houston, finishing with 60 yards on the day. I already mentioned the 39-yarder down the right sideline, but his best play of the day was the stop route he caught on third down and fought through tackles for the first. That’s the first time we’ve seen that from Bryant this season, and it couldn’t have come at a better time. He’s starting to turn it on.

Eli Rogers hauled in just 1 pass on the day for 6 yards, while Hunter had just the 1 catch that went for a touchdown.

Just one quarterback hit on the day, no sacks and 104 team rushing yards and 2 touchdowns on the ground made for a great day from the Steelers’ offensive line.

Yes, Maurkice Pouncey was called for a holding penalty, but he was terrific as a run blocker. If you get a chance, check out him working to the second level on Bell’s touchdown, sealing off the linebacker to spring Bell into the end zone.

Alejandro Villanueva had a great day against Jadaveon Clowney, burying him into the turf once while also walling him off from the edge in pass protection. He was physical when he needed to be and showed off his athleticism on the edge against Clowney’s speed rushes.

BJ Finney did a nice job of filling in for Ramon Foster, who missed the game while still in concussion protocol. Marcus Gilbert looked really good in his return from suspension, looking at times like he never missed four games.

David DeCastro was his usual great self, pulling left and right in front of Bell for big gains while standing tall in pass protection.

Another week, another big rushing game for the Steelers’ opposition. That’s starting to get very concerning.

If I were grading Cam Heyward strictly by himself, he’d get an A+. Two sacks a forced fumble, four tackles, two tackles for loss and three quarterback hits on the day. He was incredible and couldn’t be blocked by just one man. It’s still amazing to me he didn’t get a Pro Bowl nod.

Stephon Tuitt and Javon Hargrave were quiet on Christmas Day against the run, but Tuitt did record a sack in the win. Tyson Alualu added two stops in sub packages.

While I do think a lot of the run game issues fall on the linebackers, the defensive line is allowed to penetrate and find the football under Keith Butler, and they’re just not consistently doing it against the run.

As I mentioned earlier, the Steelers struggled against the run game, and a lot of that falls on the linebackers, namely Sean Spence, LJ Fort and Vince Williams.

Despite combining for 16 stops in the win, Spence and Williams struggled to get off blocks at times and fill gaps against the run, leading to big runs from Houston.

Spence did record a sack in the win, but he looked slow in space at times and was a step slow to slide over into gaps.

On the edge, Bud Dupree and TJ Watt didn’t provide much of a pass rush, but both were strong against the run, recording a combined 8 tackles and one tackle for loss in the win. Fortunately for Watt, he avoided a major knee injury late in the game.

Look, I know the combination of TJ Yates and Taylor Heinicke is nothing to write home about, but the Steelers held the Texans to just 51 net passing yards (93 total passing yards) in the win. They were spectacular against the pass, especially Joe Haden, who had his best game as a Steeler.

Haden trailed DeAndre Hopkins all over the field, holding him catchless until midway through the third quarter. Yes, Hopkins caught a spectacular touchdown over Haden, but that’s one you just chalk up to a great player making a great play (even if Hopkins commited OPI on the play).

Artie Burns handled his (sort of) demotion well, responding in a big way on Christmas Day, picking off Yates in the back of the end zone to hold the Texans off the board, while also chipping in with two tackles and a pass deflection.

The real story from the secondary though is do-everything slot corner Mike Hilton and his three sacks, tying a franchise record for defensive backs. He’s got to be the best blitzing cornerback the Steelers have ever had. I don’t think it’s close.

Mike Mitchell and Sean Davis combined for 8 tackles in the win. It was a quiet day for the safety tandem, but perhaps the play the sticks out the most is Mitchell’s poor angle on Alfred Blue on Blue’s 48-yard run down the right sideline in the second quarter.

Chris Boswell continued his strong December run since becoming a Steeler, drilling both of his field goal attempts right down the middle, while Jordan Berry boomed his three punts in the dome, averaging 47.7 yards per punt in the win.

Rogers was great as a punt returner, averaging 16.4 yards per return on five tries, including a long of 27 that put the ball near midfield.

Coverage units were strong as well, holding Jordan Todman at bay, while shutting down Braxton Miller on punt returns.