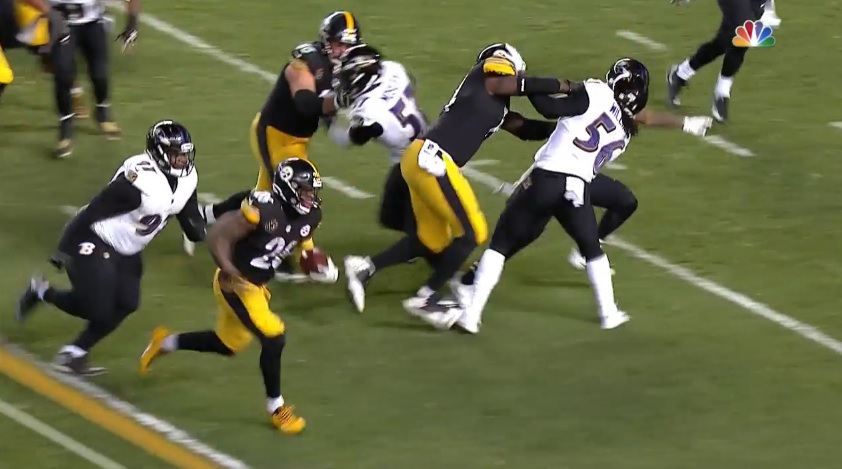 Wild win. Baltimore, Pittsburgh. Ravens, Steelers. It doesn’t get a lot better than that.

Especially when you win.

Antonio Brown: I don’t think it needs to be said or written anymore. He just shows up each week. Literally, I’ve run out of things to write about him. No one creates space at the top of the route like him, no one has the catch radius he has, few are as good after the catch as him.

Give him the Gold Jacket right now.

Le’Veon Bell: Bell didn’t have gaudy numbers in the run game, partially because the Steelers just didn’t run it much. But Bell showed his power, played through a knee injury, and was a constant source of checkdown relief for Ben Roethlisberger. Three total touchdowns. Excellent.

Ben Roethlisberger: Big Ben may have been a hair shy of perfect but he was as good as ever in the clutch. Those deep balls to AB were gorgeous and Roethlisberger spread the love around. He finished with career highs in completions and attempts. Playing out of his mind.

Chris Boswell: Get all the Killer B’s in there. Boswell was tremendous as always, highlighted by the go-ahead 46 yarder. Another came from 52, giving him a pair from 50+ yards this season. And his kickoffs were great.

Jesse James: We’ve given James a hard time this year. But man, he had the game of his life. 10 receptions, 97 yards, each career highs by longshots. And some clutch catches over the middle, none bigger than what he did on third down early on the Steelers’ final drive. Put it simply – he was great. I bet Heath Miller is beaming.

Jordan Berry: Gotta give some love to the other specialist, too. Wasn’t as sexy as Boswell but he averaged 47 yards per punt and his directional kicking was excellent. Only one return, which went for zero yards. Kudos.

Roosevelt Nix: ROSIE! I love me some Rosie and tonight, he made the biggest play of his NFL career. His first catch of the season and first career touchdown, a grown man’s play to wrestle the ball away in the end zone. He kicked things off with a special teams tackle and I saw him pancake a dude on a kick return. He’s the man.

Chris Hubbard: Terrell Suggs did pick up a sack but I don’t know if all the the blame will come on Hubbard for it. Hubbard otherwise was excellent and his drive block on Tim Williams on Bell’s rushing TD was a thing of beauty. Hubbard continues to step up and honestly, make most of Steelers’ Nation forget about Marcus Gilbert.

I thought the whole line did a really good job to give Ben time. But Hubbard deserves extra praise for the difficult matchup and his Grade A performance.

T.J. Watt: No, the Steelers’ pass rush wasn’t as pretty as it could’ve/should’ve been. But Watt was consistently the guy closest to Joe Flacco and made the defensive play of the game in an outing where few of those existed. His effort and chase to the ball was on display, coming from across the field to run Flacco down and knock the ball out, ending the game.

Sean Davis: Yeah, we’re going to see a lot of the defense on here. Davis started things off with a boon, picking off Flacco on the opening possession. It was all downhill from there. Penalties, missed tackles, poor coverage, it was literally a game sponsored by Murphy’s Law. The Ravens’ first TD was squarely on his shoulders.

That tackle, by the way, came with 37 seconds left in the game on a 14 yard completion to Mike Wallace.

Dupree has to be better. He was invisible tonight.

Tackling: I specified Davis for the penalties and coverage but tackling was bad across the board tonight. Didn’t matter if you were Davis, Mike Mitchell, Sean Spence, whoever. Josh Carney’s missed tackles report is going to be…lengthy, to say the least. I don’t know where to begin with this mess.

Really, you can lump a large chunk of the front seven on this list. Spence, Arthur Moats, probably some on Vince Williams too. Alex Collins had his way with the Steelers.