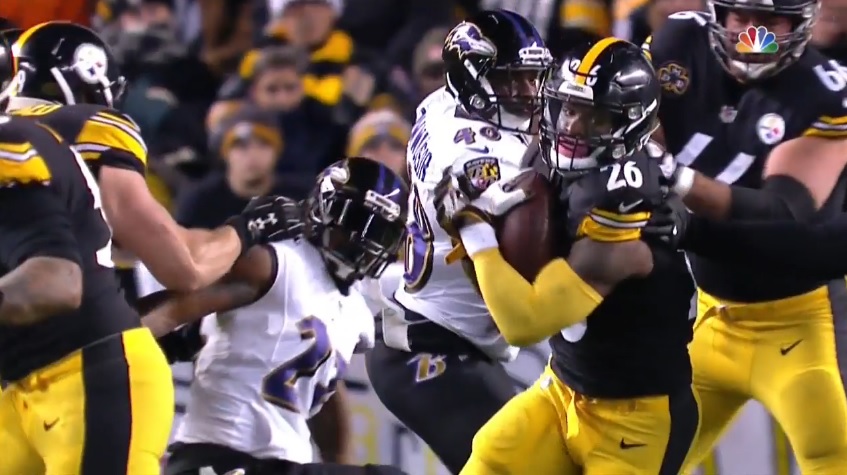 Another December showdown at Heinz Field in primetime, another thrilling Pittsburgh Steelers win over the rival Baltimore Ravens on Sunday Night Football.

It certainly wasn’t pretty, and at times it was in doubt, but a win is a win, and the Steelers are once against AFC North champions.

Thanks to a record-setting performance from star quarterback Ben Roethlisberger, an other-worldly performance from Antonio Brown and three total touchdowns from Le’Veon Bell, the Steelers were able to squeeze past the Ravens on a late Chris Boswell field goal for the fourth time in five games, setting up a pivotal Week 15 matchup with the New England Patriots at Heinz Field.

For the third time in his career, Roethlisberger cracked the 500-yard passing mark in a game, setting an NFL record in the process. It couldn’t have come at a better time, considering the Steelers’ defense had trouble stopping the Ravens’ attack, and the Steelers found themselves in an 11-point hole to start the fourth quarter.

Once again, Roethlisberger was dynamite in primetime at home, carving up the Ravens’ secondary for 506 yards and two scores on 44-of-66 passing. I’m sure his right arm is tired today, but what a performance by No. 7.

He was sharp all game long, spread the ball around to all his receivers and really commanded the pocket down the stretch, keeping everyone on the offense calm and focused.

Bell averaged just 3.7 yards per carry against a stout Baltimore front 7, which is way down from his performance in Week 4 on the road, but Bell ran hard and determined, dishing out punishment yet again on helpless defenders.

Despite finishing with just 48 rushing yards on 13 carries, Bell found the end zone twice on the ground, providing balance to the offense. Where he really excelled ]on Sunday night for the second straight week was in the passing game, hauling in nine passes for 77 yards and a touchdown.

He lined up everywhere on the night and really caused the Baltimore defense problems with personnel. Bell was dinged up in the game, leaving briefly with a knee injury, but he came back and seemed to be okay. It’s worth monitoring on the injury report this week though.

Aside from Bell, James Conner came in and gave the Steelers some solid snaps, carrying the ball twice for just six yards, but he was an adequate pass blocker in limited reps and seems to be gaining the trust of the coaching staff down the stretch.

Fullback Rosie Nix had one heck of a night for the black and gold. Aside from setting the tone on the opening kickoff with a monstrous hit on Chris Moore, Nix helped open holes for Bell and Conner while also providing an edge to the offense, getting into a few scraps with the Ravens.

But let’s not forget his biggest play of the night – a 1-yard touchdown catch over Tony Jefferson for his first career score that pulled the Steelers to within two points early in the fourth quarter. Not a bad way to score your first touchdown.

What more can be said about Brown at this point? He’s the best receiver in the league, bar none. It doesn’t matter if the opposing team is going to drop bracket coverage on him, because he’s going to routinely beat it.

He did that repeatedly on Sunday night, finishing with a game-high 11 receptions for 213 yards, including 136 yards in the furious rally that was the fourth-quarter comeback.

The Ravens and their fans are going to have nightmares of 84 when they think of pivotal Ravens-Steelers matchups at Heinz Field, because he’s come up clutch in every one of them, from the helmet catch down the right sideline, to the Immaculate Stretch to last night’s fourth quarter performance. Am I missing any others against the Ravens in big games?

Along with Brown, Martavis Bryant was decent as a receiver, finishing with six receptions for 33 yards on 10 targets, but he pulled up on a deep shot in the second half, resulting in the Steelers pulling him for Justin Hunter after Roethlisberger was very demonstrative towards Bryant. More on him later.

In place of JuJu Smith-Schuster, Eli Rogers had a couple of nice catches in the middle of the field, finishing with three for 33 on six targets. The Steelers really missed JuJu’s physicality though at times, but credit to Rogers, who stepped up when he needed to and made some big catches.

What a night for the Outlaw, Jesse James!

A career-high 10 receptions for 97 yards, including a couple of huge third-down catches in the rally, made James one of the stars of the night for the black and gold. Right away it was clear that Roethlisberger felt comfortable working with James over the middle, considering he was wide open a number of times against the Ravens defense.

As a blocker, James continues to leave much to be desired, but he more than made up for it with his receiving output in a big spot.

Vance McDonald made his return – briefly – for the Steelers and hauled in four receptions for 52 yards while also serving as a strong run blocker, but the oft injured tight end exited this game with a shoulder injury and never returned.

Roethlisberger was sacked three times in the win and was hit an additional eight times, which has come to be expected in a Steelers-Ravens matchup, but those stats are kind of misleading because I felt that the offensive line did a great job in pass protection, especially Chris Hubbard.

Enjoy him now Steelers fans, because he’s signing else where in free agency for big bucks. He’s more than earned it.

Hubbard was a monster on the night, completely shutting off the pass rush on the right side while finding his footing as a run blocker, burying rookie Tim Williams on Bell’s second rushing touchdown of the night. That block is one that will play over and over again on highlight reels.

As far as the rest of the offensive line goes, there wasn’t much that stood out, good or bad. As a unit, they struggled to consistently run the ball (3.7 ypc), but two touchdowns on the ground is two touchdowns.

Keep an eye on Alejandro Villanueva’s shoulder injury, which caused him to leave for a few snaps before coming back in. He’s been wearing a brace on that arm since the start of the season. We’ll see if it got worse.

Not so good this week from the Steelers’ defensive line.

The Ravens rushed for 5.8 yards per carry on the night, and the Steelers’ defensive line rarely won one-on-one matchups against a depleted Baltimore offensive line. In fact, not one Steeler defensive lineman recorded a tackle for loss in this one.

Stephon Tuitt did record two quarterback hits, including one big one late, while Cam Heyward and Tuitt each batted down a pass, but it just wasn’t a night to write home about for this unit.

Javon Hargrave recorded four of the six total tackles of the trio, but he was pushed around at times, which was a bit concerning.

You have to love Arthur Moats the guy, but he was a step slow last night and struggled to tackle Alex Collins on a few key plays. Credit him for stepping into a position he hadn’t played in four years, but it didn’t go so well.

Vince Williams played with his hair (or lack thereof) on fire at times, finishing with seven stops, good for second on the team, but even he was a step slow reacting at times.

Sean Spence clearly looked like a guy just brought in off the street, while LJ Fort made a few nice plays down the stretch, on both special teams and defense.

At outside linebacker, Bud Dupree continues to be maddening. He goes far too long on stretches of invisibility, and that was the case the entire game against the Ravens, finishing with just one tackle while rarely getting much of anything going as a pass rusher.

TJ Watt came on strong late in the game, picking up his sixth sack of the season, forcing a fumble on Joe Flacco that went out of bounds to end the game. Along with the sack, Watt finished with four tackles, one tackle for loss and a team-high three quarterback hits.

Yes, I know that most of the pass interference calls against the Steelers on Sunday night were garbage, but they happened. That’s not what this grade is for.

The Steelers’ secondary continues to be a problem for a defense that has gradually declined, in terms of stats down the stretch.

The defense gave up five splash-play receptions in the win, allowing Flacco to throw for 269 yards and two scores. On top of that, Collins ran all over the Steelers, forcing a ton of missed tackles that both Mike Mitchell and Sean Davis would like to forget.

On Moore’s touchdown in the first half, both Cam Sutton and Davis were picked on by a great throw from Flacco into the turkey hole, but Davis was way late reacting, almost as if he never saw Moore breaking open.

Joe Haden might come back next week, but I’m not sure even he can plug the holes in the dam right now in this secondary.

Boswell and Jordan Berry were really, really solid against the Ravens. Boswell drilled all four field goal attempts, including the game-winner for the second-straight week, while Berry really stood out punting the ball, averaging 47 yards a punt on three tries.

He really flipped the field at times, despite not dropping a punt inside the Baltimore 20-yard line.

Rogers didn’t do much of anything on punt returns, actually losing two yards on his lone return attempt, while Bryant was an abject disaster on kick returns. He averaged just 11 yards per kick return on five tries. That’s almost unheard of!

I’m all for giving him another shot, but he has to be much smarter with where he’s fielding the ball and how he attacks the kick coverage unit.