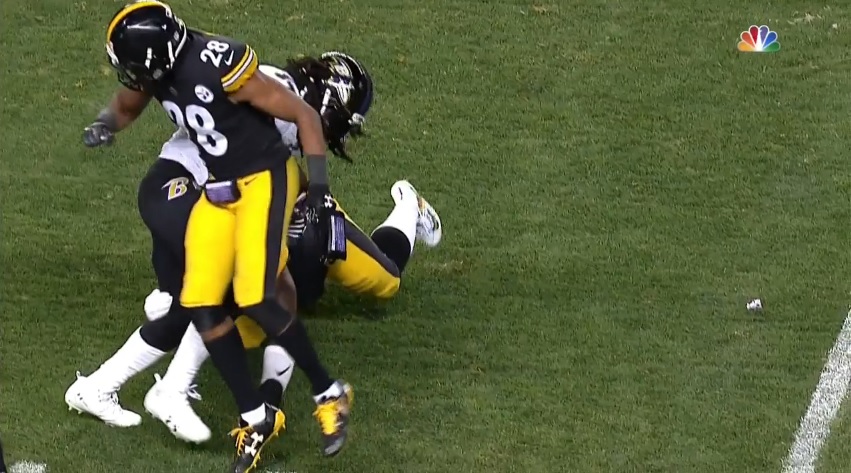 In a second straight rivalry matchup Sunday night at Heinz Field, the Pittsburgh Steelers’ defense looked very porous and lackadaisical in the tackling department, at least when watching live.

However, on the way back through the film for a third time, the tackling display wasn’t even one of the three worst performances by the black and gold during the 2017 season, at least from what I have tracked.

Following the tracking of missed tackles from Sunday’s game against the Baltimore Ravens, the tackling display by the Steelers fell behind the likes of the Chicago Bears game in Week 3, the Indianapolis Colts game in Week 10 and the Tennessee Titans game in Week 11.

Fourteen total missed tackles against the Ravens in primetime is certainly nothing to scoff at, but it wasn’t nearly as bad as some performances this season. And based on the way Twitter was reacting during the game, you’d have though the Steelers would have finished with somewhere around 50 missed tackles.

Yes, 14 is an egregious number, but fortunately for the Steelers and their defense, the 14 missed tackles didn’t result in a loss this late in the season. Of course, they need to improve in this area moving forward if they want to win a Super Bowl. Will they? Only time will tell.

Looking at the list, Sean Spence looked like a guy who had been out of the league a week ago, while Sean Davis was dreadful across the board following a tremendous start to the game. I love his skillset and the ceiling he has as a player, but he’s maddeningly inconsistent in the back half.

Arthur Moats did a decent job stepping in at middle linebacker, but it’s clear he’s not comfortable there, while Coty Sensabaugh continues to regress quickly at cornerback. Might be time for him to his spot behind Joe Haden once the veteran returns from injury.

Lets look at some of the worst misses from the game.

On this short little dump-off from Joe Flacco to Alex Collins in the right flat, the missed tackles start quickly for the Steelers.

Sensabaugh takes a poor route to Collins and is off-balance as he misses. Spence, playing just his fourth snap of the game, misses Collins as well after flying over from his inside linebacker position.

Plays like this has given the Steelers serious issues all season long, especially when Haden and Ryan Shazier were on the field. I don’t know what the issue is with tackling on these short swing passes, but expect a heavy dose of it on Sunday with the Patriots.

I hate to pick on Spence here again, but this was an ugly, ugly missed tackle by an NFL-caliber linebacker. I get that he was out of the league for a bit, but this is a tackle he has to make in the hole.

He scraps over and is in good position to make the stop, but his lower half sticks in the ground, causing him to lunge for Collins, who cuts back slightly in the hole.

Fortunately, LT Walton is there to clean up Spence’s missed tackle, keeping Collins from busting a big run early in the second quarter.

Moats and Davis are right there to swallow up Collins on another short swing pass, yet Davis’ effort is putrid on this play. Throwing a shoulder into a power back like Collins? Come on.

As for Moats, he tries to hang on for dear life near the sideline, but Collins is able to slip through.

Once Collins gets past Moats and Davis, it’s Vince Williams’ turn to miss a tackle along the boundary. It’s hard for me to fault him here though because it looks like he slows up as Davis and Moats converge. As Collins slips through, Williams is a step late to get back up to speed, causing him to whiff along the sideline.

Overall, it was an ugly tackling performance by the black and gold, but thanks to the offense and a couple of key second-half stops defensively, the Steelers were able to emerge victorious.