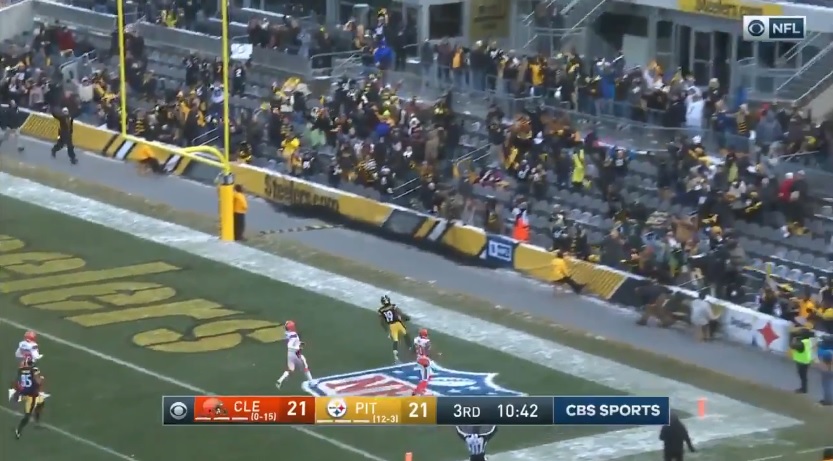 You won’t find any wins in Cleveland but you’ll get some right here. Here we go.

Pass Rush: Anytime you set a season sack record, you gotta start there and tip your cap. The Steelers sacked Deshone Kizer six times on the day, setting a new team record. Tyson Alualu led the team with two. There needed to be better contain and Kizer was too often able to leave the pocket but hey, six sacks are six sacks.

JuJu Smith-Schuster: What more can you say about the rookie? 143 yards receiving, another touchdown, and a 96 yard kick return touchdown to break a seven year drought. Smith-Schuster set the Steelers’ rookie receiving record for yards in a season. He makes tough catches, he makes big plays. Just has to work on making a proper snowball.

Stevan Ridley: The Browns might be…the Browns, but their run defense is tough. Tops in the league, coming into today allowing 3.7 YPC. But the Steelers got off to a hot start running the ball, partially thanks to Ridley, who ran tough and showed the explosion that’s immediately made him the #2 and early down back.

Darrius Heyward-Bey: He made his impact early but you gotta give props to DHB. A true pro and still standout special teamer, his speed has never left him, outracing everyone on his 29 yard end around touchdown. Great moment for him and got the Steelers on the board first.

Stephon Tuitt: Maybe not the loudest day, he didn’t get a sack on a day where seemingly everyone else did, but he was solid against the run. At least two tackles for a loss and the Browns run game didn’t have much success. Isaiah Crowell and Duke Johnson held in check.

Matt Feiler: Can be difficult to evaluate the linemen on the first watch through but Feiler looked good. Mobile, physical, nothing that looked out of sorts. And the Browns have some good interior linemen. An early kudos to his first career start.

Tyler Matakevich/Sean Spence/Vince Williams: Throwing all the ILBs on this list. Spence didn’t have the most spectacular game but to his credit, keeps getting better each week. Williams, as he’s done all year to running backs, ran through Johnson for his 8th sack of the season. And Matakevich, despite needing shoulder surgery in the offseason per Mike Tomlin, did his thing on special teams. A punt deflection and forced a punt returner out of bounds for a loss. Good stuff all around.

Secondary: It wasn’t all terrible. But come on, these are the Browns. Making some plays against them is pretty much a given. What can’t happen are all the big chunk plays given up. A 54 yard completion to Josh Gordon where he was the only receiver in the pattern. A 56 yard touchdown to Rashard Higgins, outrunning everyone to the end zone. A 30 yard completion to David Njoku, making Joe Haden look silly in the process. And though this is a team thing, the multiple screens and third and long conversions given up. Sean Davis had his moments but he and Mike Mitchell haven’t been consistently good enough at safety.

Deshone Kizer has only looked competent against the Steelers. That’s a problem.

Chris Hubbard: To be totally fair, what a tough spot to be in. No fun having to come in as the emergency center in the cold with the backup QB in the game. But Hubbard objectively struggled with several bad snaps that stalled several promising drives. That’s always going to get you on the list. Still a big fan of what he’s done this season; just a rough spot and an equally difficult day.

Bud Dupree: More crickets from Dupree. On a day where everyone else at least got pressure, Dupree was nowhere to be found. I’m really hoping it’s all stemming due to his shoulder injury but it’s hard to use that as a metaphorical crutch for much longer. Dupree’s official stat line?