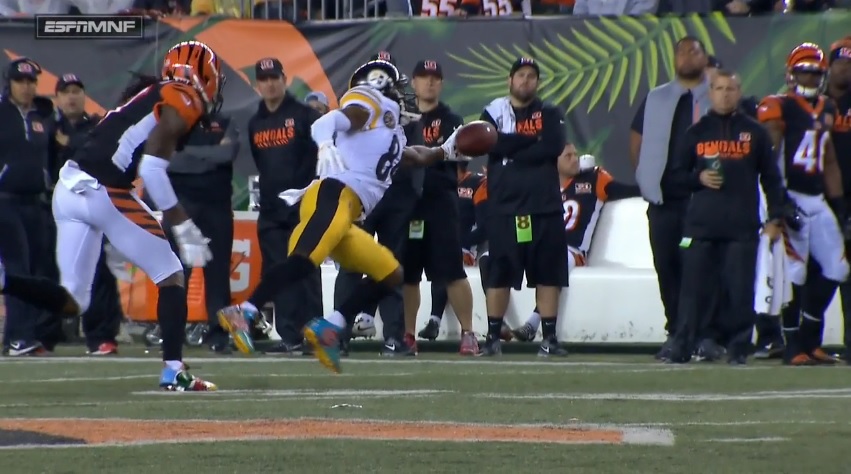 They can never make it easy, these Pittsburgh Steelers, can they?

Monday night’s bloodbath in the Queen City certainly took its toll, but in the end the Steelers emerged victorious over the Cincinnati Bengals in a hard-fought AFC North showdown on Monday Night Football.

Thanks to a last-second field goal from Chris Boswell for the second straight week and a strong defensive performance in the second half without star linebacker Ryan Shazier, the Steelers did just enough to improve to 10-2 on the season, keeping pace in the race for the No. 1 overall seed in the AFC.

It wasn’t pretty in a rain-soaked game, but Ben Roethlisberger turned it up a notch in the second half, helping the Steelers rally from a 10-point deficit heading into the fourth quarter of play to pull out a big win on the road against a division rivalry.

Early on, Roethlisberger flirted with disaster, getting picked off by Adam Jones and nearly getting picked again in the first quarter by Dre Kirkpatrick. Fortunately, Roethlisberger settled down and started to take what the defense gave him, resulting in a 24-for-40, 290-yard, 2-touchdown, 1-interception performance on the road.

Roethlisberger was sacked just once on the night despite having heavy pressure in his face consistently throughout the game, and his overall stats could have looked a lot better if a couple of Antonio Brown drops went his way.

Overall, Roethlisberger came up big when the Steelers needed him the most, and 10-2 has never looked better.

Kirkpatrick is going to have nightmares of Le’Veon Bell coming at him in the open field for the rest of his life, I’m sure.

Against the Bengals, Bell was his usual dominant self once again, racking up 76 rushing yards on 18 carries (4.2 yards per carry) and 106 receiving yards on five catches and a score, carrying the Steelers’ offense for the most part.

His touchdown reception was rather bizarre as Bengals second-year cornerback William Jackson III had a brain cramp, allowing Bell to slip right past him down the sideline for the touchdown. Bell also had a nice run-after-catch on a screen pass late in the first half, setting up the Steelers’ first points of the game that really seemed to kick-start the offense.

On the ground, Bell was patient and powerful, dishing out punishment at every opportunity. He’s an elite back and heating up at the right time.

James Conner came on in relief of Bell in the third quarter and looked pretty good on his three touches, drawing a facemask call on his first run while also dishing out some punishment to Bengals defenders.

Brown was superb again, hauling in eight receptions for 101 yards and the game-tying score, all while playing on a bad toe that nearly forced him to miss the game. The Steelers are sure happy he played. However, Brown struggled with some drops in the rain-soaked contest. I have no doubt the weather played a factor, but you’d like to see the all-world receiver make those catches.

Aside from Brown, Martavis Bryant continues to improve, finishing with four receptions for 40 yards on six targets, drawing a key pass interference call on Kirkpatrick down the right sideline in the fourth quarter. That being said, Bryant is struggling as of late to create separation on his go routes, which makes for even more difficult throws for Roethlisberger.

JuJu Smith-Schuster is now a marked man in Cincinnati for his block on Vontaze Burfict. I didn’t really have a problem with the block itself because crack-back blocks should be part of the game, but he can’t connect with Burfict’s head like that. The issue I have is him standing over a Burfict after the block. You never want to see that, regardless of Hines Ward doing that all those years ago. JuJu will learn from it, but his toughness as a 21-year old on the field is remarkable.

The Steelers found a gem.

Just two total catches for Jesse James and Xavier Grimble in this game, but both were key catches as Grimble’s tight end screen set up a 4th and 1 that Bell bulldozed over Kirkpatrick to convert, and James’ crossing pattern late in the fourth quarter picked up a first down, setting up Brown’s game-tying touchdown catch.

Grimble was targeted on Roethlisberger’s interception in the first quarter, but the pick was no fault of Grimble’s. He saw Ben in the scramble drill and continued to work open against the Bengals’ zone. Jones just made a great play.

As run blockers, James and Grimble didn’t really positively stand out, but I did notice James getting stacked at the line of scrimmage far too often, including getting pushed into Bell for a tackle for loss in the second half.

This team desperately needs a healthy Vance McDonald back for the ground game to really take off.

Yes, the offensive line helped the Steelers rush for an average of 4.2 yards per carry against a tough Bengals front, and yes they allowed just one sack and four quarterback hits of Roethlisberger, but against Cincinnati the Steelers gave up a ton of pressure off of four-man rushes, which is concerning.

Alejandro Villanueva had his hands full on Monday night against standout rookie pass rusher Carl Lawson, getting beat cleanly twice while also getting called for a holding penalty. Fortunately for AV, Ben was able to get the ball out quickly when he was beat, keeping Lawson off the stats sheet.

Chris Hubbard was solid again on the night, serving as a solid run blocker, but he did give up a sack to Carlos Dunlap on the night. I didn’t notice anything negative from Maurkice Pouncey and David DeCastro during live action, but Ramon Foster did struggle at times matched up against Geno Atkins. That’s something you live with against one of the best defensive tackles in football.

Overall though, this unit stood tall down the stretch, playing a key part in the Steelers’ game tying and game winning drives.

Just one tackle for loss from this unit one week after playing well against the Green Bay Packers. Against the Bengals, the front three of Stephon Tuitt, Javon Hargrave and Cameron Heyward struggled to shut down the Bengals’ run game, playing a part in allowing 5.9 yards per carry.

When one of those three did penetrate deep into the Bengals’ backfield, they didn’t receive much help from the linebacking corps. Hargrave really took it to Cincinnati center Russell Bodine in the second half, but Heyward and Tuitt struggled at times to get much of a push.

Losing Shazier on the Bengals’ first drive in the fashion that he went down was terrifying. As of now, some positive news has come out, but he’s not out of the woods yet.

After losing their best defensive player, the defense seemed lost and checked out emotionally, which is completely understandable. Without Shazier, the linebacking unit was exposed for the lack of depth it has, at least in the middle.

Vince Williams did more than his share of picking up the slack for his fellow inside linebacker, finishing with a game-high nine tackles, one sack, one tackle for loss and two quarterback hits in the win, but guys like Tyler Matakevich and LJ Fort struggled in place of Shazier.

While Matakevich did finish with seven tackles – tied for second-most on the team – he was picked on in his zone drops as the Bengals went right at him, and he was slow to scrape and close against the run. He did leave the game with a shoulder injury, forcing Fort into the game.

Fort was decent at times in coverage, but against the run he was a step slow coming downhill at times and struggled to get off of blocks.

On the outside, TJ Watt and Bud Dupree were mostly non-existent in the first half as pass rushers, but with the game getting tight the duo stepped up in a big way. Yes, Dupree blew a sack on Andy Dalton, but he redeemed himself on Cincinnati’s last offensive play of the game, sacking Dalton to force a punt, setting up the Steelers’ game-winning drive.

Watt drew a huge holding call that wiped out an AJ Green touchdown. While it was questionable at the time, watching the replay over and over again you can see Watt’s jersey being pulled. That’s called every time.

Aside from Artie Burns and Sean Davis, I think this grade is more than fair.

Coty Sensabaugh was a sieve on the night, getting torched by Green throughout the first half, forcing a benching in the second half for rookie Cam Sutton.

Sutton wasn’t much better, honestly, but he wasn’t as noticeably bad as Sensabaugh was in the first half. It was uncharacteristic of Mike Tomlin to put in a rookie like that in a big spot, but Sensabaugh had to come out.

Burns was terrific on the night, and it was weird to me that they didn’t match him up with Green after the Andy Dalton continued to target his No. 1 guy at after possible turn.

When Burns was going against Green Monday night, he forced three incompletions, drawing a facemask penalty on Green in the process.

Sean Davis also played a strong game in the box, finishing with seven tackles while setting the physical tone in the second half without Shazier on the field.

Robert Golden struggled at times to come downhill against the run and pass, including on a couple of RPO’s by Dalton that saw tight ends Tyler Kroft and CJ Uzomah slip into the second level wide open.

Overall though, this secondary needs to improve quickly. They’re trending in the wrong direction, but it’s tough when you’re missing two key veterans like Mike Mitchell and Joe Haden.

If I could give JJ Wilcox his own grade, it would be a bright-red F. He cost the Steelers a kick return for a touchdown by Bryant, and he also pushed the ball back into the Steelers’ own end after a second holding call. He was a major problem for the Steelers’ special teams on the night.

Chris Boswell was terrific once again, drilling all three field goals and both extra points he attempted. He’s as good as they come in the NFL, including Justin Tucker even if he doesn’t have the same leg strength as Tucker.

I was wrong about Jordan Berry’s performance last week, so I watched him much more closely this week. He was very good in a driving rainstorm. On four punts, Berry averaged 44.5 yards per punt, downing three inside the Bengals’ 20-yard line, including a long of 58 yards.

On punt coverage, Brian Allen is turning into quite the player for the Steelers. He’s consistently around the ball and is often the first person down the field ready to make a tackle. That’s looking like a strong late-round pick by Kevin Colbert so far.