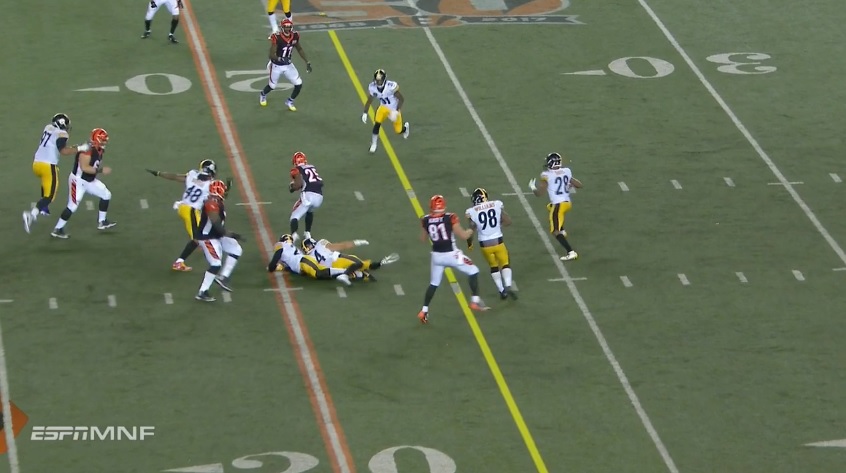 In a heated rivalry matchup Monday night on the road in Cincinnati, the Pittsburgh Steelers’ defense turned in one of its best tackling performances of the season, even after losing defensive leader Ryan Shazier to a scary injury on the Bengals’ first drive of the game.

For the Steelers to not only storm back from a 17-point deficit to win, but stay focused – for the most part – defensively in the tackling department speaks volumes about the mental toughness and maturity of this team.

Recording just eight missed tackles in a game in which your best defensive player leaves on the opponent’s first drive strapped to a backboard is, honestly, impressive. I can’t really find another word for it because it’s tough to continue to play with physicality as a defender when you see a teammate go down like that on a routine tackle.

But credit to the Steelers’ defense, which has some impressive mental resolve.

Sean Davis struggled at times coming downhill against the run to miss a few stops on Gio Bernard, while Robert Golden compiled his tough night with the second-most missed stops on the team in the win.

Brian Allen continues to emerge as a great special teams player, but he did miss a tackle on the Bengals’ last kickoff return, allowing Alex Erickson to pick up additional yardage when it looked like he would be stopped inside his own 10-yard line.

With Shazier out of the picture, it wasn’t much of a coincidence that the Bengals were able to establish a run game, first with Joe Mixon before Bernard took over for the injured rookie midway through the second quarter.

Bernard is a guy I loved coming out of North Carolina. I’m a big fan of him in Cincinnati too, and I hope he moves on at some point to become a focal back.

The Bengals continued to feed the rock to Bernard, and the fourth-year back continued to pick up chunks of yardage while making defenders miss.

Here, Bernard follows the attempted kick-out block by tight end Tyler Kroft, negating Steelers linebacker Bud Dupree out of the play, which in turn forces a one-on-one matchup in the hole with Davis.

The Steelers’ safety ducks his head at the last second, allowing Bernard to get out of the way of the attempt. Fortunately for Davis, Matakevich and Cam Heyward are there to clean up the miss, stopping Bernard for busting off a big run.

Cincinnati had a ton of success on zone runs out of shotgun, allowing Bernard to pick the path of least resistance against the Steelers’ defense.

On this run late in the third quarter with the Bengals’ backs up against the wall in their own end, Bernard sets up his offensive line’s blocking quite well, but backup linebacker LJ Fort does a nice job of sliding around Andre Smith’s block to get a hand on Bernard in the hole.

As Fort slides over, backup safety Robert Golden comes downhill to try and make the stop, but much like the Davis/Matakevich miss earlier in the game, Golden ends up knocking both himself, and Fort, off of the tackle attempt, allowing Bernard to pick up additional yardage.

Overall, this was a strong defensive performance from a tackling perspective on the road in primetime by the Steelers. Without Shazier moving forward, the Steelers’ defense can look back on this game with pride knowing that they showed up in a big spot without their leader and had one of the best tackling performances of the season.