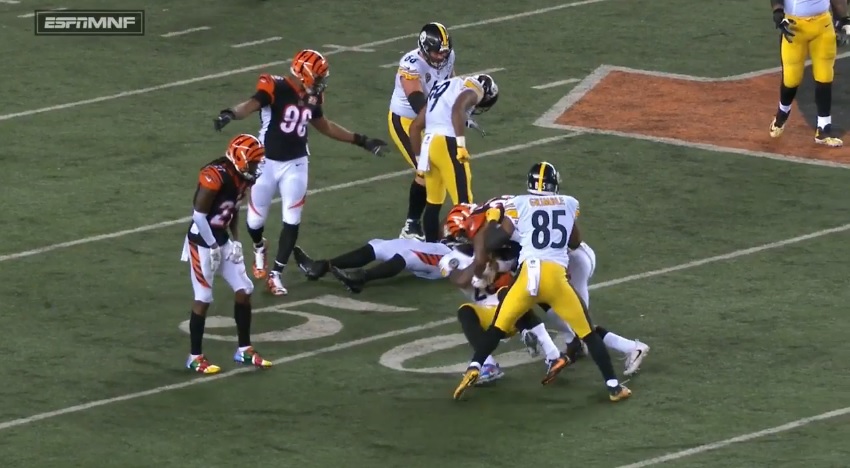 This is a minor point in the overall discussion of the game but is the key difference in the rivalry between the Pittsburgh Steelers and Cincinnati Bengals. The Steelers have veterans who can diffuse situations, keep a cool head, and make sure they don’t beat themselves. The Bengals do not.

Two actions sum that up, both involve protecting JuJu Smith-Schuster. Right after his hit on Vontaze Burfict, it was David DeCastro who rushed over to push him off Burfict and get inbetween JuJu and the rest of the Bengals to prevent anyone from going after the rookie.

Despite the big hit and the then-apparent injury to Burfict, there was no major scrum in the aftermath. Cooler heads prevailed and DeCastro helped in doing so (and probably tried to avoid Smith-Schuster getting flagged for taunting, to no avail).

The second was less noticed and came after the game. Pittsburgh completed their comeback and players began to pour onto the field, where emotions were still running hot and with no consequences, the potential for another scrum to occur. It’s only a brief look but camera caught Darrius Heyward-Bey seeing Smith-Schuster start to run onto the field and then pushing him back, not letting him get near any Bengals’ player.

Looks like DHB didn't allow JuJu to get near the Bengals after the game. Pushed him back. Veterans did a great job making sure things didn't escalate more than they did. #Steelers pic.twitter.com/cyazjoYjhT

Again, really small looking things. But in those moments, veterans have to step up and protect their teammates, especially rookies who probably don’t fully understand a rivalry like Steelers/Bengals. It’s another example of the character, culture, and leadership that exists in the Steelers’ locker room.