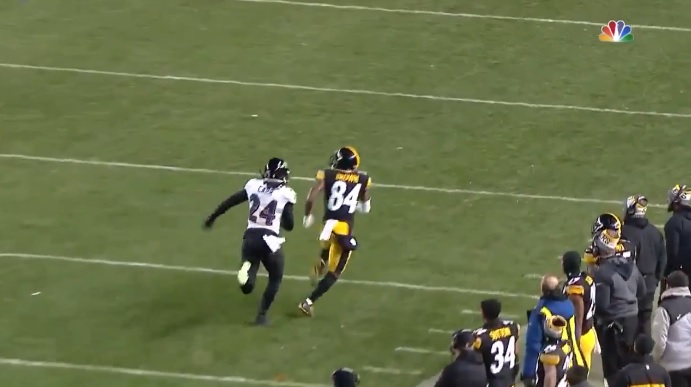 When one soldier falls in battle, the others will rally around him. That’s exactly what the Pittsburgh Steelers planned to do Sunday night as they were without their linebacking leader in Ryan Shazier. The battle was one that went down to the wire, but ultimately it was the play of Ben Roethlisberger and Antonio Brown that gave the Steelers a 39-38 victory over the Baltimore Ravens.

Just like the AFC Divisional matchup six years ago, Roethlisberger and Brown connected on a deep pass down the sideline to put the Steelers in range for the go ahead score. Brown finished with 11 receptions for 213 receiving yards and Roethlisberger threw for over 500 yards passing.

Just like the finish, this contest was a back and forth high scoring affair, a surprising and unusual result for typical Steelers and Ravens matchups.

The Steelers jumped out to an early 14-0 lead, with Roethlisberger emerging strong out of the gate. Roethlisberger had 220 passing yards and one touchdown at halftime. Running back Le’Veon Bell chipped in on both touchdowns, catching the first and punching in the second from the goal line to give the Steelers’ their early lead.

The Steelers were in for a scare when Bell exited with a knee injury early in the first half, though the running back returned shortly later.

The absence of Shazier showed to be a real scare though as the Steelers defense was unable to contain the Ravens’ offense. The Steelers’ defense showed their inability to contain the big play. Joe Flacco connected with Chris Moore on a 30-yard touchdown pass for the Ravens’ first score. Moore got behind the Steelers’ secondary as Flacco threw a perfectly arched touchdown pass for the score. The Ravens’ second score came via the running game as Alex Collins scampered 18 yards into the end zone.

The fourth quarter would prove to be an eventful one as the Steelers pushed their way back into the game. Bell’s third touchdown of the game would put the Steelers down two with just over three minutes remaining. Roethlisberger and Brown would do the rest, putting the Steelers ahead though the Ravens would have one last chance to retake the lead. T.J. Watt would put the finishing sack on Flacco to secure the victory for the Steelers.

Though the Steelers secured the victory and kept pace as the AFC’s number one seed, tonight’s contest showed a few concerns with the Pittsburgh defense. Without Shazier, the Steelers allowed over 400 yards of offense and over 100 yards rushing. Flacco threw for 269 yards and Collins averaged almost seven yards per rush on the Shazier-less defense.

The Steelers will now prepare for the biggest game of their season next week, as they host the New England Patriots next Sunday at 4:25 for what is likely to be home field advantage in the AFC.