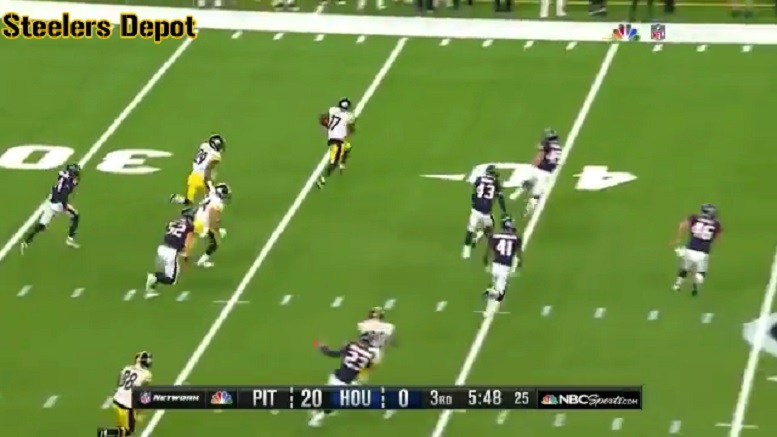 The Pittsburgh Steelers have had trouble with certain aspects of their special teams for a bulk of the 2017 season. Kicker Chris Boswell has been terrific and punter Jordan Berry consistent, but the return game, especially, has been terrible this season. That is until Monday’s road game against the Houston Texans.

Heading into the team’s Monday game against the Texans, the Steelers were only averaging 5 yards per punt return. A return game that used to be lethal with wide receiver Antonio Brown running back punts has gone dormant this year.

Wide receiver Eli Rogers was aggressive and efficient while returning punts in Monday night’s game, however. Rogers returned 5 punts for a total of 82 yards against the Texans, which averages out to 16.4 yards per return. That number is much better than any game this year for either Rogers or Brown, who missed the game against the Texans with a calf injury.

The Steelers first drive of the second half started on their own 36 yard-line due to a 15 yard return by Rogers. After the Steelers and Texans both went three and out, Rogers returned the very next punt (52 yards) by Texans punter Shane Lechler for 27 yards to Houston’s 42 yard line. That return, by the way, was the Steelers longest of the season. Additionally, the resulting drive ended with a touchdown. Rogers is the reason that the Steelers were in a good position to score on that drive and that’s a great sign as field position is going to become pivotal in the playoffs.

Berry averaged 47.7 yards per punt against the Texans which was 4 yards above his season average and Boswell did what he normally does and that successfully kicking field goals. Boswell is now 33-of-36 on the season with field goals and 30-of-31 (96.8%) for his career in December, an NFL record for this month.

The Steelers are going to need their special team units playing well come playoff time. I expect Berry and Boswell to continue their high level of play, but Rogers could be the difference maker. It is unrealistic for Steelers fans to ask Rogers for multiple 20-plus yard returns each game, but a couple breakout returns here and there could be the difference in a matchup.