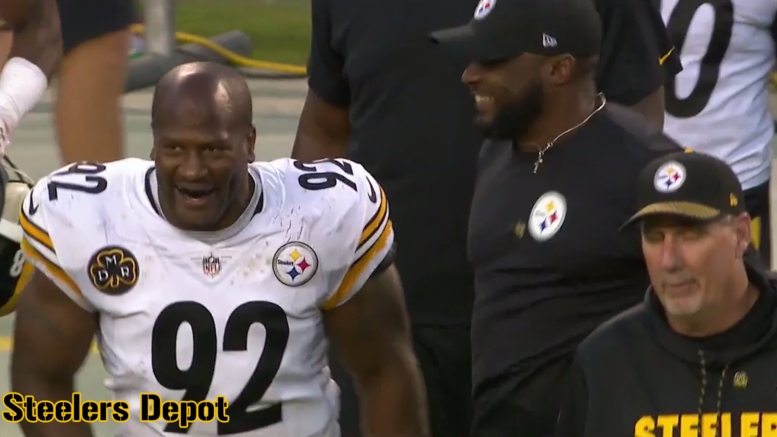 When outside linebacker James Harrison exited the Pittsburgh Steelers facility for the last time over the weekend he probably felt more relieved than anything else. Face it, Harrison wasn’t happy about his role with the team this season and you could tell that long before he told the media a few weeks ago that he wouldn’t have re-signed with the Steelers this past offseason had he known he would barely play this season.

With Harrison’s Tuesday signing with the New England Patriots now roughly 24 hours old, a few of his former teammates are starting to give us a little better glimpse as to what kind of person Harrison may have been during the last several weeks.

Steelers outside linebacker Bud Dupree reportedly said Wednesday that he doesn’t want to see the media turn Harrison into “the victim” or make it sound like the Steelers “made him leave”, according to Chris Adamski of the Pittsburgh Tribune-Review.

Bud Dupree is says he doesn’t want the media to turn James Harrison into “the victim” or portray that the Steelers “made him leave.”

“It’s funny to read the stories. This is something he wanted to do. It’s not like they got together and said, ‘We’re going to go cut James.’ No, that’s not what happened and he needs to come out and admit that,” Pouncey said.

If you have paid attention to a few social media remarks made by a few Steelers players since Harrison signed with the Patriots and combine them with what Dupree and Pouncey both said on Wednesday, then it’s not hard to speculate that Harrison wanted out of Pittsburgh. Specifically, if you saw the social media video that Harrison posted a few weeks ago in which he basically mocked the Steelers for listing on their injury report a few times you could tell there was friction between him and the organization.

After not playing in the Steelers Week 15 game against the Patriots despite being dressed for the game, that was probably the straw that ultimately broke Deebo’s muscular back.

So, did the Harrison demand that the Steelers waive him ahead of the team’s Week 16 game against the Houston Texans? That’s what it sounds like. If that was the case then head coach Mike Tomlin was clearly covering for Harrison during his Tuesday press conference after stating that the reason the linebacker was released was just merely a football-related move.

“I’ll let the discussion that James and I had between he and I. I think that is appropriate,” Tomlin said.

Get yourself some extra popcorn ready as I’m sure the war of words between Harrison and his former Steelers teammates is just now getting started. We can only hope that the Steelers ultimately get to play the Patriots in the AFC Championship game as the storylines ahead of such a contest would be epic.

In the meantime, however, fans will continue to debate if Harrison has now ruined his Steelers legacy. Will he ever make amends with the Steelers down the road, or will he distance himself from the organization much in the same way that former Steeler greats Terry Bradshaw and Troy Polamalu both seemingly have? Time will tell.