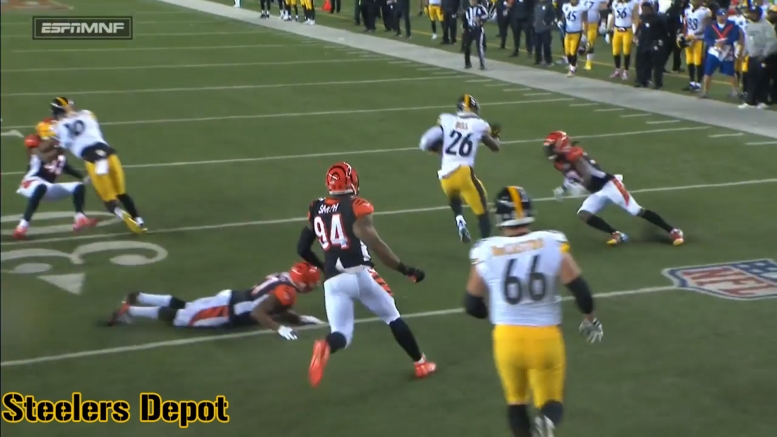 It is a bit curious that in a few months’ time we have gone from wondering how the Pittsburgh Steelers could inject rookie wide receiver JuJu Smith-Schuster into their offensive framework organically to wondering how they can play through a game without him.

But that is the mission they are on tonight as the Steelers host the Baltimore Ravens, a game for with Smith-Schuster was suspended for what was called a blindside block on Vontaze Burfict that made helmet contact, after which he stood over the concussed linebacker, which drew a second flag for taunting.

While the rookie has apologized for his actions and contended that that is not the type of player or person that he sees himself to be, the league saw it necessary to make him out as an example, in part fueled by a witch hunt ignited by Jon Gruden in the announcers’ booth, who immediately demonized him after previously saying he would pay to watch Burfict, who has twice been suspended for his on-field conduct.

But I digress beyond my point here, which is how the Steelers replace Smith-Schuster. The good news is that they have already dealt with this recently, as the rookie missed a game two weeks ago with a hamstring injury.

Not that it worked out particularly well. His replacement wide receivers combined to drop four passes, including a couple on third down and another in the end zone. But the Steelers have more options available to them this time around.

Even as his illegal block showed, replacing Smith-Schuster is more than just finding another set of hands, because his role as a blocker is also important. But they are finally getting back tight end Vance McDonald, which should take care of that issue, and should lend itself to more two-tight-end sets.

Another tool they can use, which they used only moderately against the Packers when he was out, would be to make greater use of running back Le’Veon Bell, not just in the passing game, but also explicitly as a receiver up at the line of scrimmage.

This season, Bell has taken 81 snaps at wide receiver, and the Steelers have averaged 5.5 yards per play, penalties included, in those situations. Bell himself has been targeted 18 times in these situations, oftentimes in short-yardage situations, yielding 4.7 yards per play. Not all of these, of course, would be designed plays.

Given the issues of Eli Rogers and Justin Hunter in their limited opportunities, one option I would like to see them explore is greater usage of Darrius Heyward-Bey, which is something that I have written about previously.

Considering there have already been drop issues, Heyward-Bey’s hands shouldn’t be held against him. he also has size and the best speed at the position on the team. He also brings the physicality to the position that Smith-Schuster does. In fact, Smith-Schuster took over Heyward-Bey’s roles that he occupied last season—including the receiver with the hyphenated name.