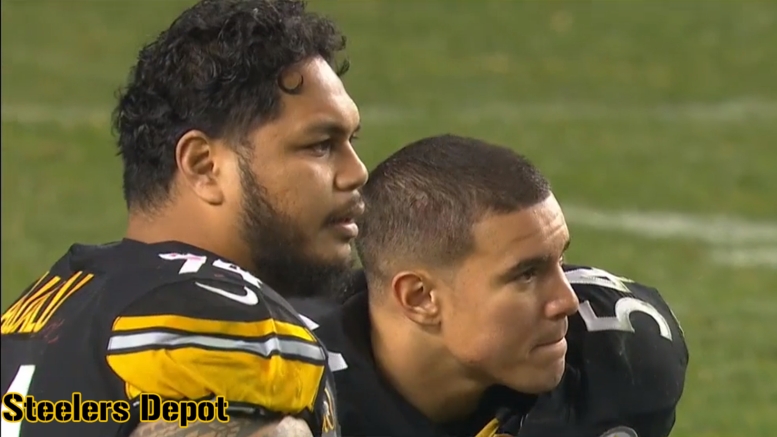 In the Pittsburgh Steelers’ heart-rending loss to the New England Patriots last evening, the team was not defeated. The locker room is, if anything, resilient. We have learned that, if little else, about the 2017 edition of the Pittsburgh Steelers over the course of a season filled with controversy, adversity, and close wins.

The stench of this loss will linger, but it will only fuel the drive for the road ahead. While the first seed in the AFC is still in play, it is no longer in their control, but the Steelers demonstrated that they can hang with any team in the league, and they now believe more than ever that they can do so, at any time, in any venue.

That was the sense in the locker room last night after the loss. Mike Prisuta, for example, observed, “they’re pissed, not devastated”. To my mind, that sums up exactly the attitude that a winning team should take away from a game like yesterday’s.

Take Eli Rogers, who told Joe Rutter, “we’ll definitely see them again. And the outcome will be different”. The venue may be different as well, but the Steelers have been winning in opposing team’s stadiums all season. They are 6-1 away from Heinz Field, with a trip to Houston the only one remaining.

As long as they continue to handle their business, they should at least secure their first bye week in the playoffs since 2010, which would allow them to play a home game in the divisional round—not to mention avoid the wildcard round entirely. They would, at most, have to play just one game in enemy territory, which they should be able to handle.

Through the melodrama of Martavis Bryant’s return from suspension and his subsequent dissatisfaction with his results and his role, to the controversy over how the team chose to handle the national anthem. The violent attack on a water cooler. The traumatic injury suffered by Ryan Shazier.

This locker room has been through a lot together this year, and they’ve used these trials and tribulations as a galvanizing force to drive them forward. That drive very nearly saw them topple the Patriots last night in the first of what they hope is two showdowns with New England, and it fuels their belief that they will overcome even that obstacle the second time around.

You should believe in this team because this is a group that believes in themselves, and there is nothing deadlier than a combination of confidence and ability. The team feels it was robbed of an opportunity last night. They have come to adopt the phrase “Steelers vs everybody”, but, really, it’s Steeler Nation vs everybody.