The Pittsburgh Steelers will play their Week 17 game at home Sunday afternoon against the Cleveland Browns and the game could wind up being meaningless for them depending on how another game goes well to the east of Heinz Field. There are a few other entertaining games taking place on Sunday with a few playoff scenarios intertwined, so with that, here is your fan rooting interest guide for Week 17 in addition to the AFC seeding picture entering today’s games.

In order for the Steelers to get the No. 1 seed and home-field advantage throughout the playoffs they’ll need to beat the Browns on Sunday and hope that the Jets can somehow manage to upset the Patriots at Foxboro and in very cold conditions at that. The unlikely victorious Jets will be led Sunday by seldom-used quarterback Bryce Petty, who ha completed just 47.4% of his passes this season in his very limited playing time. If the Jets have any hope at all to win this game it’s likely related to the weather. The Patriots figure to play a lot of their healthy starters in this game with the hopes they can put the contest out of reach quickly. At the very least, Steelers fans should be hoping that the Jets can at least keep it close.

Why this game? Steelers fans should probably root for the Chargers to beat the Raiders on Sunday in addition to a few others games going right for the visiting team so they can make the playoffs as the No. 6 seed in the AFC. Why the Chargers? They are built well enough to not only beat the Jacksonville Jaguars in the AFC Wildcard Round of the playoffs, but the Patriots as well in the Divisional Round. How great would it be to see a AFC Championship game between the Chargers and the Steelers featuring two quarterbacks from the 2004 draft class in Philip Rivers and Ben Roethlisberger. In case you’re curious, here’s what needs to happen on Sunday in order for the Chargers to make the playoffs. 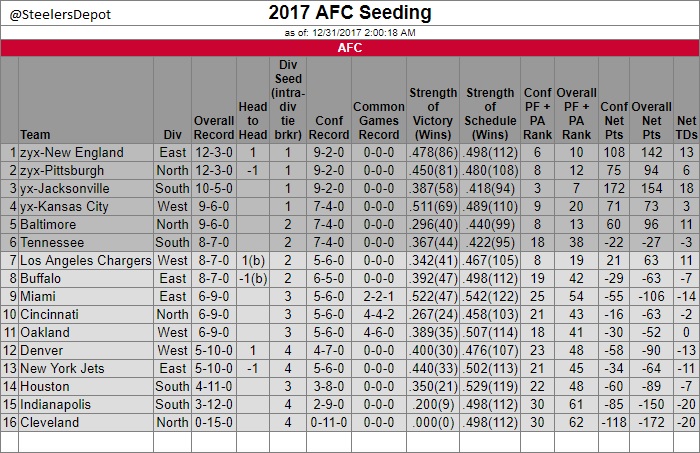