The Pittsburgh Steelers will play their Week 14 game at home Sunday night against the Baltimore Ravens and another win will result in them remaining the top seed in the AFC for yet another week in addition to making them AFC North champions.. There are quite a few other entertaining games taking place on Sunday, however, so with that, here is your fan rooting interest guide for Week 14 in addition to the AFC seeding picture entering today’s games.

The Steelers can clinch a playoff spot before their Sunday night game against the Ravens even gets underway if the Colts beat the Bills during their afternoon contest. Nathan Peterman, the rookie from Pittsburgh, will reportedly start Sunday for the Bills in place of an injured Tyrod Taylor. Peterman threw five interceptions in the first half of a 54-24 loss to the Los Angeles Chargers in his first NFL start a few weeks ago. The Colts, on the other hand, have lost six of their last seven games and are 1-5 on the road this season.

It hopefully won’t ultimately matter who wins this game, but Steelers fans might want to root for the Seahawks to beat the Jaguars on Sunday just the same. The Jaguars own head-to-head tiebreakers over the Steelers and thus they are perhaps the only team that could keep Pittsburgh from getting a first-round bye in the playoffs. The Jaguars would, however, need to finish with an identical record as the Steelers in order for that to happen and right now they have two more loses than Pittsburgh does. Here’s to open they get another loss Sunday afternoon.

The Steelers will host Patriots next Sunday at Heinz Field in a gamer that might ultimately decide which team is the No. 1 seed in the AFC. In short the Patriots could lose this week to the Dolphins and still wind up being the No. 1 seed in the AFC if they win out. Regardless, it would be nice to see the Patriots lose Sunday on the road in Miami to the Dolphins. The Patriots will not have tight end Rob Gronkowski on Sunday due to him serving his one-game suspension. What the post game injury report from this contest very closely. 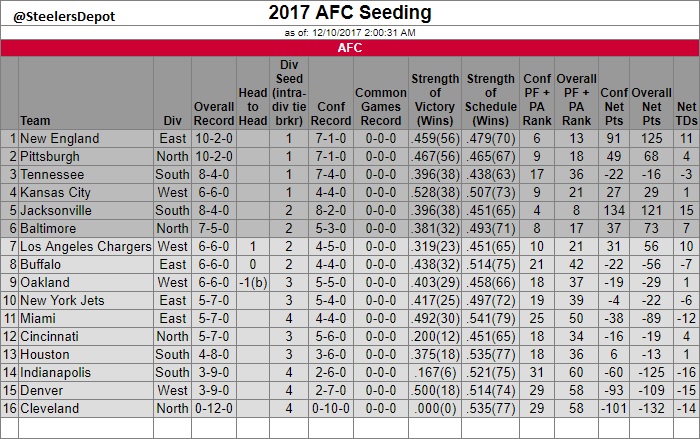