The Pittsburgh Steelers will play their Week 13 game on the road Monday night against the Cincinnati Bengals and another win will result in them remaining the top seed in the AFC for yet another week. There are quite a few other entertaining games taking place on Sunday, however, so with that, here is your fan rooting interest guide for Week 13 in addition to the AFC seeding picture entering today’s games.

Don’t look now but the Ravens are still the No. 6 seed in the AFC and with a little bit of help on Sunday and combined with a win of their own, they can increase their hold on a potential Wild Card spot. The Ravens defense continues to win therm games and Sunday they should get a nice test from Lions quarterback Matthew Stafford. It will be interesting to see how the Ravens control the Lions offense and if Baltimore quarterback Joe Flacco can finally get the offense clicking a littler better. This should be a great game to watch.

Ho-hum another seemingly easy game for the Patriots. At least this one is on the road and against a team that still has a shot at an AFC Wild Card spot. The Patriots could be missing a few key players on Sunday due to injuries but even so, they’re still more than a touchdown road favorite in this contest. Bills quarterback Tyrod Taylor and the rest of the offense will need a near flawless performance Sunday afternoon to knock off the now-seemingly unbeatable Patriots. Once again, root for the unlikely to happen.

The Steelers got a little bit of breathing room in the AFC seeding last Sunday thanks to the Jaguars losing to the Arizona Cardinals in overtime. That loss, combined with a win by the Tennessee Titans, dropped the Jaguars to the No. 5 seed in the AFC. The Steelers own head-to-head tiebreakers over the Titans but not the Jaguars so just in case Pittsburgh slips up a few times in their remaining five games, root for another Jaguars loss on Sunday. Besides, I think most of us would like to see the Patriots host the Jaguars in the Divisional Round of the playoffs, right? 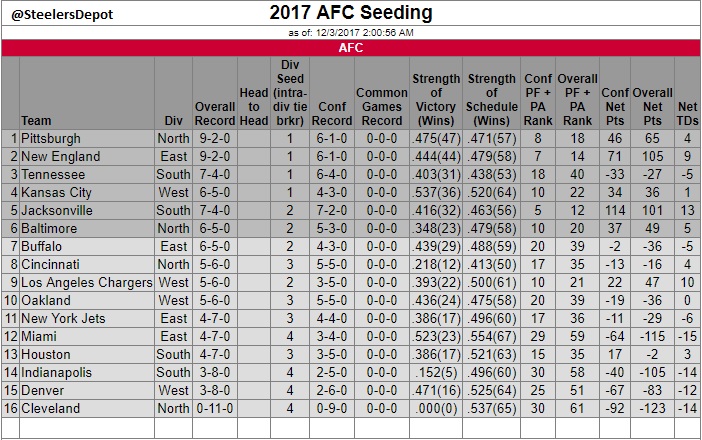