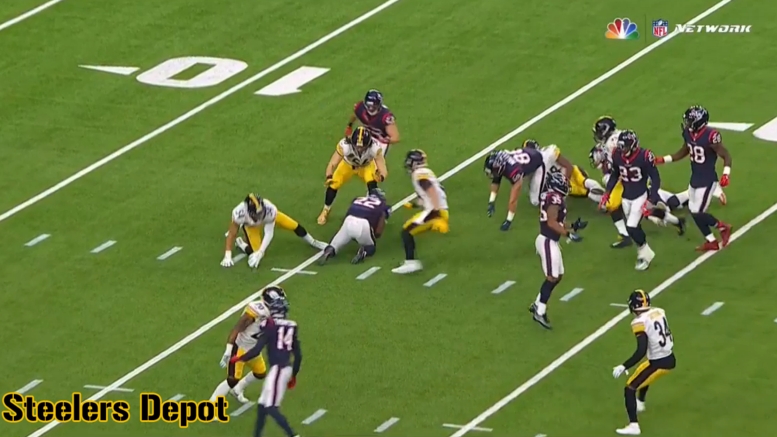 The Pittsburgh Steelers had a pretty strong game on special teams against the Houston Texans, and that even included a blocked extra point negated by an offside penalty that subsequently led to a successful stop on a two-point attempt.

With James Conner on injured reserve, Xavier Grimble replaced him on the kick return unit as part of the level ahead of the returners on the right flank. To give some perspective, the others on that line were L.T. Walton and Roosevelt Nix.

Darrius Heyward-Bey chased down a returner on the Texans first kick return from the back side, though he reached the 27. A holding penalty drawn by Vince Williams was enforced back to the 15.

Because I covered the punt return team, I’ll not touch much on Eli Rogers. Cameron Sutton has continued to take Coty Sensabaugh’s snaps. On the first return, he hovered over the middle before bailing late to drift to his right as a vice jammer with Brian Allen.

L.J. Fort brought down former Steeler Jordan Todman on Houston’ next kick return at the 16. The linebacker did a great job of sliding past the block of the upback, but Todman ultimately gave himself up as he lost his balance trying to cut away from Fort.

Sutton was used as a vice jammer with Artie Burns on the other side on the next punt. Burns slipped up early but Sutton stuck with the gunner half the way down on a punt Rogers should have been able to return.

On Jordan Berry’s first punt, he traded distance for hangtime, only booting it 39 yards but with no return. Allen was vice jammed and would have been slowed on a deeper punt. Heyward-Bey induced the fair catch from the far side of the coverage.

The Texans blasted Kameron Canaday on an extra point attempt, drawing unnecessary roughness. Chris Boswell’s ensuing kickoff from the 50 was unsurprisingly a touchback.

Pittsburgh used vice jammers on both gunners later in the game, Sutton helping Burns and Heyward-Bey helping Allen. It was part of the reason they got off a 16-yard return. They did the same thing in the third quarter and got a 15-yard return from it.

Allen forced a fair catch at the 10 off of a 47-yard punt in the middle of the third quarter.

In his first game back healthy, Joe Haden took Sutton’s spot that he took from Sensabaugh on the field goal blocking unit. Late in the game, he came off the left side and was actually able to block the extra point, but as I mentioned earlier, he was offside.

Putting the ball at the one, Houston went for two after that, the pass going high to DeAndre Hopkins, incomplete. This is where Williams drew his taunting penalty for ‘celebrating’ with the receiver.

After that score, the Texans tried a pooch kick, which Grimble fielded over his shoulder at the 21, not trying to advance it.

Burns was burned as a jammer late in the game, but Rogers refused to settle for a fair catch, juking the defender in his face to advance the ball three yards.

Allen had a hard time beating vice jammers on a 57-yard punt late, but Heyward-Bey’s pressure from the other side limited the return to just seven yards, with Allen ending up making the tackle.

While Rogers did the legwork on a late 21-yard punt return, breaking a tackle, Fitzgerald Toussaint also notably threw a block that helped get him down the field further.