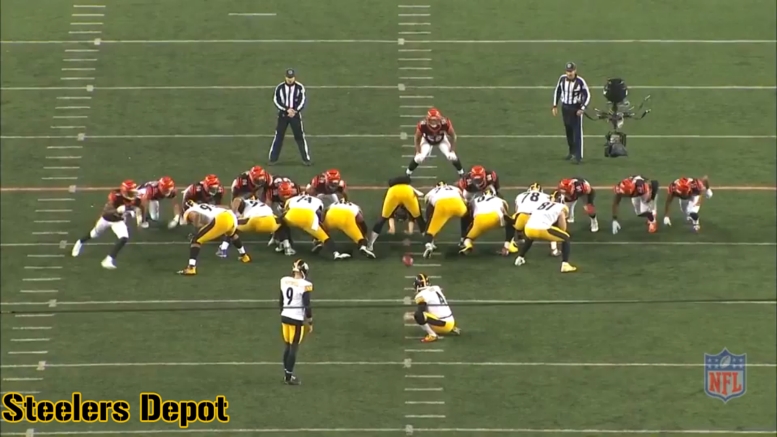 To open the game, the Pittsburgh Steelers moved back to using evenly-spaced kick returners, both Martavis Bryant and Fitzgerald Toussaint lined up along the goal line, equidistant from one another. The spacing crept closer to Bryant in the center on the second kick.

There doesn’t appear to be a lot of consistency anymore at left gunner. Mike Hilton started the game there, but others have been used as well since he is starting. He induced a fair catch on the first punt.

He was replaced by rookie Brian Allen on the Steelers’ second punt, and the Bengals bracketed him with two jammers. He nearly broke in between them, but he got shoved down from behind. Jordan Berry got off about a 53-yard punt, but there was room for the returner as a result of that, getting past the 20. Robert Golden made the tackle.

Allen also opened the game as jammer, paired with Darrius Heyward-Bey in a vice formation, with Artie Burns as always on the opposite side. On a later punt, Allen’s gunner ran himself out of bounds without re-establishing himself, and Heyward-Bey’s veteran mind pointed it out to the officials to assure a flag was thrown.

On the first kick Bryant returned, T.J. Watt and Arthur Moats buried one Bengals defender—unfortunately down the field, as the return never got that far. The Bengals did a good job of looping and swapping lanes, getting some penetration and a stop inside the 20.

On the field goal before the half, Josh Shaw either came very close to getting his fingertips on the ball, or actually did so. Yes, it was around Jesse James. The Bengal next to him used the defender to his right to launch himself, which should have been a penalty.

The Steelers did not have to kick off at all in the first half since they received the ball first and never scored with time remaining. On the second half opening kickoff, Allen was on the unit. I’m honestly not sure who he replaced.

On the would-be Bryant touchdown, it was L.J. Fort and Anthony Chickillo who threw the key block that got him through the ranks. Of course, J.J. Wilcox’s hold right up the middle negated the whole thing.

The Steelers didn’t even reach the 40 on the ensuing drive, but Berry got off a good punt fielded at about the five. Allen got inside vice jammers and made the initial tackle, Heyward-Bey—who also dealt with vice jammers—cleaning it up. Good coverage play all around.

On return negated, Wilcox initially lined up as a vice jammer, working with Cameron Sutton, who replaced Burned as the right jammer, the first rep by anybody else this season in that role. Sutton also took over the left edge rusher role on the field goal blocking unit.

Also of note is that Moats replaced Tyler Matakevich on that punt return unit. He was replaced previously this season by Watt on the punt coverage unit. Allen was flagged for unnecessary roughness, but it’s hard to tell if it was merited, though an official was right there.

As Alex Kozora previously noted, James Conner replaced Matakevich on the kick coverage unit. Darrius Heyward-Bey made the tackle on the kick after the fourth-quarter field goal inside the 25.

After one rep, Sutton was replaced again by Burns as the right jammer. This time Wilcox flipped the gunner, drawing his second hold of the game.

Of note is that Allen served as jammer the entire game, and as gunner for most of it, and even played on kick coverage, so he’s getting a lot of special teams work now.

The kick coverage after the game-tying touchdown was excellent. Conner actually got down there quickly and absorbed the upback, forcing the returner to cut right. Coty Sensabaugh strung him out of bounds at the 12. Allen overpursued a bit, to be fair.

After jumping offside on the first game-winning field goal attempt, Shaw legitimately came within about half a foot of getting a hand on the ball. The Bengals overloaded the left (offensive) left side, making it difficult for Stephon Tuitt, the left wing, to slow him down.