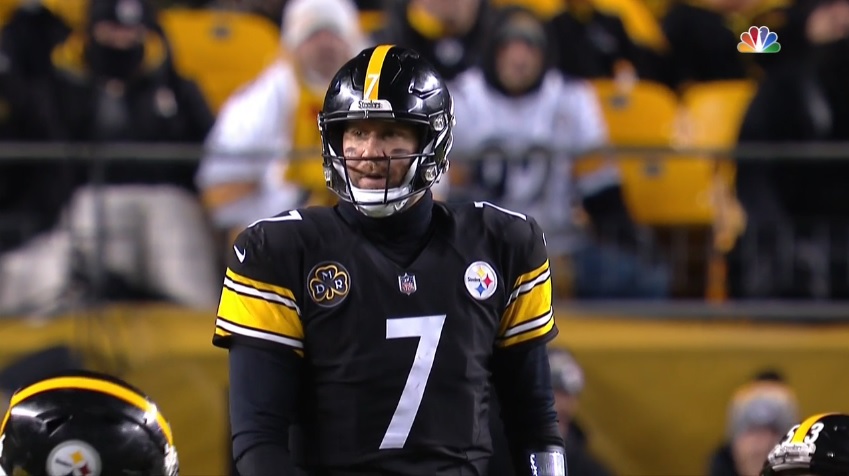 – First, the score. A 39-38 final is only the third such final in NFL history and only the second in the regular season. Last one was the Denver Broncos beating the San Diego Chargers in 2003. The 49ers beat the Giants in the 2003 NFC Wild Card game, too.

– Ben Roethlisberger’s 66 attempts is tied for 6th most in NFL history and the most by any active QB, beating out Philip Rivers and Tom Brady by one. The all-time record, if you’re curious, is Drew Bledsoe’s 70, set back in 1994.

And Ben’s 44 completions is second all-time, only one behind Bledsoe (from the same game) who completed 45 of those 70.

– Antonio Brown is the first Steeler in franchise history to have multiple 200+ yard receiving games. 213 tonight.

– Bell and Franco Harris are the only two backs in Steelers’ history to have multiple games of two rushing and one receiving touchdowns. Bell also did it in 2014 while Harris did his in 1972 and 1979.

– Jesse James’ 10 receptions and 97 yards are football highs for him. Didn’t have that many in the NFL or at Penn State.

James is the first Steeler TE with ten catches in a game since Heath Miller on December 23rd, 2015, an AFC North win over the Bengals. Miller caught ten only three times in his career.

– Martavis Bryant (who, by the way, should’ve been on my losers list) caught six passes for 33 yards tonight. No Steeler WR in history has ever had so few yards on at least six catches.

Bryant also returned five kicks for 55 yards, an average of 11 per try. That is one of the worst marks in league history. Not since Tampa Bay’s Vernon Turner in 1994 has a KR had a worse average on at least five attempts. Ron Brown in 1988 has the worst ever (8.4).

– Chris Boswell has made 32 field goals this season. That’s two shy of the Steelers’ single season record set by Norm Johnson in 1995. So yeah, Boswell should clear that.

– The Steelers offense ran 85 plays tonight. That’s their most since December 8th, 2002, when they ran a franchise record 95 against the Houston Texans. Weird enough, they only scored six points that day, falling to the expansion Texans.

– Last one. Pittsburgh recorded 12 third down conversions for only the 6th time in franchise history. Last did it in 2010. Second time under Mike Tomlin. Franchise record is 15 set in 1999.