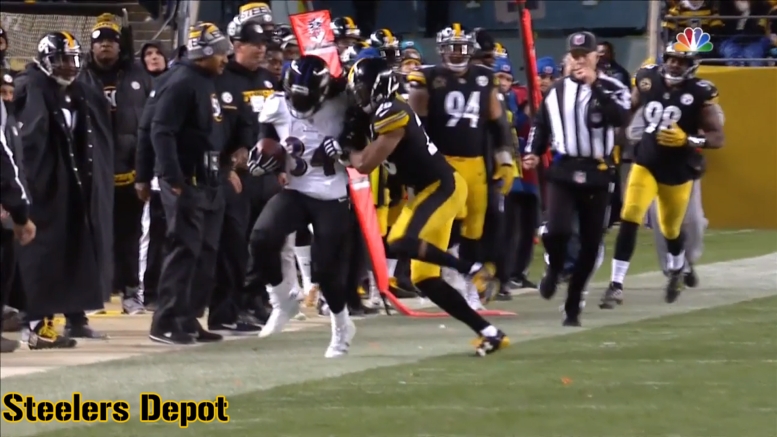 Considering how the night started, it sure didn’t turn out to be Sean Davis’ day, did it? The Pittsburgh Steelers’ starting strong safety ended the Baltimore Ravens’ opening drive with an interception that he returned 35 yards to the 41-yard line from the red zone, but the game was pretty much downhill from there.

Though he posted a team-high—and career-high—12 tackles, while nobody else had more than seven, it was a sloppy and maddening performance from the second-year safety, whose play has been something of a seesaw through much of the year. He has saved a few touchdowns, but also allowed a few in turn.

The gravest concern, however, is what doesn’t turn up in the stat sheet, and that is the missed tackles. Davis has become among the worst offenders in this department on the defense, and, consequently, in the league.

According to Pro Football Focus, he leads all safeties with 16 missed tackles, split evenly between the passing game and the running game. His tackling efficiency ranks 64th among 67 eligible safeties in their data, which, suffice it to say, is pretty awful.

On the opening defensive drive, he blew up a second-down screen pass for a loss of a yard to force an early third and long, and then several plays later ended the drive with the aforementioned interception. That was about as good as it would get.

Late in the game, during the final 20 minutes, he recorded two separate unnecessary roughness penalties that helped the Ravens convert drives into touchdowns. On the first drive, he shoved the running back hard out of bounds at the end of a 21-yard run that drew a penalty, which tacked on another 15 yards, putting them on the Steelers’ 37.

Later on, during a two-point game, after a 40-yard kick return out to the 44-yard line, Davis was flagged again for unnecessary roughness on an incomplete pass that put the Ravens on the Steelers’ 41-yard line. He later recorded two tackles on the drive on plays that were successful runs for the offense, one of which came right before he missed a tackle on a nine-yard touchdown run.

It was an ugly enough performance that there was unrest among the natives, who weighed the reasonableness of benching him in favor of Robert Golden, who was the only other safety they dressed aside from Mike Mitchell. He clearly needs a mental reset ahead of the next game.

On the season, Davis now has 75 tackles with two interceptions and a forced fumble during his first full season as a starter. Some of it has been pretty; much of it has not. Last night was a bit of the former and a bunch of the latter, at least upon first blush. He certainly can’t play that way next week.