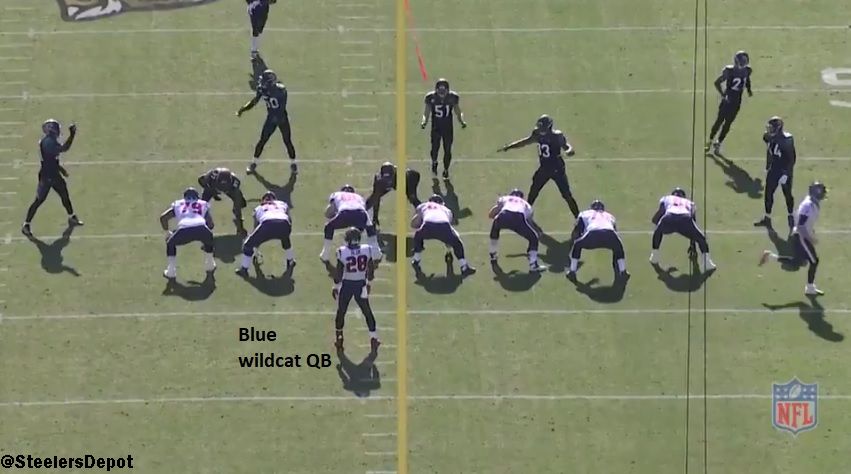 When he was signed last year, I had high hopes for Lamar Miller. He’s been a workhorse but mostly a plodder behind a sub-par offensive line. He’s averaging just 3.6 YPC and a long of 21 yards on 220 carries. D’onta Foreman had a couple impressive performances but tore his Achilles weeks ago (he is one of 18 players on IR). Alfred Blue will be his backup.

They have 33 rushes of 10+ yards and five of 20+. Both are in the bottom third of the league and their 4.0 YPC as a team is slightly below average. The run game is nothing to be intimidated by as long as the Steelers tackle well and don’t beat themselves.

We gotta talk about the Texans offensive line. Not for the starting five, which is pretty bland, but for the extra big boys who come in. The Texans will legitimately use seven offensive linemen for several plays a game, taking the modern approach of 6th OL and putting it on steroids. They’ll run and pass out of it, going max protect to look for some vertical shots. 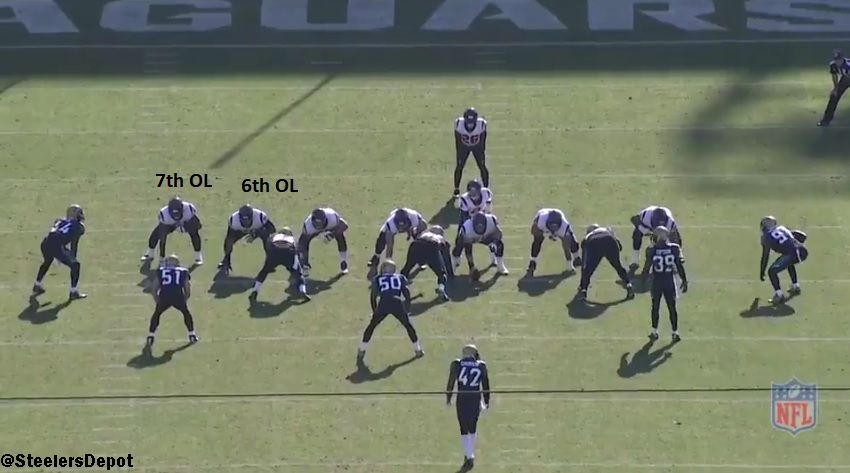 In the run game, you get a mix. Some inside zone, some power wit the LG pulling. Jay Prosch is the FB, #45. He’s used sparingly.

Couple other stats. One big reason why they’ve struggled so much is turnover ratio. It’s -9, tied for 27th worst. Their red zone offense is only slightly more effective, 24th at a touch over 50%. Also 23rd on third downs so situationally, these offense is really ugly.

Last note on them. They will use a Wildcat formation with Blue as the QB. Saw it on 1st and 10 and 2nd and 6 with the ball in Texan territory.

T.J. Yates will get the nod, coming out of the bullpen following injuries to Deshaun Watson and Tom Savage. It’s been a mixed bag. An ok outing against the 49ers two weeks ago, awful against the Jaguars. He’s obviously not a huge concern.

Bigger concerns are their receivers. DeAndre Hopkins is easily a top five receiver in the NFL and the Texans treat him as such. He’s leading the league with 92 receptions going into this week, averaging a solid 14.3 yards per catch and 12 touchdowns, which also leads the league. All 12 of those scores have come within the red zone and his 28 targets are tied for 5th most.

Will Fuller is opposite. A track star, he is nearly averaging 16 yards a grab. The Texans have have 51 receptions of 20+ yards, top ten in the NFL. Perhaps a lack of good QB play is tamping down the 40+ yard receptions, where they rank in the bottom half.

Bruce Ellington has been a pleasant surprise but couldn’t avoid injured reserve. Braxton Miller continues to disappoint and hasn’t been hauled in a pass in two weeks. Their leading TE has only 24 receptions while Miller is a checkdown option out of the backfield but second on the team in receptions. Hopkins has 92, Miller 35.

They’ve been sacked 45 times, 4th most in the NFL. Steelers should be able to get after these guys.

Like I wrote yesterday, it’s a Bill O’Brien coached team so you’re going to see a lot of empty sets. Spread the field out and make it harder to disguise blitzes/coverages.

They do everything they can to get Hopkins the ball. Iso X receiver with a tight split? Backshoulder throw is coming.

3rd down and they need a play? Hopkins in the slot running an angle/Texas route.

Like the Patriots, they’ll also use a Pin/Mills concept (post + dig) deep downfield to get the safety in conflict. Yates struggles to drive the football but on paper, it looks good.

For a second straight year we get to watch the Pittsburgh Steelers on Christmas Day. It’s hard to find a better Christmas present than that, honestly.

This year, the Steelers will travel to Houston to take on the limping Texans at NRG Stadium.

Back when the season started, this Christmas Day matchup looked like a possible playoff-seeding showdown. Instead, we’re left with a decimated Texans team that is honestly boring to watch (aside from DeAndre Hopkins; more on him later) with nothing to play for.

Head Coach Bill O’Brien truly is an offensive genius, but even he can only do so much with a depleted roster like the one the Texans are dealing with. Don’t believe me?  Houston has 18 players on injured reserve, including 11 offensive players.

Once star rookie Deshaun Watson went down with a torn ACL in practice, Tom Savage was expected to keep the Texans at least afloat, but he has dealt with concussions throughout the season and is done for the year.

In steps veteran backup T.J. Yates, who has plenty of starting experience but is short on talent, at least in terms of being a starting-caliber quarterback in the NFL.

In limited action this season, Yates has thrown for just 303 yards on 57 attempts, but he does have 3 touchdowns and 1 pick on the season.

Part of the reason the Texans have been able to hang around offensively with teams is the star turn of Hopkins, who has 23 receptions for 309 yards and 3 touchdowns with the likes of Yates and Savage throwing him the football in the last three weeks.

He does it a myriad of ways too. Hopkins can beat you across the middle, make the ridiculous catches along the sideline and rock you to sleep before exploding deep. He’s quickly put himself into the top-receiver-in-the-league discussion this season.

Hopkins has incredible body control and knows where he’s at on the field at all times. He’s a lot bigger and bit stronger than Antonio Brown, but they’re very similar when it comes to body control and the ability to make catches like this on the sideline.

When not tapping his toes along the sideline, Hopkins is a technician as a route runner, allowing him to create separation on any route that he wants to run.

Yes, Hopkins comes off the line slowly with long strides, allowing him to eat up yardage quickly between himself and the 49ers’ cornerback, but what he does at the top of his route is key.

Once he’s even with the 49ers’ cornerback, Hopkins explodes towards the post, allowing himself to create enough separation on the route while working into the throwing window for Yates to fire a strike to him for the score right before the half.

As I said, he’ll rock you to sleep before blowing past you. He’s got all the tools.

One last one from Hopkins, and it might have been his best catch against the 49ers, which was a game he hauled in 11 passes for 149 yards and 2 touchdowns in.

This is a simple corner strike route from Hopkins, who gets a free release off the line against zone coverage and eats it up. Streaking through San Francisco’s zone coverage, Hopkins breaks towards the corner, allowing Yates to drop a beautiful pass in for the score.

While the throw is great, the catch by Hopkins is better. The star receiver slides, gets both knees down in bounds and secures the football. He’s a terrific receiver.

Outside of Hopkins on offense, the Texans don’t have much to be worried about. Earlier in the year second-year receiver Will Fuller IV was a matchup nightmare, constantly getting deep for touchdowns from Watson, but once Watson got hurt, Fuller’s usage has dropped dramatically.

Fuller has just eight catches in his last two games, with his longest catch going for 15 yards. Maybe that changes on Christmas Day, but with Yates calling signals, I doubt it.

Slot receivers Braxton Miller and Chris Thompson have yet to really make much of an impact offensively for the Texans, but O’Brien will try and get Miller involved on gadget plays.

At running back, Houston has a strong trio, but behind a decimated offensive line they aren’t really able to showcase their talents.

Lamar Miller is the lead back, but since the bye in Week 7, Miller has had more than 21 carries just once and doesn’t have a 100-yard rushing game all season.

Alfred Blue brings a bit more physicality to the field behind Miller and got a lot of work in Week 15 against the Jacksonville Jaguars in a blowout. That could happen again on Christmas Day.

Up front, the Texans will line up like this, left to right:  Julian Davenport, Xavier Su’a-Filo, Greg Mancz, Jeff Allen and Breno Giacomini.

There’s nothing really inspiring there without left tackle Duane Brown (traded to Seahawks) and center Nick Martin lost for the season (broken leg).  Allen has been solid despite moving all over the place, while Giacomini has teamed with Allen to form a solid right side of the line. There are just too many holes up front for this unit to be able to establish a consistent run game and protect the passer.

Tight end Stephen Anderson struggles with drops and isn’t much of a blocker, while Ryan Malleck serves as the backup after CJ Fiedorowicz was lost for the season — and possibly his career — with yet another concussion.

Anderson can do damage in the middle of the field, but like I said, catching the ball consistently is an issue.

On special teams, the Texans are mostly solid, thanks to a strong kicker and punter tandem and some big-play returns on kicks and punts.

Kicker Ka’imi Fairbairn has a big leg, but he has missed five field goals on the year, as well as a number of extra points. Against the 49ers, Fairbairn drilled a career-long 55-yarder that would have been good from 65 yards. He’s very comfortable kicking at home.

Grizzled veteran Shane Lechler continues to kick the crap out of the ball, averaging 48.9 yards per punt on 81 punts this season. He has just 5 touchbacks on the year and has dropped 28 punts inside the opponent’s 20-yard line. At 41 years old, that’s impressive.

Thompson, who has a long of 42 yards on the season, handles kick return duties, while punt return duties are split between Fuller, Thompson and DeAndrew White.

White was explosive at the University of Alabama a few years ago, but he’s never been able to get it going consistently in the NFL.

While the Texans are banged up, this isn’t a team to overlook. They play well at home and are a tough out still on defense.  Offensively, if they can establish the run early, they’ll be able to keep it close against the Steelers.