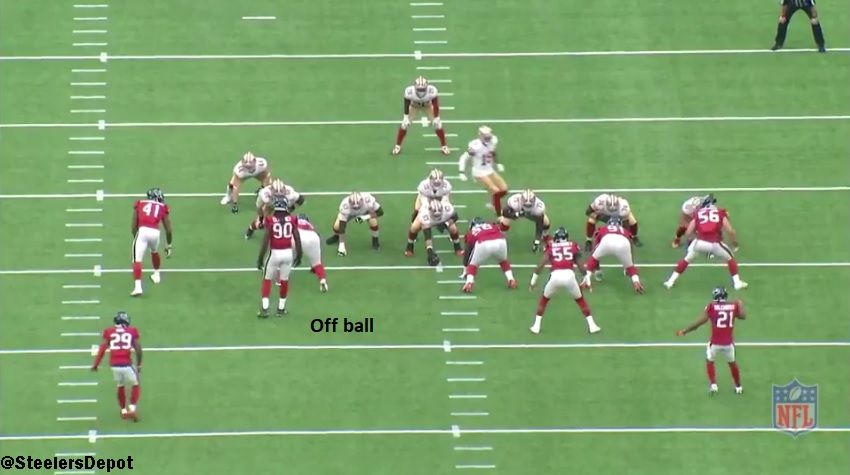 Taking a second look at the Houston Texans’ defense.

They’re only allowing 4 yards per carry as part of their run defense, a top ten number, but some of the specific numbers look ugly. A Simpson’s paradox of sorts. They’ve allowed 41 runs of 10+ yards, tied for the 11th most, and the 12 runs of 20+ are tied for the fourth most in the league. They’ve also given up 11 rushing touchdowns, which is about middle of the pack.

It’s a 3-4 defense but can present some hybrid looks with its versatile edge players. Up front usually has Carlos Watkins, Brandon Dunn, and impressive DE D.J. Reader. But Reader went on IR last week. Jeff Heath and Angelo Blackson should see an increased role.

Outside linebackers are fluid but you’ll generally see Jadeveon Clowney and Zach Cunningham. Benardrick McKinney and Brian Cushing at ILB. But these are all movable parts, especially Clowney, the top talent on this defense. They’ll move him all around. Either OLB spot, hand up, hand down, off ball. If he’s lining up inside, expect Cushing to switch with him. But you gotta find #90 on each snap. He’s the biggest threat off the edge but his hand use makes him a force on the inside, too. 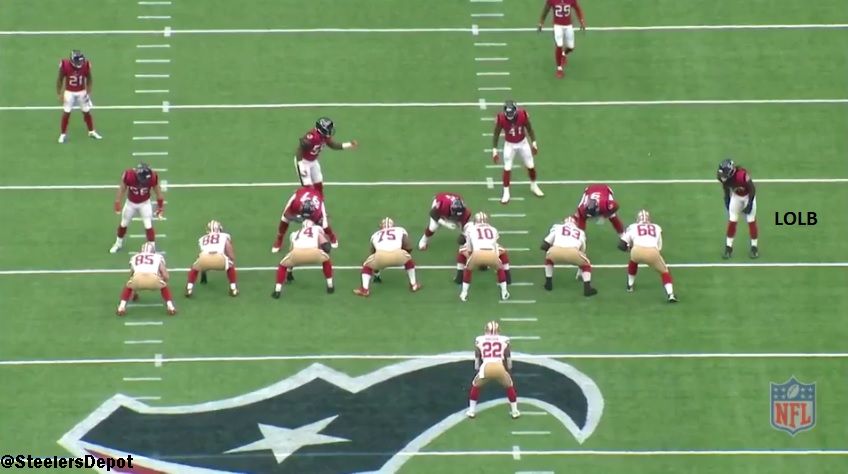 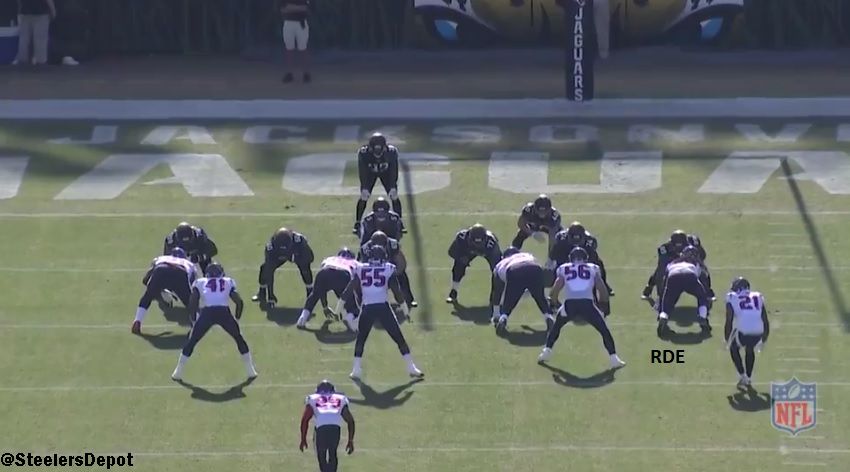 They’ll run an 4-3 similar to the Steelers, too, though they don’t cock the NT the way Pittsburgh does.

They have 31 sacks this season, tied for 20th in the NFL. Not a pretty number. Clowney leads the group with nine. Five of those sacks comes from the secondary.

Couple other stats to throw out. Their red zone defense is equally bad as Pittsburgh, 60% and tied with them for 24th. They make up for it with a strong third down defense, 5th place at 33%.

They have 11 interceptions, five from safeties and four from corners.

At left corner is former Bengal Jonathan Joseph. Opposite is Kareem Jackson, one of the best run-stuffing corners with 66 total tackles with 19 of those versus the run. He’ll kick inside to the nickel spot in sub-packages with Kevin Johnson, #30, taking over at RCB.

Safety contains #29 Andre Hal and #21 Marcus Gilchrist. #35 Eddie Pleasant is their dime defender and often lines up in the box.

You’ll get a lot of Cover 2 from the Texans on early downs. They’ll man up in some more critical situations. I’ll write about this in a separate article but slant/flat and mesh concepts is one of the best way to beat these guys.

Some inverted stuff too to throw you off. Here’s inverted Cover 2 with the safety coming down as the middle hole player and the RCB taking deep half. Nickel corner has the flat. Well-designed. 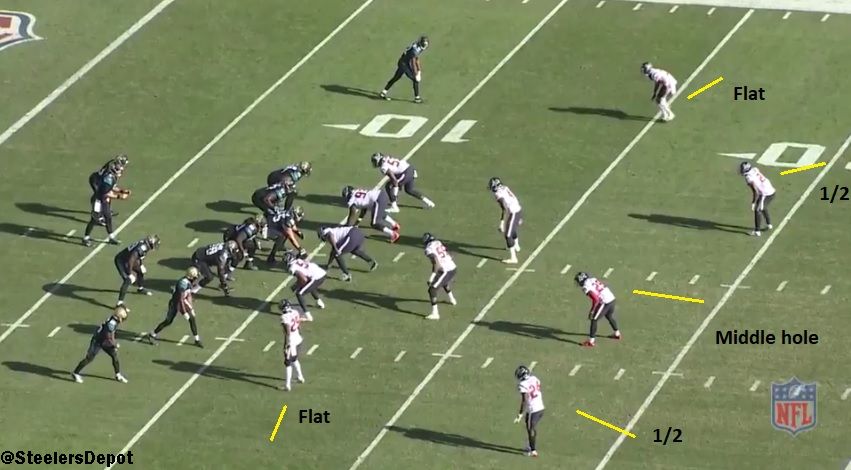 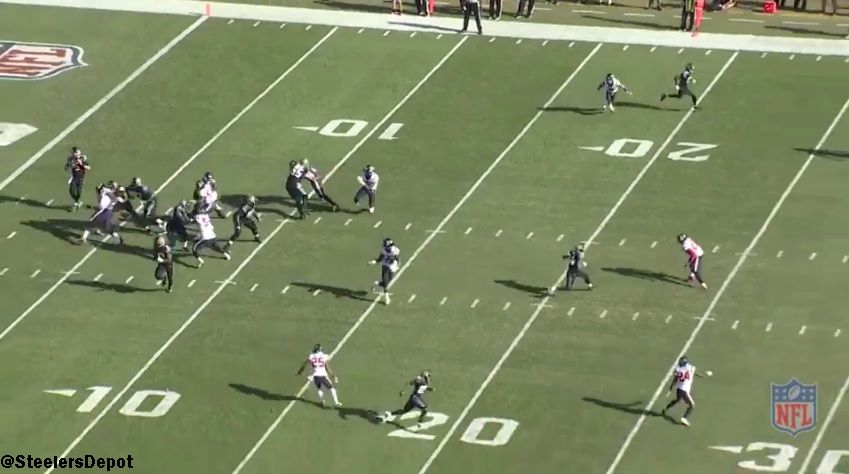 And they’ll get blitz happy too. They’ll sugar the A gaps with linebackers and dime defenders and bring safeties/nickel corners. Even in two minute drills. Texans went stir-crazy with their blitzes in the final two minutes versus the Jacksonville Jaguars, sending three DB blitzes in a row. Two examples.

This is one of the healthiest defenses the Steelers have faced all season, starting with the defensive line.

Joel Heath and Carlos Watkins are the defensive ends in this 3-4 group.  Brandon Dunn is the nose. D.J. Reader will see significant time as well, he may even get the start over Dunn. He and Dunn can be huge threats to the run game, it’s very hard to get a push at the line when those two are lined up on the interior. Dunn isn’t much of a threat as a pass rusher.

Watkins is a high-effort guy who can definitely push the pocket. Can be a productive pass rusher as well using his bull rush to penetrate the pocket. Gives up leverage to o-lineman, though which puts him in vulnerable spots. He’s a rookie, so still lots to develop there, but he’s been a quality member of this line. He’s a very big guy at 6’4” 312. Heath is another young player coming into his own. He uses his hands well at the point of attack, and rarely gets overpowered. And yet another hustle guy on this defense.

This is certainly a tough unit to run against. They’re top ten in the league in terms of average rushing yards per game (106.9) and average yards per carry (4.0).

Aside from LaTroy Lewis, this is another healthy group. Inside backers are Zach Cunningham, and Benardrick McKinney. Veteran Brian Cushing is the sam and Jadeveon Clowney round out the outside. Cunningham is a very promising rookie who’s crazy athletic. He’s very good in coverage, and has unusual speed even for today’s linebackers. He can run down the backs sideline to sideline and is very good in space. High motor, great length, and not afraid to take on blocks. But his productivity in traffic can be limited. McKinney can play in a variety of spots on the field, very powerful and solid in traffic. They’re a good, young duo on the inside.

Not much to be said about Brian Cushing that hasn’t already been said. He’s an effective force coming off the edge, and has an incredible motor. He never takes plays off. He and Jadeveon Clowney are going to be huge tests for both Alejandro Villanueva and Marcus Gilbert. Moving to Clowney, though. This guy is simply unreal. His athleticism is second to none, and his physical gifts, length, lend to a highly efficient pass rush. He lines up everyone, with his hand down, upright off the edge, or even on the inside. Here’s an example of what makes him so effective no matter where he lines up. 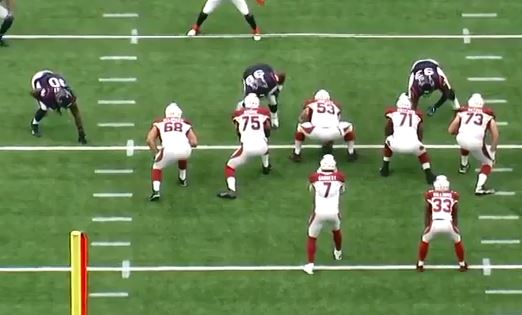 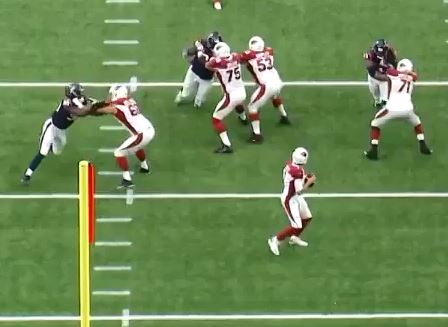 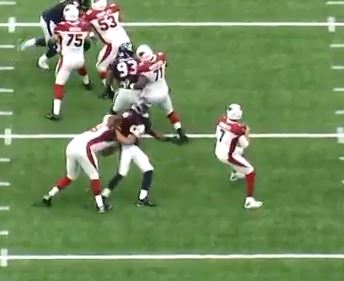 Here the tackle attacks the shoulder pads, and  Clowney matches that engaging him high chest level. You can say Clowney positions his arms on top of the tackles, giving him the perfect opportunity for a rip inside. This forces a hold by the tackle and at that point Clowney is too far inside the pocket for it to matter. It’s an easy sack, his second of the game. His burst off the snap, combined with his arm length and athleticism is the ideal recipe for an edge rusher. He has all the tools.

In the defensive backfield are cornerbacks Jonathan Joseph, Kevin Johnson, and Kareem Jackson. Jackson will line up in the slot in nickel/sub-packages, whereas Johnson will cover the outside. All three are on the field quite a bit. Marcus Gilchrist is the strong safety, and Andre Hal comes in as the free safety.

Gilchrist is highly involved in the run game, he’ll hover around the line of scrimmage very often. Hal is solid in coverage, is good man-up, and has the speed to match.

Jonathan Joseph has been producing for several years now and he has been the epitome of consistency. He’s only missed seven games in the last seven seasons, and his numbers are very similar. What separates Joseph from most is his ability to get a hand on the ball. He racks up double digit pass defenses almost every season (22 in 2015), so he doesn’t often leave room for a spectacular catch. Check out this play below versus the 49ers.

Louis Murphy is going to fake the slant and run an out route at the goal line as the 49ers are knocking on the door. Joseph, as he often does, lines up about 5 yards from Murphy. His hip movement is impressive, as he never appears to break stride. He shadows Murphy on the slant and once Murphy plants, Joseph shifts his hips and attacks the angle right to the ball, diving and batting it away. In his 12th season, Joseph shows us here why he’s still one of the best in the league. Still has the closing speed needed to play his style, and has a great eye for the ball and is able to sniff out those fakes.