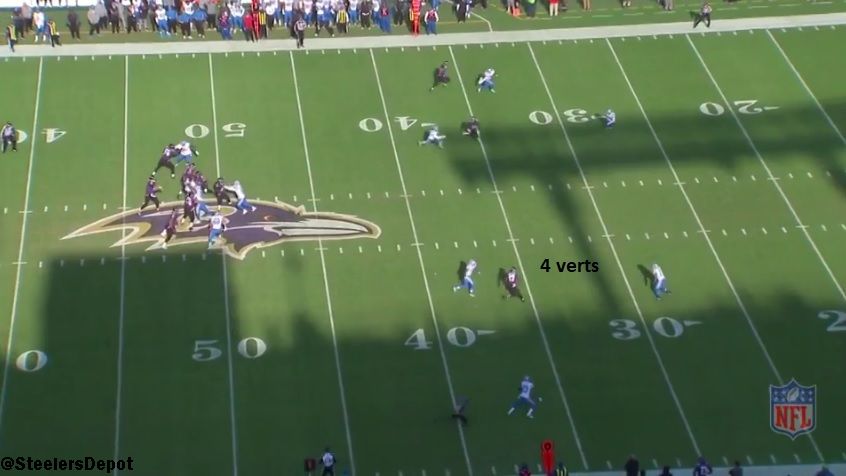 It’s been a surprisingly stable part of their offense. Especially with Alex Collins, a supremely underrated player who should be good to go this week (he was dealing with some migraines). Burst, power, and vision, he meshes well with their zone scheme. Collins is averaging 4.9 YPC, fourth in the NFL of any back with at least 1000 carries. The one downside have been fumbles. He’s got two of them.

Buck Allen is the backup. Good out of the backfield but not nearly as accomplished a runner. Plodder type averaging 3.5 YPC. Danny Woodhead is back after missing the first matchup. He has 11 receptions over the last three games.

They have 37 runs of 10+ yards, a little above average, and a little below of 20+ yard runs. They have seven of those.

Run scheme is similar. Inside zone/outside zone, the latter of which gives the Steelers trouble. Do it out of single or two back. Sometimes it’s TE Maxx Williams in the backfield, sometimes it’s #42 Patrick Rickard. But they mix in more power these days too. Some “short pulls” where the 3T gets trapped and some long ones where the EMOL gets kicked out. Example of the former.

Led by the immortal Joe Flacco. Average is being kind to his season. Completion percentage is fine, 65%, but he has a 1:1 TD/INT ratio, 11 each, and his 5.5 YPA is dead last in the league by a considerable margin. He’s been sacked 23 times.

Mike Wallace is still Mike Wallace. Better after a dreadful start. Averaging over 14 yards per catch while Jeremy Maclin is the man on third down. Only a 10.9 average but leads the team with 12 receptions and 24 targets. Neither are the Ravens’ leading receiver. That goes to TE Ben Watson, who has 45 receptions. Buck Allen is second with 42.

They are not an explosive offense. 18 completions of 20+ yards – that’s last in the NFL. Only four of 40+, though they hit one last week, but it’s still 21st overall. The one stat that sticks out for them as an overall team figure is their turnover ratio. +14, by far the best.

Like the Bengals, the Ravens will stretch you vertically. Four verts and if you don’t match up they’ll hit #2 down the middle of the field.

Also like Cincy, they’ll run an over route out of a reduced split or twins set. Great way to beat Cover 3.

And if you line up single high and Mike Wallace is the backside “X” receiver, Flacco is throwing him a go-ball. Just a heads up.

Now that we’re in Year 10 of the Joe Flacco Experience in Baltimore, it’s easy to grasp just what the Ravens’ offense is about. With Flacco under center, this is an offense that lacks gusto, yet somehow can do just enough to win at least 8 games a season.

This year, it’s much of the same with Flacco, who has steadily fallen off each and every year since his magical Super Bowl run all those years ago. As his mobility in and out of the pocket has declined rapidly, so too has Flacco’s level of play, which has now rendered him as one of the low level quarterbacks in all of football.

Flacco truly lives up to his nickname – Checkdown Joe – far too often despite having a very strong arm. Too often, Flacco is content with just dumping it off to backs out of the backfield or tight ends in the short flat.

When he does try to dial it up, Flacco’s accuracy on deep balls is woeful. Despite having speedsters Mike Wallace and Chris Moore at his disposal, Flacco can rarely connect with the duo on deep balls, which causes the offense to be stagnant at times.

However, when Flacco is able to dial it up and connect, it gives the Ravens’ offense a jolt while also opening up space in the box for an improving run game.

Lining up out of a two-tight end set early in the second quarter against the Detroit Lions in the Week 13 matchup in Baltimore, Flacco and the Ravens were able to record the longest passing play and offensive play of the season as the veteran quarterback worked off the play-action fake to find Wallace behind the Lions’ defense for a 66-yard gain.

This is one of the few deep balls I’ve seen Flacco really drop into the basket in stride of a receiver running deep. He still has the strong arm, but as I said, the accuracy has fallen off. That being said, Flacco did turn his best performance of the season last week against the Lions, passing for 268 yards and two scores on 23-of-36 passing.

Aside from Flacco at quarterback, the real strength of this Baltimore offense is a strong backfield and a consistent running game, highlighted by young running back Alex Collins, who has emerged as a true No. 1 back in the NFL.

After coming to Baltimore from Seattle following a cut by the Seahawks, Collins is closing in on his first career 1,000-yard season, sitting at 705 rushing yards and four touchdowns on the year. All four touchdowns have come in the last four weeks, including two last week in the 44-20 win over the Lions.

Averaging 4.9 yards per carry on the year, Collins runs with power and has added some speed to his game after dropping some weight following his time at Arkansas.

Finally getting a chance, Collins has really emerged as a good back for an offense to build around.

What has really impressed me with Collins is his vision and speed, which he shows off right here on his first touchdown against the Lions. He’s not a burner or a true scat back, but Collins will catch you off guard with his speed.

As Collins has heated up this season, so too has the Ravens’ ground game. While they will line up and hit you in the mouth, they are open to scheming deceptive plays to bust off big runs, like they did on Monday Night Football in Week 12 against the Houston Texans.

Here on fourth and short, the Ravens scheme up a fake fullback dive to Javorius Allen, allowing Flacco to flip it to Collins sprinting right into open field for a splash run, setting up a touchdown for Collins one play later.

Along with Collins in the ground game, Allen and scat back Danny Woodhead have provided the Ravens with a deep, balance backfield to work with. This is easily the most underrated position group on this team. They aren’t big in name, but they’re big in production week after week.

At receiver and tight end, the Ravens are thin after a number of injuries decimated the offensive attack, but over the last few weeks Wallace has caught fire, putting up receiving totals of 56, 48 and 116 yards over the last three weeks, providing Baltimore with a threat to take the top off of defenses, opening up underneath routes for Flacco to exploit.

Opposite Wallace, Jeremy Maclin has been a disappointment this season, as had Breshad Perriman. Moore has emerged as a tough cover out of the slot thanks to his speed and route running ability, but overall this is a very thin receiving corps, which has played a factor in Flacco’s demise over the last few years.

Tight ends Benjamin Watson, Nick Boyle and Maxx Williams are quietly putting together solid seasons in Baltimore as Watson and Boyle serve as the receiving options for Flacco, while Williams has improved as a blocker throughout the season, resulting in the run game improving as the season has progressed.

Speaking of the run game, a lot of credit needs to be given to a decimated offensive line playing without the best guard in football in Marshal Yanda.

Stanley has played very well this season, as has Jensen when not having to block Jadaveon Clowney. Hurst is a good run blocker at left guard, but in pass protection he struggles. Skura and Howard have been hit or miss on the right side of the line.

Much like we know all about the offense under Flacco, the special teams units under Jerry Rosburg continues to be an elite unit season-after-season, highlighted by kicker Justin Tucker and punter Sam Koch.

Rosburg is not afraid to call for well-timed fakes thanks to Koch’s ability to throw the ball, and with Tucker, head coach John Harbaugh feels comfortable rolling out No. 9 from anywhere inside of the midfield marker.

Tucker is 26-for-29 on the year while drilling all 26 extra points he’s attempted. He’s as steady as they come, giving the Ravens a scoring weapon that most teams don’t have. With Koch, he’s one of the best punters in football, consistently flipping the field, putting the Ravens’ defense in advantageous spots to work with against opposing offenses.

Both Tucker and Koch make it easy for Harbaugh to make special teams calls throughout the game.

Punt returner Michael Campanaro and Moore at kick returner aren’t flashy and won’t bust open games as of now, but both have a history of splash plays in their respective roles over their careers. They’re ones to be careful with.