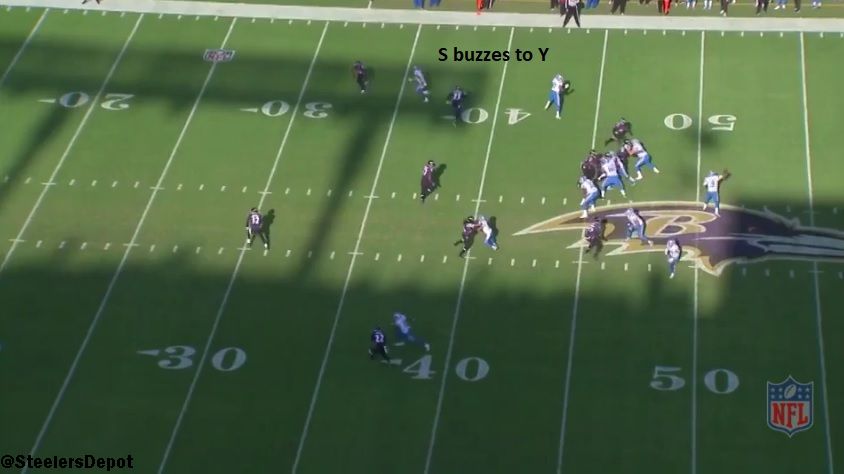 Taking a second look at the Baltimore Ravens’ defense.

The front seven, much like the entire defense, is stout The run defense is excellent like always. Allowing only 3.9 YPC, tied for the 8th best in the NFL. They’ve allowed just 29 runs of 10+ yards, 6th best in the league. While they have given up some chunk plays, 11 of 20+, much of that came when the team was without NT Brandon Williams. He’s back and the Ravens have allowed only two such runs over the last month. So yeah, you’re not gashing them.

Up front are some big boys. Williams, who has played more three tech because of Michael Pierce, a second year UDFA who is the definition of a true plugger. One of the best run stuffers in the NFL. Elsewhere, there’s Carl Davis at LDE. Willie Henry logs time, often in sub-packages to replace the immobile Pierce.

Terrell Suggs/Za’Darius Smith start at OLB. Matthew Judon, Tim Williams, and Tyus Bowser all rotate in. ILB is more settled than the last time the Steelers played them. Still C.J. Mosley, their leading tackler, who has more solo tackles (72) than the next Raven has combined (65). Patrick Onwuasor has seen consistent playtime and done a nice job. I did see Bowser replace him in some obvious pass situations.

Baltimore is tied 7th in the NFL with 33 sacks. 22 from linebackers, a whopping seven from DBs, and four from the DL. Suggs leads the pack with 10.5, three over the past two weeks. Two other stats. Excellent third down defense (34%, 5th best) and a top ten red zone D, clocking in at 46.9%.

The loss of Jimmy Smith, done for the year, stings, but they have the talent to replace him. Brandon Carr at LCB, rookie Marlon Humphrey RCB, Maurice Canaday in the nickel. Strong safety duo. Eric Weddle and Tony Jefferson.

As a team, they have an insane 20 interceptions, four more than second place. 17 from the secondary and three by the linebackers (Mosley has two). Other pass defense stats are strong. 59.1% completion rate (tied 5th), 6.7 YPA is top ten, and the 12 passing TDs given up is tied for the third best figure in the league.

What you get from Baltimore now is what you’ve always gotten from then. Cover 2/Cover 3 on early downs and Cover 1 on third and short/medium. They’ll buzz one of those safeties down, often Jefferson, to rob crossers or read and pick off the QB.

They run an amoeba defense on third down. 1-4-6 looks. Anthony Levine, #41, comes in as that dime defense. Tons of pressure looks off it and they’re not afraid to bring the heat. One example, a game-clinching pick six off a nickel blitz.

This group is fully healthy and extremely dangerous, particularly in the run game. Brandon Williams is their top guy; he can play all along the line, but usually is seen as a 0 or 1-tech lineman. Willie Henry, Michael Pierce, and Carl Davis rotate in depending on what package they’re in. Henry typically gets the nod when they roll out two defensive linemen (Williams being the other).

These guys are huge and all are capable of blowing a play up in the backfield. Williams also has a high motor, and will run down backs along the edges, which is very impressive for a veteran defensive tackle. Pierce is a very promising young player in his second season. This guy constantly gets after it. He leads the unit with 40 tackles so far this season; it appears he’s involved on almost every play.

This linebacker corps may look a whole lot different Sunday night than what many are used to, given injuries to both C.J. Mosley and Za’Darius Smith. Mosely has not participated in practice, dealing with both an ankle and now a neck injury. Smith did not practice due to a shoulder injury. If the two cannot go on Sunday, then Kamalei Correa will take over as the Mike, and rookie Tim Williams will step up in Smith’s place. Patrick Onwuasor is the will.

The edge rushers are, of course, Terrell Suggs. Not much of an introduction needed there. And the other would be Smith, but expect to see Williams backing up Suggs instead.

Second year player Matt Judon is the Sam who has been lights out for the Ravens this season. He’s simply a playmaker notching 6 sacks, a forced fumble, a fumble recovery, 43 tackles and 2 pass deflections. Here’s an example of his impact as a pass rusher.

Body strength is impressive, as he pauses before driving into the tackle going high pad level. Using his inside hand, he swings the tackle and uses a deadly swim move to cut inside. The rest is history, it’s an easy sack. And he leaves the tackle completely turned around. Chris Hubbard is going to be heavily tested in this one.

Even with the loss of Jimmy Smith, this is still a very deep unit and they will use as many of their weapons as possible. Brandon Carr has been their consistent outside corner throughout the year. In to take Smith’s spot will likely be Maurice Canaday, though several will rotate in on the outside. Canaday can play slot as well. The most consistent nickel corner of the group is Ladarius Webb, he’s been in the slot most of the season. But others, such as Malron Humphrey, Anthony Levine, and Chuck Clark will get their reps.

Eric Weddle is the strong safety, and Tony Jeffersonis the free safety. And even though he’s in his 11th season, Weddle is still killing it. And he’s coming off of an AFC defensive player of the week honor, which was certainly well deserved as he strip-sacked Matthew Stafford, and later recorded a pick six. He is, seemingly quietly, having his best season; His five interceptions rank second in the NFL.

Here’s a look at his strip-sack last week versus Detroit. This is something the Ravens like to do often, and that’s sending their defensive backs on an outside blitz. Weddle is very productive in this aspect of the game, he takes a perfect angle and is able to get to Stafford just before he throws. Weddle’s athleticism is still there and for the Steelers to stop some of these outside blitzes, it’s going to take proper communication at the line, and the running backs are going to need to pick them up if they want to avoid a disastrous play.