Taking a second look at the Cleveland Browns’ defense.

It feels like Gregg Williams got bored and is just copying what the Steelers have been doing on defense. A lot of what we’re going to show you is stuff we talk about with Keith Butler’s defense all the time. It starts with their defensive line.

Carl Nassib is the 4i/5T, Danny Shelton the nose, and #93 Trevor Coley, who aligns to the strongside as the three technique (between guard and tackle). It looks like this, just like it does when Pittsburgh does it, though the Browns do it with more frequency.

Starting on the outside is James Burgess Jr. and Myles Garrett. Inside is the strong duo of Joe Schobert, who broke out this year, and the always steady Christian Kirksey. Combined, those two dudes have combined for 263 total tackles, 132 for Schobert, 131 for Kirksey.

Nate Orchard will sub in at LOLB, though they weirdly will ask him to play as the 4i and with his hand down, which seems like a bad idea.

Larry Ogunjobi is a rookie out of Charlotte who will play the three and stuffs the run really well. Underrated name out there. Believe it or not, this run defense is really good. They’re allowing 3.7 yards per carry, tied tops in the league. They’ve allowed only two 100 yard rushers all season and none for the past month. The Browns have allowed a lot of touchdowns on the ground, but most of it is short-yardage stuff. Pittsburgh average barely over two yards a pop in the first matchup.

The secondary has a lot more problems and the pass rush hasn’t helped. Only 31 sacks this year, six from #1 pick Garrett. Only six interceptions total and four from the secondary (cornerback Jason McCourty owns three of them). Quarterbacks are completing 67.7% of their passes, that’s 2nd best, 7.3 YPA puts the Browns 23rd, and the 27 TDs they’ve allowed is 24th.

Jamar Taylor is the LCB with McCourty opposite. At safety is Jabrill Peppers, who has had an up-and-down season, and a guy I legitimately have never heard of – rookie UDFA Kai Nacua. #39 Justin Currie works out of the slot.

They aren’t getting gashed like last year. In 2016, they gave up 12 passes of 40+. This year, it’s only six. But they don’t make nearly enough splash plays either and with a sub-par third down defense too, 24th in the league. There is a little more talent this year, at least to start, as compared to season’s pass, and Williams is a better DC than Jim O’Neil.

Coverage wise, you’ll get a lot of Cover 2 and Cover 3. They’re a pretty blitz heavy team with all the hallmarks of what LeBeau/Butler did. Here’s their SAM Fire Zone.

And here’s a Fire X.

I think playaction, seldom used by the Steelers this year, is a big key in this one. Browns are an aggressive bunch and I’ve seen playfakes get them pretty good. Hoping to see a season-high of it Sunday.

Will the Browns go 0-16? Almost certainly. But if there’s a group that can cause fits and change the game, it’s their defensive line.

Starting with the rookie defensive end Myles Garrett. Didn’t play the first four weeks of the season, but then exploded onto the scene recording four sacks in his first three games. Since then he’s cooled off in that department (just 2 sacks since). But his combination of power, length and athleticism lends to an extremely high ceiling moving forward. And it also allows for flexibility as he’ll rush from a two-point stance as well. Second year pro Carl Nassib is the other defensive end. We’ll get to him in just a moment.

Interior tackles are Trevon Coley and Danny Shelton. Solid 4-3 tackles. They’ll even stunt every now and then. Nassib will stunt as well.

This is definitely the strongest unit on this defense. Despite their overall terrible play this season, amounting to an 0-15 record, they’ve fared quite well against the run. Now part of this can be due to the fact that many teams can’t help but attack them through the air, but still, this is not an easy front to run against. They’re allowing the seventh fewest yards rushing, and are allowing a mere 3.3 yards per carry. Not bad for 0-15.

Here’s part of the reason why. I know most would likely point to Garrett when talking about this front, and for good reason. He was a first rounder for a reason and has shown huge upside. But no love for Nassib? I think this guy is legit, and someone to be accounted for especially in the run game. Here’s an example from last week at Chicago. 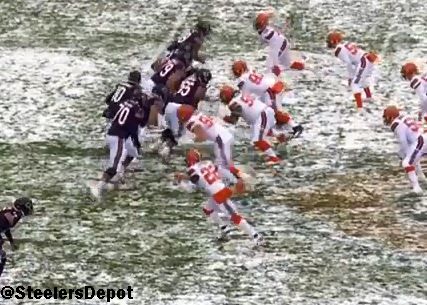 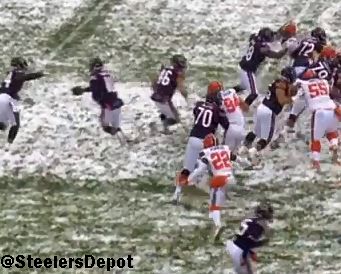 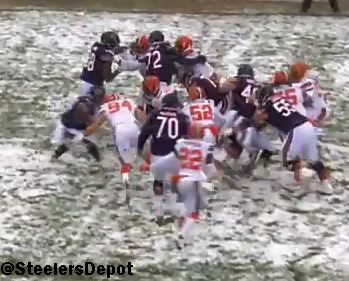 On this play Nassib is the quickest off the ball, which is imperative to him out-leveraging the tackle. HE gains inside leverage and uses great positioning to burst through the lane while maintaining a free hand. There’s no match for this one, Nassib fires through and meets Jordan Howard in the backfield for a loss.

Nassib is one to make these types of plays in the backfield, and is more athletic than maybe he gets credit for. Good at containing, and can run them down to the sideline.

James Burgess is the sam, Joe Schobert is the mike, and Christian Kirksey is the will. It’s a fairly young group with Kirksey being the veteran at four-years experience. Schobert is the physical presence in the middle, clogs up lanes well, strong, and can cover the tight end fairly well. Very good pass rusher as well.t Kirksey is probably the best cover linebacker of the group, quick and good in space. Burgess is very promising, especially as a pass rusher. He’s likely going to be the one blitzing he most out of this group. Ok in space, but can be late to the ball. Makes up for it, though, with his sure tackling and can recover well.

This group is fairly aggressive, but boy do they pay for it. Double digit plays of 40 or more yards given up. Those are game-changing moments and this secondary has had its share of mishaps. But with that comes some promise. That promise comes in the form of Jabril Peppers, the rookie safety. He’s a big, tough safety that flies to the ball. He’s a game-changer for sure, just needs to be on a better team. They employ a group of safeties, with Derrick Kindred being the most consistently used. He’s very good against the run.

Jason McCourty and Jamar Taylor are the outside corners. They use a lot of different guys here as well. Michael Jordan is one who will cover deep thirds as a safety in situational play. Derron Smith, Justin Currie, Briean Boddy-Calhoun rotate in in various situations. They like to blitz their db’s, particularly Peppers and Currie.

Not much else to say. A solid defensive line. And basically middle of the road or worse everywhere else. Let’s just hope they don’t catch the Steelers sleeping.