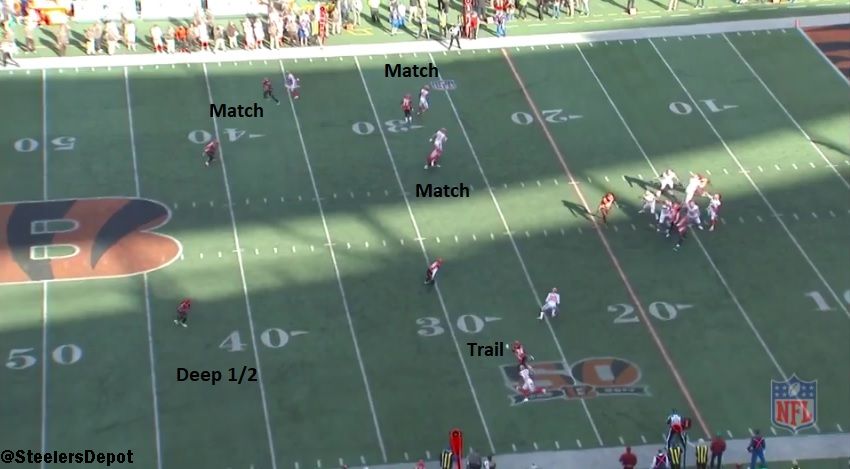 Taking a second look at the Cincinnati Bengals’ defense.

Their front four runs deep, as is the calling card of most 4-3 defenses. Up front brings some familiar faces, some new ones, and some of the former in new spots. You still have Michael Johnson and Carlos Dunlap, two length guys who clog throwing lanes and are tough to block in the run game (Steelers likely to use a lot of Jerald Hawkins this week) and Geno Atkins as the 3 tech.

Andrew Billings (remember him?) and Ryan Glasgow are also part of the interior defensive line. Billings got the start last week as the nose tackle, the plugger, and his role could continue to expand as Pat Sims is phased out (Sims was actually cut for three days in mid-November).

There’s also Chris Smith, who can play inside/out and the other rookies. Jordan Willis and Carl Lawson. Lawson has been on fire, leading the team with 7.5 sacks and a team that is third (right behind Pittsburgh) with 33 on the season. 26.5 of those have come from the FL. Four from the secondary (all cornerbacks).

The depth has allowed them to move guys like Johnson and Dunlap around a little more than they have in the past, when they would just play LDE/RDE all of the time. Here’s Johnson lined up as the 3T. 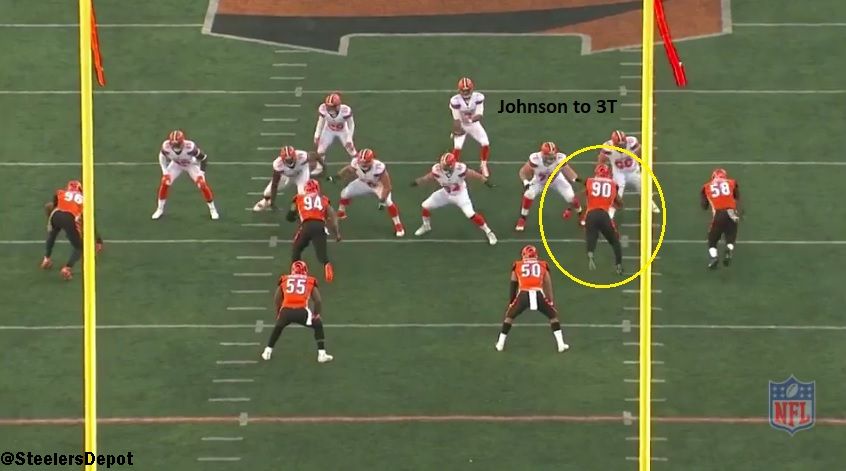 At linebacker, they’re led by Nick Vigil, who leads the team with 79 total tackle, but he’s going to miss the game. Of course, SAM linebacker Vontaze Burfict is still their best of the three. There’s also #50 Jordan Evans on the weakside and Kevin Minter, who replaced Vigil last week, played the MIKE. He’ll get the nod tonight.

More to their run defense. They’re allowing 4.0 YPC, the same as the Steelers, and seven rushing touchdowns. Both middle of the pack. Ditto with their 10+ yard runs (31 of them, squarely 16th) but their safety play has been good. Only five runs of 20+ yards, tied 6th best in the NFL. Not that the Steelers bust those ones off on a regular basis.

Couple other numbers. The Bengals’ red zone defense is the best in the whole NFL, coming in at just 39.5%. And they’re the best at home too, that number lowering to nearly 25%. Their third down defense isn’t nearly as sparkling. Offenses are converting over 43% of the time. For the Bengals, that’s ranked 28th in the NFL.

Dre Kirkpatrick at LCB, Adam Jones at RCB (though William Jackson has cut into his snaps more and more and playing at a high level) with Darqueze Dennard in the slot. George Iloka at FS and either Shawn Williams or Clayton Fejedelm at SS. Williams has missed the week with a hamstring injury so expect Fejedelm to get the nod. (Update: Williams has been ruled out).

A hallmark of the Bengals’ defense is their ability to disguise coverages/pressures. Pre-snap, you get both safeties rolled down near the LOS like it’s going to be a quarters look. Instead, they bail on the snap and it turns into Cover 2. 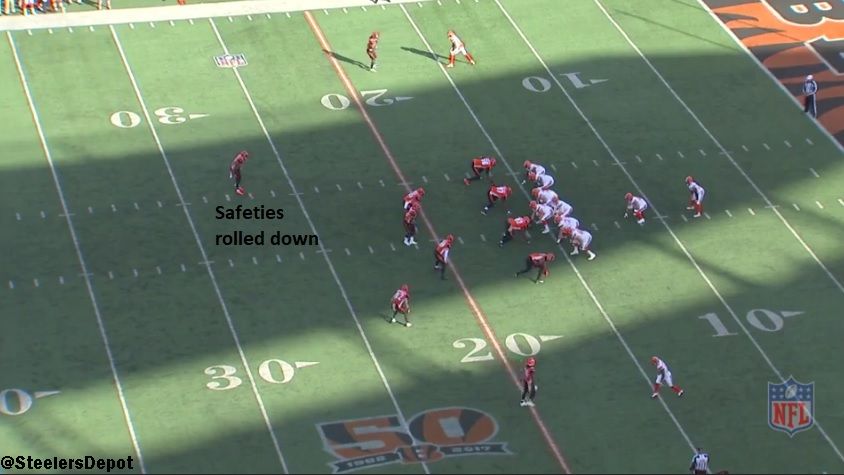 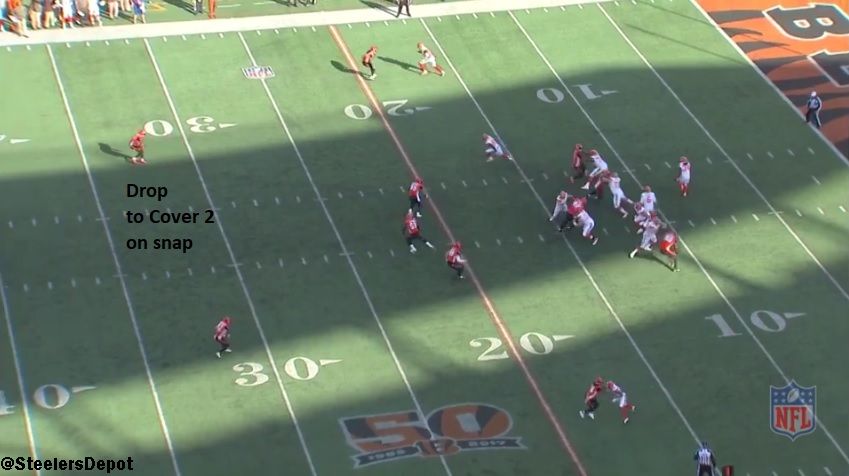 And they’ll play quarters too. Maybe more now than they were in the first meeting. Rolling the safeties down a little closer to the LOS than they have in the past.

They’ll also use combination coverages against trips. Match everything to the trips side and play traditional cover 2 to the “X” weakside receiver. Two examples. 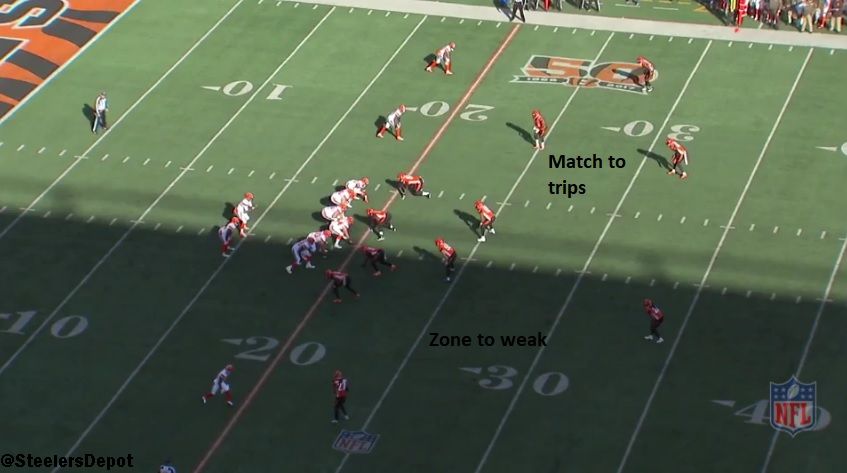 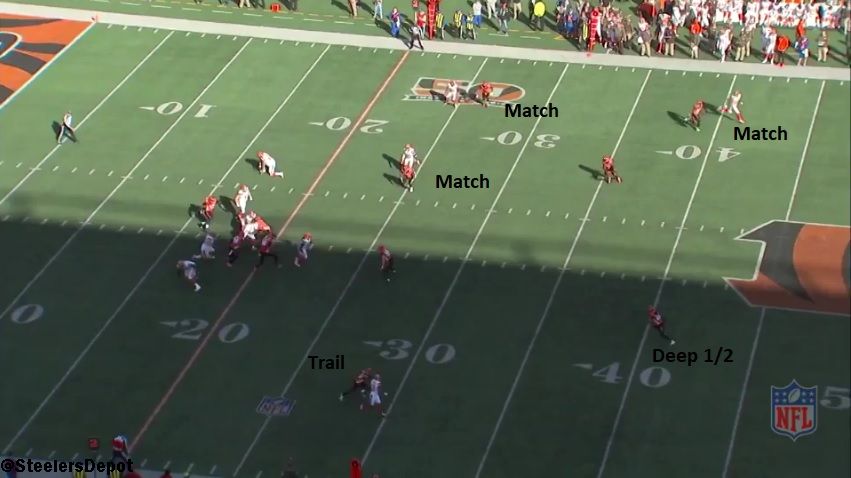 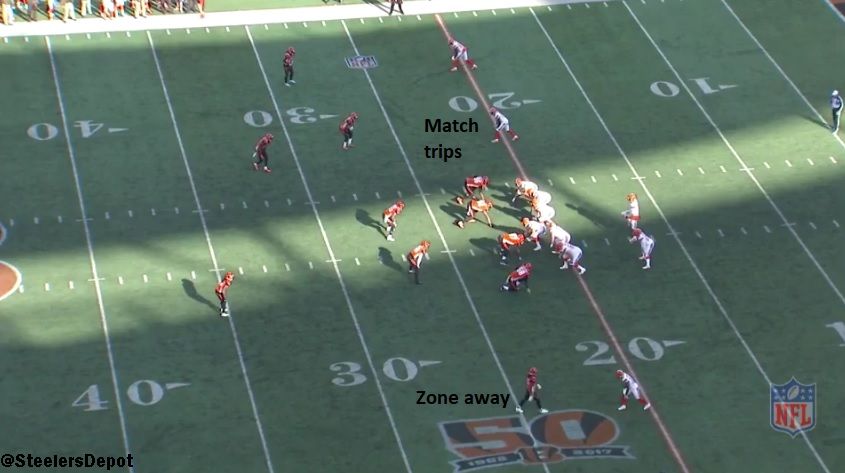 From a pressure standpoint, they’ll bluff the A gaps with both ILBs and then either bring one or drop both out. A popular secondary pressure is a nickel blitz with Dennard, too.

As is expected with this part of the season, the Bengals have some injuries throughout the defensive lineup, but the Steelers should expect to see the same starting four defensive lineman on Monday night: LDE Carlos Dunlap, NT Pat Sims, DT Geno Atkins, and RDE Michael Johnson. Johnson is the only one listed on the injury report (questionable) with a back injury, but it looks like he will be a go.  This is the group that generates the pass rush. As a starting unit, they’ve brought down the quarterback 15 times this season (Sims-.5, Johnson-3, Atkins-7, Dunlap-4.5). Atkins is having one of his best seasons in year 8, and not just because of his sack numbers. Atkins has been in on a ton of tackles at the LOS this year, and he’s just extremely dominant no matter where he lines up.

But let’s talk about one guy in particular that has been very impressive:  that would be rookie Carl Lawson. Lawson has been subbed in for pass-rushing situations most often and he has produced heavily to the tune of 7.5 sacks, leading the team. Check out this play below as he absolutely manhandles Browns left tackle Spencer Drango.

The Bengals are stacking the box and Lawson is lined up in a 5-technique on the outside shoulder of the left tackle. From the snap, Lawson fires up using his inside hand and driving Drango backwards, using great body lean and keeping his outside hand free. Gotta give props to Chris Smith as well for a sick inside spin creating the initial pressure. But Lawson’s ability to gain leverage in most situations makes him very dangerous as a pass-rusher.

He is dynamic, and will provide a big test for Alejandro Villanueva.

Nick Vigil has been ruled out of the contest, so rookie Jordan Evans will likely get the start in relief, especially since Vincent Rey has also been ruled out for the game. That’s the only change in this linebacker corps. Kevin Minter is the mike, and Vontaze Burfict is the will.

Evans is an athletic guy that’s very good at plugging at the gaps and can run sideline to sideline with ease. He’s hard to outrun. But there are areas where he struggles, and it’s just par for the course when you’re talking about a rookie being thrust into the lineup mid-season. While he can make great plays in coverage, he sometimes relies too much on his athleticism and can be caught out of place or just too shallow in his zones. We saw him get beat a couple of times like this in the Cleveland game last week. 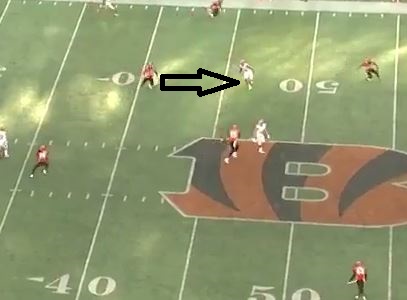 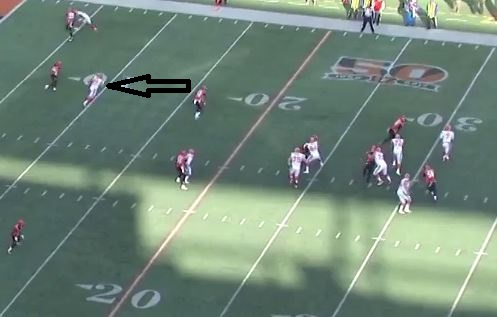 Evans does a good job most times of disguising his coverages pre-snap, but as you can see the Browns took advantage of his positioning in the passing game. These are two examples of Evans lacking depth in his coverage, and subsequently both plays turn into positive yards for the Browns. To be fair, the first play involved a couple issues within the secondary as well, so it’s not all on Evans. But the opportunities over the top are there for the Steelers, especially from the slot and tight end positions.

Strong safety Shawn Williams has also been ruled out of the game, so in steps Clayton Fejedelem, who has played well in sub-packages this season. LCB Dre Kirkpatrick has been a little banged up this season, but is still producing at a high level and will see plenty of Antonio Brown.

Adam Jones is your LCB, and Darqueze Dennard will be in there in nickel formations. As we mentioned earlier this season, the Bengals rotate defensive backs quite often, so that unit will change up often. Free safety is George Iloka. Josh Shaw and William Jackson III will also rotate in. Jackson will largely play outside. The Bengals are 5th in league in pass defense, rarely giving up big plays. Almost all of these db’s share the same traits: they’re very physical, opportunistic, and active in the run game.

They are perhaps the healthiest they’ve been all season, so the Steelers should expect to get their best effort.