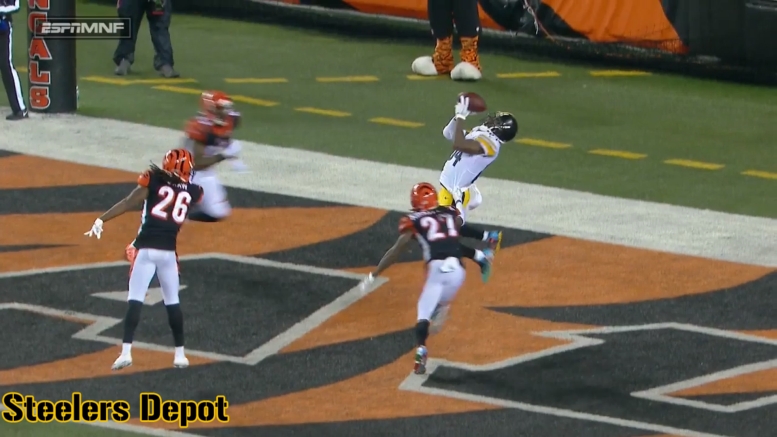 Pittsburgh Steelers quarterback Ben Roethlisberger and wide receiver Antonio Brown certainly have had strong 2017 seasons. However, the play of the duo this season has especially been strong during games when it matters the most.

As you can see in the two infographics posted on Friday by Pro Football Reference, the Roethlisberger to Brown and others connection has thrived this season in the last five minutes of a one-score games.

Here are the QBs with the best passer rating this year in crunch time (last 5:00 of one-score games). Note the substantial gap b/w Aaron Rodgers and the field https://t.co/2NxuFU1ZEX pic.twitter.com/GhV1lwQ96p

Antonio Brown has 224 receiving yards in crunch time (last 5:00 of a one-score game). That’s over 100 more than any other player pic.twitter.com/JIXX4huUwv

Despite only playing in 14 games this season, Brown has managed to register 9 catches for 224 yards in the last five minutes of a one-score games this season and that’s over 100 more than any other player. Those 9 catches by Brown came in seven different games this season and five of them resulted in gains of 23 yards or more. One of those catches, a 51-yard touchdown pass from Roethlisberger, came in the Steelers Week 6 win over the Kansas City Chiefs. One of the other nine catches also resulted in a touchdown and that happened in the Steelers Week 13 win over the Cincinatti Bengals.

As for Roethlisberger’s 110.9 quarterback rating in crunch time, he was 29 of 41 for 431 yards with two touchdowns and an interception in the last five minutes of a one-score games this season. His two touchdown passes went to Brown and his lone interception came late in the Steelers Week 15 loss to the New England Patriots. If you remember, and I know you do, a few plays prior to that interception Roethlisbeger seemingly threw a touchdown pass to tight end Jesse James before it was ultimately overturned via an official review.

Additionally when it comes to Roethlisberger, while his quarterback rating is fourth on the list, his 431 passing yards are nearly 100 more than any other quarterback.

One final note when it comes to these stats from PFR.

Of the seven crunch time catches that Patriots tight end Rob Gronkowski has this season, four of them came against the Steelers a few weeks ago. One of those was his two-point conversion reception while the three others on that touchdown drive totaled 69 yards.

In case you’re curious, the Steelers defense has allowed opposing quarterbacks to complete 20 of 39 pass attempts for 231 yards for no touchdowns and no interceptions in the last five minutes of a one-score games this season.