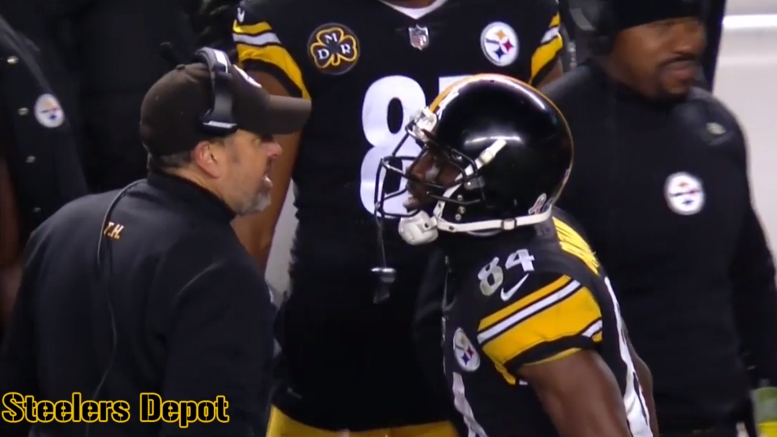 Pittsburgh Steelers wide receiver Antonio Brown had not even missed a week of practice outside of the concussion that he suffered during the Wildcard round of the 2014 playoffs since 2012, but he missed almost all of practice this past week for the team, nursing a toe injury that he shared with the world on social media.

Despite the fact that he was not a participant on the practice field on the final two days, he was given a ‘questionable’ designation in advance of tonight’s game. This evening, we have had a couple of reports rolling in that are trending in a positive direction with respect to the likelihood that he will play.

Mike Florio first reported, at least that I have seen, that he was indeed on the plane with the team as they landed in Cincinnati. According to Gerry Dulac of the Pittsburgh Post-Gazette, the decision as to whether or not he will play will be made at game-time—which of course means roughly 90 minutes prior to kickoff, when the inactive list has to be reported.

Antonio Brown will be game time decision vs Bengals

Neither of these pieces of news are particularly shocking—it’s not as though he was listed as doubtful—but it’s pretty rare that a player does not participate in practice at all at the end of the week and then is able to start in the next game. They usually at least are limited during the final day of practice.

Whether or not he plays will obviously have a major impact on the Steelers’ offense. He leads the league in many statistical categories, and just over the course of the past two games has 20 receptions for over 300 yards and five touchdowns.

The team is also just getting back rookie starting wide receiver JuJu Smith-Schuster, who missed the team’s last game with a hamstring injury, while they are also still feeling out where Martavis Bryant fits in everything, and how big his role needs to be.

Even if he does play, however, the truth is that he could have a difficult task ahead of him. The Bengals have played him about as well as any other team has in the league, and certainly better than either of their other division rivals. This is thanks largely to Adam Jones, though William Jackson III had a number of plays in coverage against Brown in the last game.

Taking on a team he has often had to battle against for yardage while also nursing a toe injury could easily result in some struggles, but that won’t get teams to pay any less attention to him in coverage, which would still open things up for others.

One thing that we do know is that his receiving records are safe for this week. Adam Thielen only caught four passes for 51 yards today, while Julio Jones had just two for 24. DeAndre Hopkins did go eight for 80, but will still be over 100 yards behind.

Larry Fitzgerald entered the day eight receptions behind Brown. The Cardinals are about halfway through their game as I write this and he has three receptions.