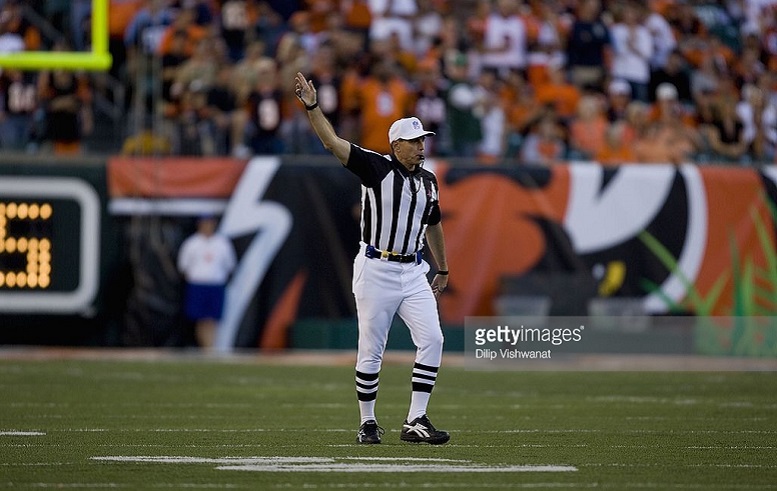 Yesterday, it was announced that referee Tony Corrente and his crew would be officiating the Week 15 game between the Pittsburgh Steelers and the New England Patriots at Heinz Field this Sunday.  Unless you have been asleep for the past 3 weeks, you know that the winner of this game controls the tie-breaker and just has to wait for the Jacksonville Jaguars to lose or tie a game to own home field advantage throughout the playoffs.

There is likely to be a lot of laundry on the field on Sunday, based on the season to date.  Corrente’s crew has assessed 203 penalties so far this season, the highest of any officiating crew, and has been on the field for 3 of the 4 highest penalized games.

The Patriots had a little help from Corrente earlier this season in their win over the New York Jets, when a touchdown by tight end Austin Seferian-Jenkins was overturned.  The Steelers haven’t had the pleasure for two years.

One year prior, Corrente again officiated the Steelers at Bengals matchup.  This time it was the Week 14 meeting on 12/7/14.  This game had a happier ending, with the Steelers cruising to a 42-21 win.  The Steelers played a clean game, accruing only 3 penalties for 20 yards and the Bengals finishing with 7 penalties for 54 yards.  Here is the breakdown:

The Steelers did not enjoy Corrente’s company in 2013.  Going backwards 3 more seasons, the Steelers did see a fair amount of “self-inflicted wounds”, as head coach Mike Tomlin often refers to the lost yardage.  Interestingly, the Steelers gave up more penalty yards in the games they won, including a whopping 163 in a home blowout over the Oakland Raiders:

Penalties can be a major factor when the Steelers play the Patriots this Sunday, especially with a defense that will be missing star inside linebacker Ryan Shazier and may not see the return of cornerback Joe Haden.  Especially when the opposing quarterback Tom Brady is so successful when requesting flags to be thrown whenever he wants one.  Here’s hoping the Steelers keep it clean and limit the number of yards they give up to Corrente and his crew.